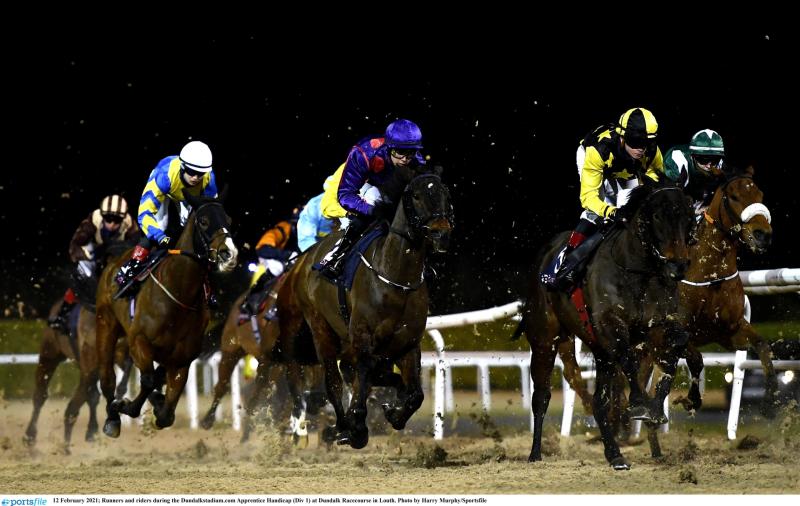 First finishes first in the first

The card last Friday opened up with the Dundalk Winter Series Leading Trainer & Jockey Championship Handicap and saw the Joseph O’Brien-trained First Blood (7/2 fav) run out a good winner on what was his first try at the trip of two miles.

It was also 18-year-old winning jockey Cian Horgan’s first career success on what was just his eighth ride. Remarkably, the owners, the Annus Mirabilis Syndicate, were registering their 26th success at Dundalk Stadium.

Joseph quickly completed a double on the card when White Marlin (7/2 jt-fav), ridden by Paddy Harnett, just got up to collar the game, front-running Picpoul in a photo-finish for the Irishinjuredjockeys.com Apprentice Handicap. The winning distance was a nose.

White Marlin had won on his debut at Dundalk on December 15th and is now unbeaten in two starts. He is a half-brother by Mastercraftsman to Eddie Lynam’s Group 1-winning sprinter Romantic Proposal and is clearly progressive.

Being by Kingman out of Enchanted Evening, a Listed-race winner whose dam won at Group 3 level, Lyra Belacqua (9/4) has a lovely pedigree and she gained a precious first career success when landing the Follow Us On Twitter @DundalkStadium Maiden.

Trainer by Dermot Weld, the winner was racing in blinkers for the first time and won well. For winning jockey Donagh O’Connor, it was a fourth success from Dundalk’s first three meetings of 2022.

Having sold for £90,000 as a two year-old but just 1,000 guineas at a Tattersalls Horses-In-Training Sale last August, Kisses Of Fire (9/1) was well bought by current connections.

Owned now by Diego Dias, she is a half-sister to four winners and has a further eight winners in the next line of her pedigree, including Pips Pride, a Group 1 winner as a two year-old. Her value increased considerably by virtue of this Dundalk win.

Winning trainer Jimmy Coogan was also successful on last Friday’s Dundalk card with another filly, Daintree, and has now had two winners from just five runners this year.

Winning jockey Dean Curran has now had two winners from just five rides at Dundalk in 2022.

Daintree was ridden by Wesley Joyce and he recorded his third winner this year at Dundalk when Spirit And Glory (3/1), who carries the colours of the Get Up And Go Again Syndicate and is trained by Mick Mulvany in Kells, County Meath, just edged out Sister Bridget to land the DundalkStadium.com Fillies’ Maiden.

Having won a Barrier Trial at Dundalk last August, trainer Henry de Bromhead had certainly been patient with Barbapapa (10/3 joint-fav), and that judgement was rewarded when the gelded son of Starspangledbanner won the card’s mile maiden on what was just his third start.

Ridden by Mark Enright, the winner’s grand-dam won the German Oaks and, like an earlier scorer on the card, White Marlin, looks progressive. Mark said afterwards, “He’s a fine big horse, a beautiful horse…When he grows into his frame he could be nice”.

The first division of the mile handicap had looked competitive beforehand but the Mark Fahey-trained Adapt To Dan (6/1) made a mockery of that by running out a 3.75-length winner in the hands of Danny Sheehy. It was a third career success for the six year-old, but a first at Dundalk.

The second division was almost as emphatic as the Tom McCourt-trained Philly’s Hope (17/2) scored by 2.75 lengths and, in doing so, gave James Ryan his first success as a jockey. It proved to be a memorable night at Dundalk for apprentice riders.