Inside Track: Jimmy Gray the man who got Heffernan to come back 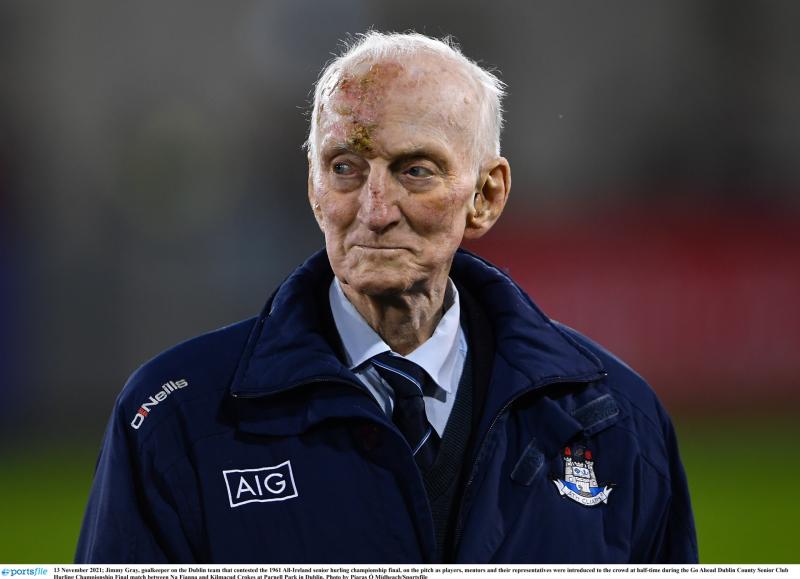 The Dublin-Kerry rivalry of the 1970s may have never come to pass without the influence of Jimmy Gray. (Pic: Sportsfile)

Kevin Heffernan’s second spell on the Dublin sideline, the one that contributed to the greatest rivalry Gaelic football has known, was recalled in an episode of the excellent RTE television series, Shoulders of Giants.

Bernard Brogan, whose father of the same name figured on Heffo’s Army – the one that took to the field – was the programme’s narrator as well as interviewer, and though he wouldn’t have been around to see many, if any, of that sky-blue team’s epic tussles, most of them against Kerry, the younger of the two BBs was well enough versed to add considerably to the programme’s enjoyment.

It was late in 1973, after the Dubs had been knocked out of the championship by none other than Louth – there hasn’t been a result like it since, says he who wore the hooped red-and-white goalkeeper’s jersey that day at Pairc Tailteann (with all the modesty available, of course) – that Heffernan was persuaded to get back involved with the management of a team whose colours he had worn with distinction as a player.

The man who did the persuading was Jimmy Gray, and if there was a disappointing aspect to the programme, it was that no recognition was given to the part the then-chairman of the Dublin Co Board played in twisting Heffernan’s arm.

I was in the North Star Hotel in Amiens Street with Leslie Toal a number of years back when Gray told us the story of why he felt it was absolutely essential to get Heffernan back involved.

As Co Board chairman he had access to selection committee meetings, and it was at one of these that an argument developed over the height of a player. One selector was adamant he was six feet, while another said he was six-one.

Time to put an end to this caper, Gray felt, and it was when the ’73 campaign was over that he sought out Heffo. The carrot he dangled in front of the man he had played with and against in club hurling and football was the role of manager. He’d have selectors with him, but he’d be the one with the final say.

Heffernan had been on the line before that, and it wasn’t the most successful of stints. Your writer can vouch for it that one of the Dubs’ most embarrassing setbacks was, once again, at the hands of Louth. It was a defeat that left Heffo exasperated.

The pitch in Rush, North County Dublin, was wide open to the elements, being close to the sea and with nothing to break the wind. You had to traverse two or three other fields to get to the playing ground, and on this particular Sunday in the late 1960s, with the Players-Wills Cup on offer, the wind was at its angriest, blowing from one goals to the other.

Louth had the elements in their favour in the first half, but didn’t make very good use of them, showing just a point in front at the interval.

Being a betting man, Heffernan, who owned a few decent greyhounds in his day, would have been keen, no doubt, to take even the skimpiest of odds about his charges turning the game around. But maybe more through Dublin’s ineptitude that heroic Louth defending, the lead didn’t change hands.

“What am I going to do with them” Heffernan asked in the car park afterwards when someone – me, more in sympathy than anything else – suggested to him that his team hadn’t done too well. Maybe it was after that game he decided to pack it in.

The first championship match Heffernan faced on his return, in 1974 – against Wexford in Croke Park – yielded a win, but not in a very convincing fashion. So much so, that when Dublin took on Louth in a second round match in Navan, the odds were firmly against them.

But they won, over-turning the previous year’s result; and while it couldn’t have been envisaged at the time, their run in the knock-outs wouldn’t end until they won the Sam Maguire Cup, beating Galway in the final. For the eight years prior to that, Dublin hadn’t reached a Leinster final, never mind win one.

The backing for the team began to grow, giving us terms like “Heffo’s Army” and “Deffo Heffo”. It seemed to be more about the man running the team than the team itself, but there were heroes emerging on the field as well.

Jimmy Keaveney may not have been something new – he had, after all, been in the sky-blue when Heffernan had previously been in charge. But having been inveigled back, like the team boss, he took on the role of a match-winner.

And in what remained of the decade would prove himself a most valuable asset, eagle-eyed with his free-taking and well able to take a goal.

Dublin won another couple of All-Irelands in the decade, laying a long-held Heffernan bogey by beating Kerry in the ’76 final. Their clashes with the Kingdom were legendary,

You had two of the game’s greatest midfielders, Jack O’Shea and Brian Mullins going head to head, Pat Spillane, Mikey Sheehy and John Egan torturing defenders, and on the other side Tony Hanahoe, John McCarthy and Anton O’Toole providing most of the ammunition for Keaveney.

And there was keen rivalry on the sideline as well, Mick O’Dwyer bringing as much to the table as Heffo. More, if you take into account the number of All-Irelands won by both in the 1970s, four and three.

The last two of Kerry’s quartet would be followed in quick succession by another brace, and it would have been five-in-a-row had Seamus Darby not beaten Charlie Neligan with, arguably, the most celebrated shot taken on the Canal End goals.

Club football in Dublin began to spread its wings after that. What was once almost the preserve of north of the Liffey would in time embrace places like Kilmacud and Ballyboden, and, more than that, produce All-Ireland club champions.

Kevin Heffernan is no longer with us, but Jimmy Gray is in his 92nd year. Aside from having played his part in kick-starting the first of Dublin’s great eras, the county’s one-time hurling manager was one of Na Fianna club’s founders.

The Commentary Box: Plenty of links between Dundalk and Derry City through the decades

Hounds led to a merry dance at local coursing meeting