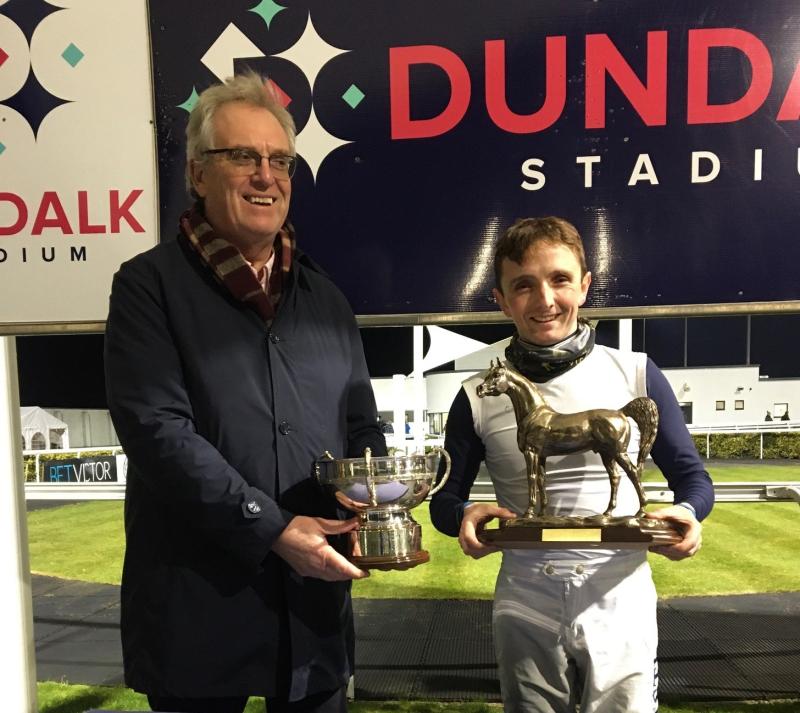 On Friday December 17th, the curtain came down on racing at Dundalk for another year, one that was very rewarding despite problems presented by the ongoing fight against Covid-19.

Many restrictions and protocols were again placed upon the racing industry but those working at the Dowdalllshill based course met those challenges, as ever, with stoicism, diligence and success.

Last Friday again produced some exciting racing on a night when Joseph O’Brien was crowned champion trainer at Dundalk for the fourth-successive year. During that time, he has sent out 117 winners at Dundalk. The latest of them came on Friday when Almanera, ridden by Mikey Sheehy, landed the Irish Stallion Farms EBF-sponsored seven-furlong maiden.

Almanera was Joseph’s 27th winner at Dundalk this year. He is part-owned by the Annus Mirabilis Syndicate, which has now had a remarkable 25 winners at Dundalk in the last six years.

Securing the champion jockey title at Dundalk for the first time was Chris Hayes, whose superb tally of 32 winners this year ensured he finished two ahead of three-time Dundalk champ, Colin Keane, in what was a hard-fought and exciting battle.

Mention also needs to be made of leading owner James McAuley, who had 14 horses carry his colours to victory at Dundalk in 2021, most of which he also trained.

Another person who deserves a note is Jake Coen, who rode a double on Friday’s card on Dalvey, for James McAuley, and Arctic Blaze, for John McConnell. He is one of a number of apprentice riders seen at Dundalk this year who look as though they have very bright futures.

The other Group 3 race, the Al Basti Equiworld Dubai Diamond Stakes, went the way of Bear Story, who is trained by Michael Halford.

Outright champion trainer at Dundalk every year between 2012 and 2017, and joint-winner in 2011 with Eddie Lynam, Michael had another good year at Dundalk with 18 winners, a total bettered only by Joseph O’Brien and Ger Lyons, whose 19 victories were achieved at an impressive strike-rate of 23%.

More litter fines issued in Drogheda than Dundalk throughout 2021