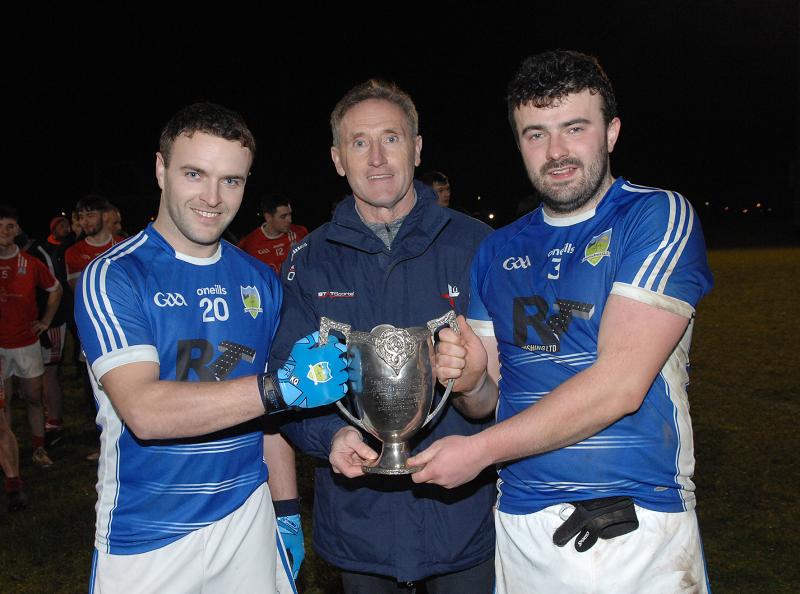 Roche Emmets landed an impressive 2-7 in the final quarter to deservedly take home the Junior 2 Championship at the expense of Hunterstown Rovers in Darver.

It is fair to say that the men from Rathduff got the goals at the right time, with Daire Reilly’s first half green flag coming just before the break, while late strikes from the lively Adam Fee and a remarkable Robert Macken major from distance sealed the championship success for Emmets.

For Hunterstown, experienced forward Padraig Mathews always had eyes for the posts as Rovers tried to supply him and former Togher player Oisin McGee in the inside line at every opportunity.

Mathews landed Hunterstown’s first score of the match after five minutes to get his side on the board after a youthful Roche side hit their opponents hard early on as Adam Fee and back to back James McArdle points had given Emmets a 0-3 to 0-0 lead.

McArdle kicked his first score from play having intercepted a kickout from Hunterstown keeper Donovan Sheridan.

Roche’s pressure was paying dividends on the Hunterstown kickout as they won eight out of their nine restarts with McArdle and Mark Reynolds first to the majority of breaks in that sector, while young half back Aidan Grant saw plenty of the size five early on.

This dominance led to Eugene Murray and Paul Carroll finding the range to give Emmets a 0-5 to 0-1 lead inside 10 minutes. But as long as Hunterstown Rovers were able to seek out Padraig Mathews, you felt they always had a chance of producing some magic at the other end.

And Mathews duly converted a free, before two scores from Oisin McGee and Richie Cunnigham set up by Mathews closed that gap to a solitary point at 0-5 to 0-4 at the first half water break. Nicely poised despite Roche Emmets edging possession.

Fintan Watters was another forward who was an excellent outlet for Roche and Watters set up Adam Fee to stretch Emmets’ lead to two points, but back came Rovers with Paul Doherty and Padraig Mathews white flags to level things up at 0-6 each with 4 minutes of the half remaining.

Padraig Mathews incidentally finished with 22 possessions over the hour. He duly converted another free to give Hunterstown the lead for the first and ultimately only time in the match, and his side looked set to take that somewhat unexpected lead into the break.

Famous last words as the youthful exuberance of Roche was to strike a crucial blow just before the interval. Daire Reilly seized on loose play in the Hunterstown defence.

With one thing on his mind, Reilly set off on a run from the 21-metre line before driving the ball past keeper Donovan Sheridan to give Roche a great tonic at the break as they led by 1-6 to 0-7 as referee Declan Dunne drew the first half to a close.

The second half began with excellent saves from both goalkeepers. Hunterstown’s Donovan Sheridan was first to be called into action, producing a smart save to deny Eugene Murray following impressive set up play by James McArdle.

Roche keeper Sean O’Hare, who replaced the injured Patrick Quigley in the opening half was next to deny Hunterstown’s Oisin McGee as both sides went for the jugular early on. Fintan Watters managed to kick the opening score of the second half to stretch Roche’s lead to 1-7 to 0-7.

However, points from Oisin McGee and Padraig Mathews, before a truly magnificent score close to the sideline from Mathews saw Hunterstown come roaring back to level the tie up at 1-7 to 0-10 after 37 minutes. A score which was met with a major roar of approval from a vocal Rovers support.

However, that would prove to be the last time that Hunterstown registered a score in the match as Roche Emmets sealed victory.

The second half saw Roche Emmets move wing forward Adam McKay back into the full back line to mark the seemingly unplayable Mathews, and it worked a treat as Roche took over, turning over seven of Hunterstown’s final 11 attacks in the match.

If Mathews’ point was worth a watch, then half time sub Robert Macken’s was not too shabby either as his effort from distance found the range to put Roche ahead again, a score which was met by equally vocal support for the Rathduff side.

Another James McArdle free gave them a two-point lead before Adam Fee turned and swivelled to give Emmets at 1-10 to 0-10 lead at the second half water break.

Roche’s early ball into forwards Adam Fee and Fintan Watters continued to cause havoc for the Hunterstown defence. Two further Eugene Murray points followed, before Mark Reynolds set up Watters whose battle with the experienced David Brennan was an intriguing watch, for another white flag.

Adam Fee’s goal effectively put the game beyond Hunterstown’s reach at 2-13 to 0-10, McKay then helped himself to a point, a score that was warranted given his efforts to combat the threat posed by Padraig Mathews.

But the best was saved for last as Robert Macken’s long ball from distance deceived Donovan Sheridan to hit the back of the net to seal Roche Emmet’s victory in this Junior 2 Championship final.

Inside Track: Naomh Mairtin weren’t alone in their disappointment