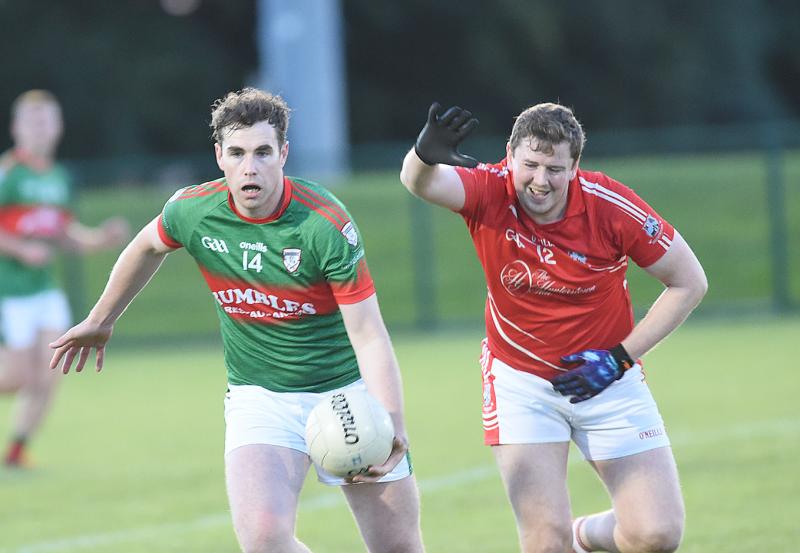 It was a day to forget for the Glen Emmets in the Faithful County as they ran into a rampant, determined Clonbullogue outfit who took no prisoners as they coasted to a nine-point win in Gracefield.

It was a fiercely fought encounter with nine yellow cards, one black and three reds shown by a busy referee Keith Sheerin. The three reds were all shown to the Louth junior champions who lost their composure as a sensational 50th goal from the brilliant Keith O'Neill ended the game as a contest.

It was a very messy finish by Glen Emmets with Evan English, Andrew Mooney and Keith Boylan all getting straight red cards for separate incidents late on. Apart from that, it wasn't a dirty game and Clonbullogue had to play well to win against tough opposition.

Glen Emmets were more competitive here than the final scoreline might suggest but at the same time, the Tullamore based side always looked like they would be good enough to win.

Their defence was superb on the day, holding their opponents to just five scores and despite having the reprieve of not needing to deal with county star Conor Grimes, they still had to dig deep into the well to keep the likes of Ronan Grufferty, Keelan O’Neill and James Butler very quiet.

Meanwhile, up front Keith O'Neill produced another man of the match display. The U-20 All Ireland winner with Offaly tortured the Glen Emmets defence, running at them at pace and scoring 1-5, 1-2 from play.

They were assisted by a wasteful visiting attack who kicked nine wides and some of these should have been scored – the winners had just three wides.

The South Louth club had first use of the wind and took the lead through Kealan O'Neill, but Clonbullogue soon settled. Jamie Guing got three points, two of which were from frees and he almost got in for a goal too but hit the post.

Shane O'Brien got a point as the Offaly men kept possession before Ronan Grufferty's point left Glen Emmets trailing by 0-4 to 0-2 at the water break.

Keith O'Neill then found his form, getting two points, one from a free, while Guing added a free to leave their side up by 0-7 to 0-2 at half time. By this stage, a bit of indiscipline had crept into Glen Emmets game and they picked up four yellow cards before the interval.

With the pitch becoming heavy, the men in red and white kept pushing and a Keith O'Neill free put them six clear at the start of the second half. A deflected goal from Andrew Mooney in the 37th minute brought Glen Emmets back into it, but it proved to be a false dawn.

An excellent Jack McEvoy point settled Clonbullogue back down straight away and Keith O'Neill added a point after a Joe Foran punch was blocked. They led by 0-11 to 1-3 at the second half water break when a black card for Jack McEvoy gave Glen Emmets a chance.

James Butler came closest to bringing the Tullyallen men back into the contest when his strike from close range was well saved by Cian Corcoran. He did manage to get his hands on the ball again and duly pointed, but that proved to be Glen Emmets last score.

A super individual goal from Keith O'Neill, created after impressively racing across half the pitch, put the tie well and truly to bed and even without those late red cards, it was hard to ever see them finding a way back into the game from here with the Offaly men picking up a deserved victory.

A great year for the Glen Emmets where they successfully booked their spot back in the Intermediate ranks comes to an end on a low point, but Ronan Lambe has plenty of young talent to nurture as they look to build on their Junior Title in 2022.