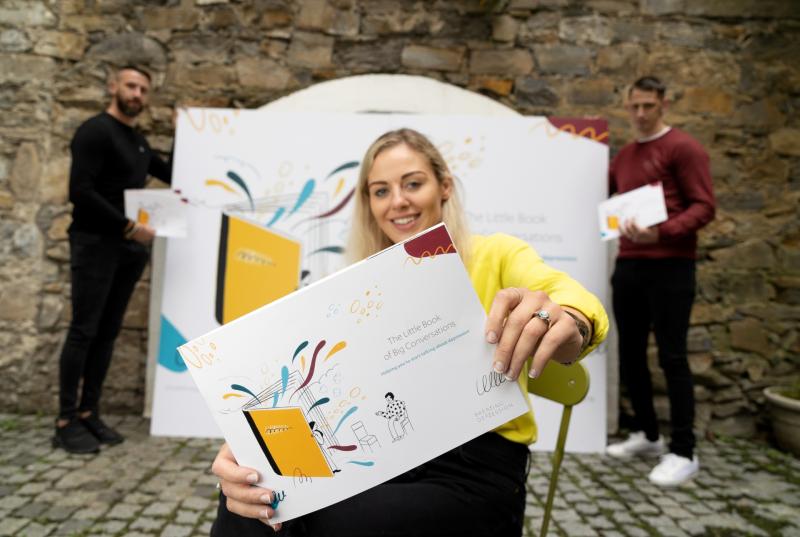 Former Dublin footballer Nicole Owens at the launch of the The Little Book of Big Conversations, which will give people vital advice on how to talk to those dealing with depression

Launched by Janssen Sciences Ireland UC, the campaign comes as new research reveals that almost half of Irish adults (47%) do not feel equipped to have a conversation with a family member or friend who they suspect may be experiencing a mental illness.

That comes despite almost two thirds (62%) having more empathy towards mental illnesses, such as depression, compared to before the COVID-19 pandemic.

A public survey of 1,000 people in Ireland, conducted by Empathy Research on behalf of Janssen, found that 78% of adults would be likely to have a conversation with a family member or friend who they suspect may be experiencing mental illness.

However, there was concern about upsetting the person they are speaking to (81%), saying the wrong thing (79%), or not understanding the other person’s experience (73%).

A new resource, The Little Book of Big Conversations has been created to support people living with all forms of depression, their family members and friends. It is full of practical advice to help make those big conversations about depression a little easier.

The book is part of a larger Global campaign created by Janssen in partnership with people living with depression and their loved ones and with the support of GAMIAN-Europe (the Global Alliance of Mental Illness Advocacy Networks Europe) and EUFAMI (European Federation of Associations of Families of People with Mental Illness).

Ireland has one of the highest rates of mental illness in Europe and it is estimated that approximately 150,000 people per year are living with severe depression (also known as Major Depressive Disorder or MDD) in Ireland.

Maurice Shanahan, who has spoken about attempting suicide as a result of depression, said: “Back then I could never have dreamt that I would be married with a baby girl and the joy and love that comes with that.

"Although many people struggled to understand what I was going through, they never gave up trying to talk to me or get me out of the house to puck a ball around. If it wasn’t for my friends and family continuing to support me, I would never have reached a turning point in my journey.”

Nicole Owens, who has been living with depression since she was a teenager, said: “Once I had that first conversation with my Mum and opened up about how I was feeling it was like a weight had been lifted from me. It didn’t mean everything was instantly better, but I now had somebody on my side, and I was no longer on my own.

"Looking back, I always knew my mum was there for me, even when I wasn’t ready to talk.  If someone decides to open up to you, be patient, show you care and keep checking in. Sometimes it is even the small gestures, like a text message to show you are thinking of them, that can really help.”