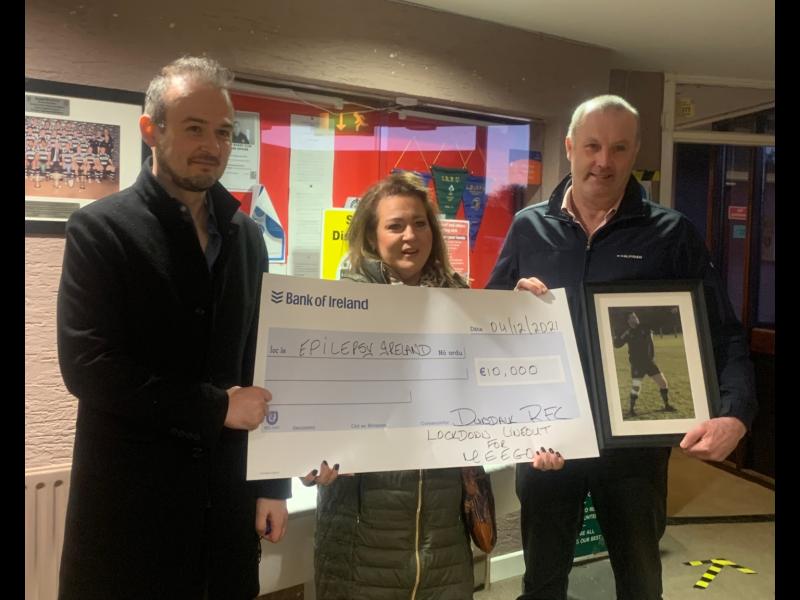 Caolan passed away in May 2020 during the height of lockdown restrictions making his loss even more distressing and solitary for his teammates and family.

So when it came to the 1st anniversary of his death the squad alongside club PRO Mary Murdock and club member Maria Greene stood shoulder to shoulder with Meegos family planning to run 20km over the May bank holiday weekend to honour his memory and raise funds for Epilepsy Ireland.

‘Meego’s Lockdown Lineout’ was a great success and thanks to the generosity of local sponsors, and Meego’s family and friends, they managed to reach their target of €10,000, which was presented to Stephen Lowry of Epilepsy Ireland by Stephen’s parents Patrick and Julie.

Club PRO Mary Murdock praised the efforts of all involved:

“Their wish in planning this event was that a life so beautifully lived would be remembered. Meego would have been so proud of his squad and of his family and there was a special connection forged between them both [family and teammates] on that May weekend which was a privilege to be a part of.”

Ms. Murdock also paid tribute to Meego speaking of the boy she watched growing up from the time she first met him as a mini and whose many moments on the pitch she had the unique privilege of capturing on camera.

“When something like this happens players think of the little moments, the little details of the good times shared with people.”

“For the Dundalk RFC senior squad they have had to face going back into the dressing room and seeing the space where Meego used to sit.”

“They have the memory of him but they have to face the reality that Meego is not there anymore.”

“They will live with the love Meego left behind and as they Lineout in the Dundalk jersey they will always have their 16th man at their side and in their hearts.”