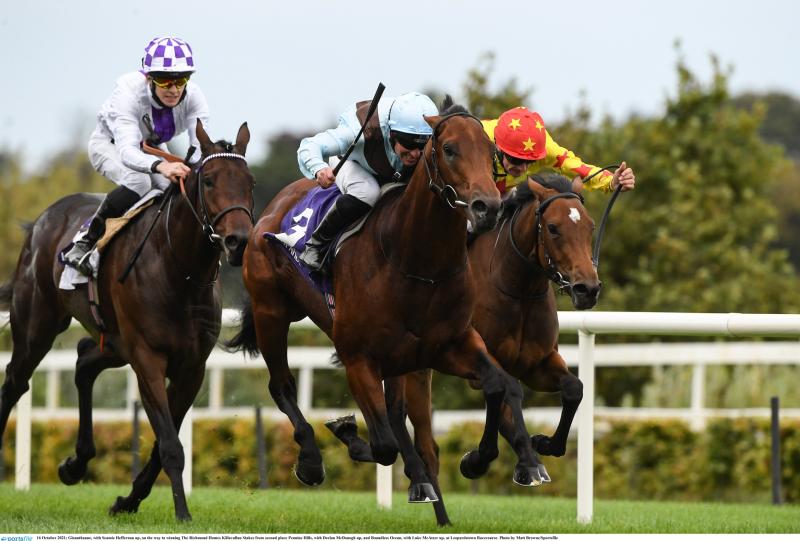 That’s another box ticked. Getting the piece of luck she deserved, Eglish, the horse that has commanded more space on this page than any other equine – even Chew It Over, he, the one-time winner, of honoured memory – skated up at Dundalk recently.

Being a midweek afternoon meeting, there was no-one else present from the multitude who have a share in the Ado McGuinness-trained mare, and I was, therefore, given the honour of leading Eglish in after she had come home clear of her ten rivals in the DundalkStadium.com Handicap.

Pity I wasn’t able to tick the other box I spoke about here a few weeks ago – having that much coming back off a winner, the bookie wouldn’t have enough in the satchel to pay me in cash. Some day, maybe.

Eglish, however, didn’t go to the post unsupported. Just over 3/1 the night before, she was a drifter on the day, going off a 5/1 shot, and there were a few quid on.

The race was for handicappers rated 45 to 70, and anyone who knows anything about horse racing will tell you this is not the most exalted company to be keeping.

But regardless of how fast she can go, Eglish is genuine and in bringing up a sixth career win – her fifth at Dowdallshill – she reacted willingly to apprentice jockey Cian MacRedmond’s urgings. She was kept on the inside throughout from a low draw and was an easy enough winner.

There were photographs to be posed for in the winners’ enclosure, and a trophy to be accepted, and while all this was going on, paddock commentator, Will Reilly, gave a mention to the book, The History of Dundalk Stadium, which I co-wrote with racing historian, John Kirwan, a couple of years ago.

Being one who likes to swerve centre stage, it didn’t displease me that there was only a handful at the meeting; but it was still a good place to be in.

This win came as I was beginning to believe Eglish might never shed the ‘unlucky’ tag she had acquired for herself in recent times. (Or, indeed, I was the jinx which a chap who’s been following the horse’s fortunes lately, constantly laying out money on her, called me when we discussed the ill-luck she’s had, at a recent football match.)

On the Friday night prior to her latest success she was out at her favourite track, bidding for a win in an apprentice race. The chap on board, Robert Whearty, was in form, having scored a double at the Dowdallshill meeting earlier that week.

And when he took Eglish to the front inside the final furlong, me and my regular racegoing partner were in full voice in the stand. But when she got to the line she was only in fourth, beaten just over a length.

The subsequent unsaddling enclosure inquiry revealed jockey Whearty had dropped his whip about a furlong from home and that done her chances.

More than that, it was also said that on the night Eglish got short-headed in a race late last month, her pilot that evening, champion Colin Keane, had the same misfortune.

School attendance prevented my racing pal from being present. He wasn’t chuffed to have missed out, but is hopeful there’ll be other occasions when he can cheer Eglish home a winner, and maybe even stand in for a photo.

VIDEO: Look for Louth this Christmas