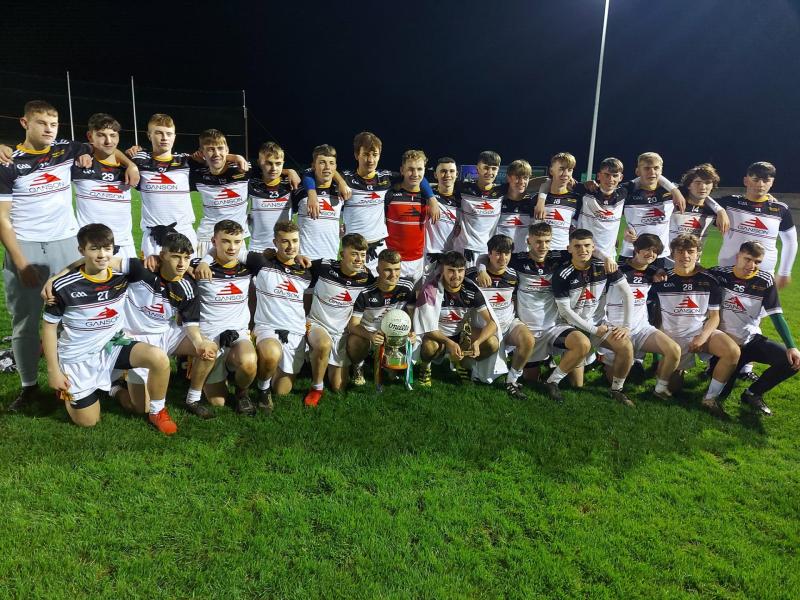 It took over two hours of football to decide the destiny of the Fr Larry Murray cup. Two evenly matched sides slugged their way to a beautiful strike of separation.

Andrew Wogan’s free at the death would nudge his combination side of St Kevins, St Michaels and John Mitchels into the lead crucially at the death just before referee Kevin Brady blew the final whistle.

And so with the final kick of the game, Wogan delivered the punishing blow to a determined St Fechins outfit who looked like they were going to pull off an unlikely victory.

There was a huge crowd to witness the drama and despite the score line, they were served up an entertaining affair in Hunterstown on an eerily mild November evening. Friday night lights twinkled in the background to the youngster’s biggest day.

So far in their fledgling careers, they’ve had to deal with two pandemic disrupted seasons, handling the nerves before the senior final and then bottling up those tensions further for another two weeks before the replay.

So regardless of the result, the players did themselves proud, played the game in the right spirit and most importantly gave their all. Sean O’Driscoll was man of the match the first day and the Fechin’s wing forward continued that right vein of form with a goal in the second minute of the replay.

Fellow drawn game hero Caelum Dolan kept a looping Cathal O’Reilly ball alive long enough for O’Driscoll to run onto it and bury to the back of the net.

With the early goal came the flurry of confidence, but the seasiders failed to push on and instead wasted a lot of possession and energy for very little reward.

With the lead to defend, St Fechins were managing the game perfectly, midfielder Shane Reilly was winning gritty ball around the middle of the field and Christian McCloskey came out with turnovers time after time.

However, the combination side were in no mood to panic. Comfortable in possession, they slowly but surely grabbed a grip of the final.

Seán Reynolds started the final on the forty, the highly influential Stabannon player’s positioning further up the field was a bonus in creativity but the amalgamation outfit were clocking up the wides. They had six before Cameron Maher eventually opened their account with a free.

The wides did highlight their dominance however and Reynolds soon landed an excellent point to narrow the gap to one. The intensity in the tackling cannot be understated, both teams fought for every ball, Mitchels man Jamie Durnin engineered some space to make and take a mark to level the game at 1-0 to 0-3 on the stroke of half time.

Durnin began the second period like he ended the first with a point, this time instinctively kicking the ball off the deck when he knew he wouldn’t have got the shot off otherwise.

Now with the lead for the first time in the replay, it looked like only a matter of time before the combination men would pull away. Maher and Wogan landed frees to deservedly make it double scores at the second half water break.

Then Aaron McGlew nearly singlehandedly inspired his side to victory. The Louth minor was magnificent the first day, having just buried his grandfather and Louth stalwart Paddy McGlew before that drawn game, it highlighted the character he possesses.

In that final quarter, McGlew was pure determination. Playing in a more advanced position at that point, he walloped over the score of the game before lobbing Joe McArdle to give them a miraculous one point lead with minutes to play.

McGlew collected the wayward kick out and, without thinking, sent it sailing over the combination goalkeeper's head for a moment of pure magic.

However with time on the clock, the amalgamation side didn’t panic, they worked the ball to man of the match Maher who, on the run pointed over off his trusty left boot to tee up Wogan’s memorable finale where he bagged the decisive winner.