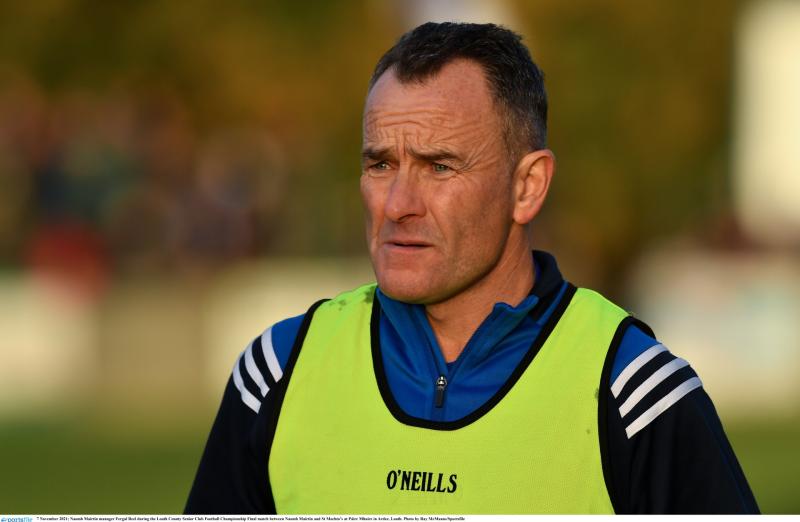 In his second season in charge of Naomh Mairtin, perennial Joe Ward winner Fergal Reel was quick to deflect the attention away from his feat onto his triumphant players.

“It’s great to win”, stated Reel who was collecting his sixth Senior title as a manager following the game with St Mochtas in Ardee last Sunday. “Two in a row is nice especially this year with the crowd,  as last year was behind closed doors.

“This year it's out in front of everybody. Last year was the most difficult challenge for me, it was difficult to keep everyone motivated and it was stop start but today is a sweet day.

“I put a bit into it, I put my own stamp on it but the lads at the end of the day if they don't have the stuff, it's not going to happen. We have the stuff and we're making the best of it. They're really buying into it, they're a great group of lads to work with, it's a sweet day for Naomh Martin.”

Despite St. Mochta's bright start, Reel felt his players dealt with the pressure of being favourites well thanks to a lot of preparation behind the scenes that left nothing to chance on the big day.

They knew The Louth Village men could be dangerous and were ready for a battle last Sunday. Their opponents fought tooth and nail early on in what was their first final, however in the end the experienced heads on St Martins proved pivotal to their success.

“We were concerned going into the game,” he revealed. “First you go in as favourites. We don't put that tag on ourselves, somebody else does but we have to deal with that.

“We had to deal with a good side and we had to be organised and set up well and look at the videos and dissect it and make sure we were right for it. It took us a while to break that down and sort it out. They came at us but eventually we got to the grips of it and grinded it out.

“Maybe the boys in the field started to deal with it (better) after the water break. We started to push on a bit, got a bit of distance between us and maybe from there on we dictated the game.”

Danny Kindlon’s black card had a huge say in the contest, with the numerical advantage in tow, the holders knew what to do. Despite the Mochtas putting everyone behind the ball, The Monasterboice men still managed to rack up an impressive tally of scores.

“The black card was probably a big hit on the Mochtas,” Reel agreed. “We, as you would expect, took advantage of that and we got five, six, then seven point lead and we probably didn't start as well in the game and that's credit to the Mochtas.

“But it's always over the hour, we, in the final quarter of the game, we expressed ourselves really well and probably sealed it.”