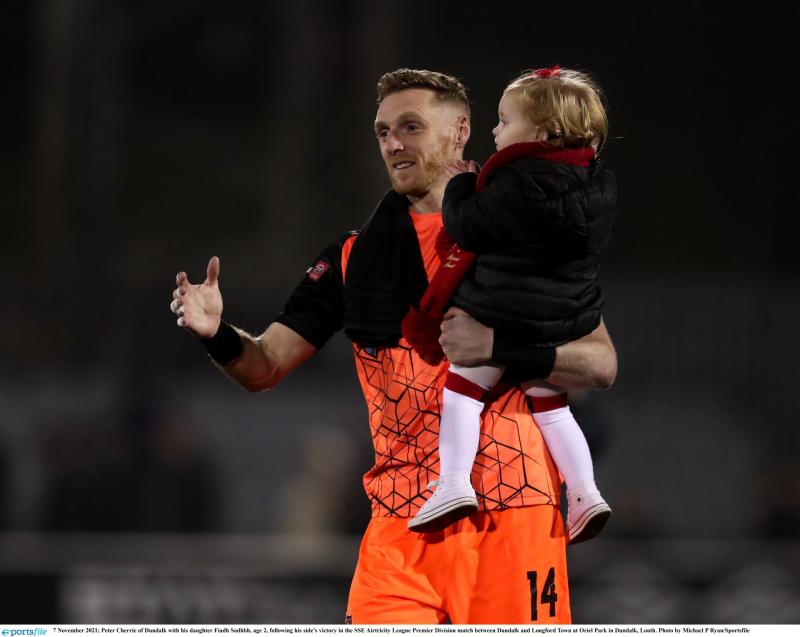 Vinny Perth was happy with the win over Longford. Speaking after the game he revealed that Greg Sloggett won’t play for Dundalk for the remainder of the season.

Sloggett was injured for the Drogheda game on Thursday. He only lasted 10 minutes on Sunday after a recurrence of his injury. The lilywhites only have one game left against Derry; he is suspended for that game.

Perth also confirmed that Patrick McEleney has played his last game too. He signed a pre contract deal with Derry in the summer. Ironically, he was badly injured in a dreadful tackle against the Candystripes ten weeks ago. He’s been out since then.

Newly appointed Shelbourne boss Damian Duff was in the stand running the rule over Dundalk players as was Portadown boss Mathew Tipton. Former Dundalk player Mick Doohan was also there. That was just to see the game.

Doohan is a Lillywhite legend. Both he and Tom McNulty got the winning goals that won the League title in 1995. The team was managed by the great Dermot Keely.

Last Thursday night Dundalk all but secured their Premier Division status with a 1-0 win over Drogheda United in the Louth Derby.

It was their second win on the trot and virtually completed the aim of Vinny Perth and his then employers Peak6 to keep Dundalk in the Premier Division and restore stability among the team on the pitch also.

Perth took Dundalk on a decent run in the Europa Conference League also, which netted over €900,000 for the club. He also brought the club to the FAI Cup semi-finals. They just failed to make it to the final for the 7th year in a row.

A lot of fans were disappointed they did not make the final. However, the most important thing was for Dundalk to maintain their premier Division status. Getting involved in a play-off would have been a disaster.

The return of Daniel Cleary was pivotal to stabilizing a defence that leaked goals earlier in the season. Perth maintained after the Drogheda game that his starting 11 would be good enough to win a league title and that was now believable. That could not have been said a few months ago.

But the biggest switch I believe that brought the confidence back to this Dundalk team was restoring Peter Cherrie as goalkeeper. For most of the season Peter had to watch from the benches at a Dundalk defence that leaked many goals. Many of them could have been avoided.

He did get a chance in the first team once. Jim Magilton had him in goals against Longford. Jim was caretaker manager at the time. Peter made two terrible mistakes that resulted in goals for Longford.

Magilton did not pick him again and when Vinny Perth arrived, he still did not make the team. Dundalk signed a 3rd keeper Cameron Yates when the transfer window opened in July.

Perth put Cameron in goals against Longford and unfortunately the Scotsman made a bad mistake that gave Longford the game. Alessio Abibi, the regular first team keeper was restored to the side. He had a magnificent game against Vitesse in Holland in the Europa Conference League.

However, as the last quarter of the league arrived Dundalk hit the lows of the play-off place in the league which is second from bottom. Perth turned to Cherrie and Dundalk never looked back. They played like a team that showed confidence, belief and stability.

This was also helped by a recovery from injury by Sean Murray who was sensational. And it was a team effort from all players that saw Dundalk play like the Perth and Kenny squads of the past for the last quarter of the season and that lifted Dundalk out of the dreaded play off zone.

The club made massive mistakes in their recruitment of players in the close season. What went on in December 2020 and January 2021 saw serious recruitment mistakes being made. Peak6 must take the blame for this as they were paying out the money.

One or two players got contracts that were just plain mind boggling. Key players were let go. A new Sporting Director in Jim Magilton was brought in to run the club in December 2020. How much of a role or say Jim had in bringing in the new players I have no idea?

He quite possibly had no say, as it looked from the outside as if the chairman Bill Hulsizer was doing all the recruitment. Dundalk’s new team had several players of different nationalities. They had good ability individually, but sadly this experiment of playing so many international players just simply did not work.

Some departed. Some stayed. The main three of Sonni Nattestad, Alessio Abibi and Raivis Jurkovskis that did stay gave their all for the team and the club. They were brave young men coming to a foreign country.

It can’t have been easy for them, as the team continued to lose or draw and the whole squad came under pressure. But the above three players continued to give their all for Dundalk. Two of them also played on the international stage. Ravis plays for Latvia while Sonni plays for the Faroe Islands.

The chaos at the start of the season was there for all to see. Filippo Giovagnoli was officially appointed manager in December 2020. Fifteen minutes before a national press conference four weeks later and assistant manager Shane Keegan was given the manager’s job.

Fillippo was told he was no longer manager but had the post of coach. At the press conference we were told of the changes by Jim Magilton. The move never worked and Keegan walked. Filippo also left as coach. Jim Magilton stood in as Caretaker manager, but he failed to turn the tide also.

Then came Vinny Perth. He was appointed by Bill Hulsizer. Jim Magilton had wanted former Dundalk player Dave Rogers as boss, but it was the club’s former gaffer that got the job. Vinny was determined to fix things at Oriel.

He lost the best midfielder in the country in Chris Shields when he went to Linfield. Luckily Sean Murray was returning from injury and he filled Chris Shield’s shoes to some respect later in the season.

The Dubliner had to cope with Patrick McEleney signing a pre contract deal with Derry and then the news of Michael Duffy doing the same thing with the same club. There were also massive rumours that Pat Hoban was moving to Linfield with Chris Shields. This did not happen.