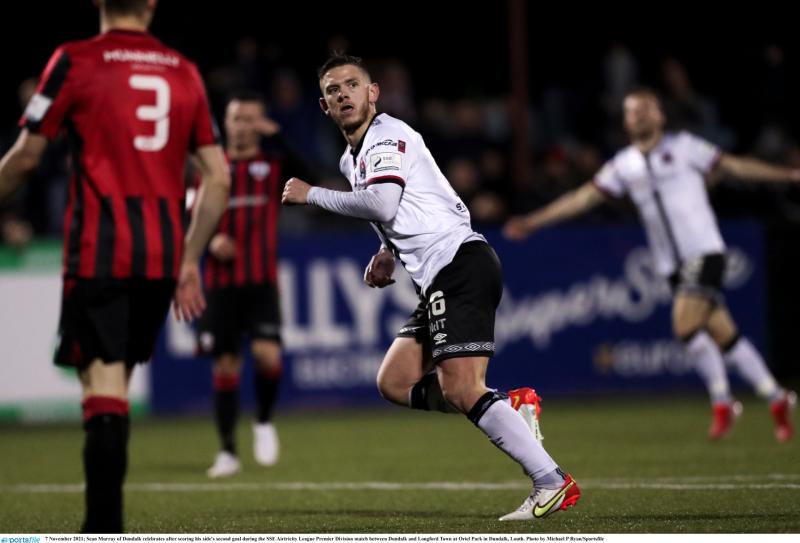 Dundalk FC are safe for another season in the SSE Airtricity League Premier Division after beating already-relegated Longford Town 2-0 at Oriel Park on Friday night.

Needing just a point to effectively secure their Premier Division status, second half goals from Patrick Hoban and Sean Murray put an end to Vinny Perth’s relegation fears, but that was only after what was a forgettable opening half at the Carrick Road venue.

Despite the high of beating their Louth rivals Drogheda United on Thursday night, there was a somewhat subdued atmosphere at Oriel for this Sunday evening kick-off.

And, the football out on the pitch certainly reflected that, with not a single chance created at either end throughout the first 25 minutes or so in what was a scrappy affair.

Indeed, it wasn’t until the 28th minute that the game had its first shot, with Murray’s corner from the left eventually finding its way to Hoban after Longford failed to clear their lines, but Dundalk’s top scorer could only volley into the hands of Lee Steacy.

Such was the poor fare on display throughout the first half, the next opening didn’t occur until first-half stoppage-time when after Daniel Cleary’s cross-field pass, Michael Duffy got the beating of Shane Elworthy before firing straight at Steacy from a tight angle.

Dundalk came out of the blocks in the second half, which wasn’t even 60 seconds old when a lovely exchange between Will Patching and Duffy saw the latter’s cross headed in off the crossbar by Hoban, as the Oriel crowd awoke from its collective slumber.

Buoyed by that goal, The Lilywhites almost doubled their lead on 50 minutes when Duffy forced a magnificent save out of Longford goalkeeper Steacy from just outside the box.

The hosts did make it 2-0 three minutes later, though, when Hoban’s pass was nicely flicked on by Daniel Kelly before Murray rifled home with a low drive in off the post. Kelly should have got himself on the scoresheet when he turned over from a Darragh Leahy cross on 56 minutes as Dundalk sought to put the outcome beyond any doubt.

Murray’s free-kick from the left eventually found its way to captain Andy Boyle, whose shot in a crowded box had to be blocked out by Longford defender Aaron O’Driscoll. Duffy was causing Longford problems, and his shot was narrowly deflected off target by O’Driscoll, not long before Steacy had to claw away from the Dundalk winger’s attempt.

Longford’s first attempt of the night came six minutes from time when Rob Manley – after collecting a pass from Conor Davis – forced Peter Cherrie to save with his feet. In stoppage-time, Aaron Robinson cracked his free off the bar in what was another frustrating night for relegated Longford, but for Dundalk, their safety is now assured.