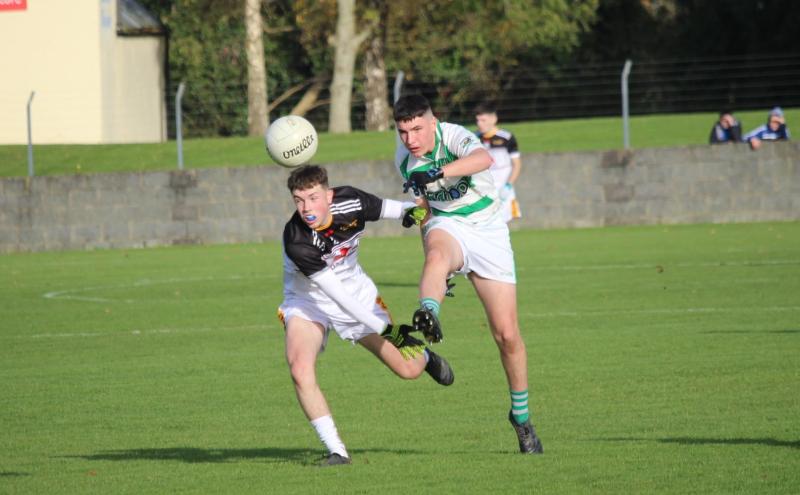 An action shot from the U17 A Football final between St Kevin/St Michaels and St Fechins in Ardee. (Pic: St Fechins GAA Facebook)

LMFM U17 A Football Final

St Kevin/St Michaels and St Fechins will have to do it all again in two weeks’ time as a late free from Caelum Dolan resulted in this engrossing tie finishing in a 1-8 apiece draw.

In a game played with at a surprising amount of aggression and grit for this level of football, both sides had their purple patches on a day in which their defences shone the brightest in the Ardee sunshine.

Both teams deployed defensive tactics in the first half, the amalgamated side taking Sean Reynolds out from the full forward position and instead playing him as an extra defender who looked to win any ball that was kicked long.

The Termonfeckin men meanwhile tended to hunt in packs, hounding any player in a black and white jersey that dared venture forward, three or more men tackling them and forcing turnovers.

After a cagey opening five minutes the game sprung into life when O’Connells clubman Evan Kearney was given a black card for tripping up Cathal O’Reilly. However it wasn’t St Fechins but St Michaels who benefited as they went through a mini purple patch.

Aaron McGlew pointed from a free shortly after Kearney’s departure but over the next 13 minutes the St Kevins/St Michaels outfit struck over five unanswered points. Andrew Wogan was unplayable as he bagged three scores while Jake Corrigan and Jamie Durnin also pointed.

St Fechins were still forcing turnovers, but their problem was getting their marquee forwards onto the ball as time and time again loose kicks went into the hands of an opponent leading to them having to soak wave upon wave of endless pressure.

They trailed by four points but were given a lifeline just before half time, Ben McCabe got onto a high ball in the corner, turned his marker and duly teed up the awaiting Sean O’Driscoll who fired home from close range to leave just a single point between the sides at half time, 0-6 to 1-2.

Robert McCarthy quickly levelled proceedings seconds into the half, but the men in Black and white soon bounced back with an equaliser from the boot of Jason Woods. However from here they were kept scoreless for the next 15 minutes.

They were struggling to deal with the pressure put on them from the Fechins defenders, this despite the fact Sean Reynolds was now being deployed a lot more as a link up player in attack rather than an extra defender.

They also lost control of their own kick outs leading to three points in a row for their opponents as Sean O’Driscoll (2) and Aaron McGlew showed their class to leave St Fechins 1-6 to 0-7 in front at the final water break.

It was the amalgamated side that came out of the break the stronger, striking the net almost immediately after the restart to regain the lead on 48 minutes.

Sean Kearney, who had earlier been black carded, kicked for a score from distance but it dropped short of the target and into the top left corner of the net for a vital three pointer. The momentum was back with them.

Reynolds was now getting more possessions and it helped to find some holes in an impressively well drilled Fechins reargaurd, yet all they could muster was one more point again from Kearney.

St Fechins was the more aggressive at this stage and twice should have scored a second goal but as the tie drifted into added time they still trailed by a point.

Up stepped Caelum Dolan who showed nerves of steel to raise a white flag from a free, meaning the two sides will have to do battle once more in a fortnight’s time. The replay has been fixed for Friday the 19th of November in Hunterstown (Throw 7:30PM).