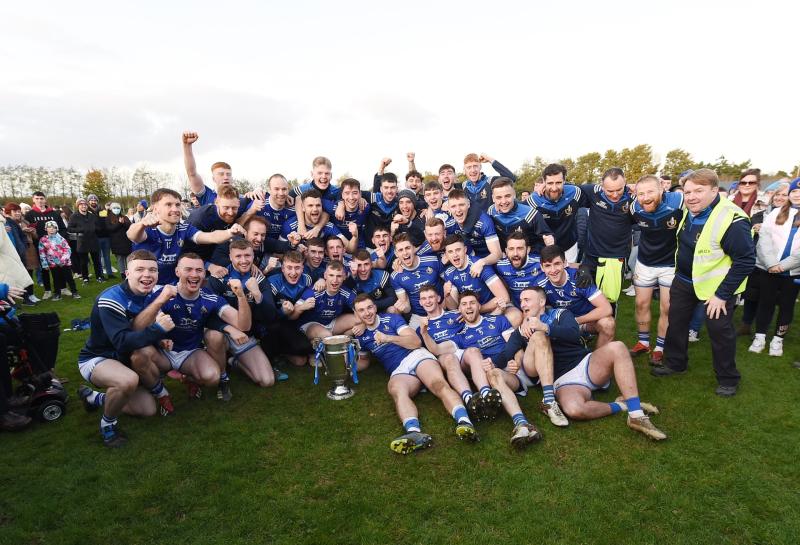 In many ways this final went exactly as people expected, the Martins showing their class to record a second Joe Ward Cup in as many years. The storyline was easy to predict, but the final deficit was definitely surprising as the Jocks coasted to a 11 point victory.

After such heroics from St Mochtas throughout the championship, neutrals were hopeful of at least seeing a decent contest but following the black card and of Danny Kindlon the Louth Village side's early challenge evaporated. Five scores in a row in this ten minutes a sign of things to come.

Four of the next six scores in the third quarter put to bed any slim hopes of a comeback, bringing an end to St Mochtas fairy tale story as their supporters could only look back and admire the sheer brilliance of the county champions.

The Martins dominated the opening five minutes, wave after wave of pressure resulting in scores for Sam Mulroy and Conor Whelan.

They were at their best when moving the ball fast, a game which relied on them winning midfield and then kicking it long into full forward line of Conor Whelan, Mulroy and JP Rooney.

The Mochtas were playing against a stiff breeze and as a result were more patient on the ball, looking to get it up the pitch slowly. They deployed the Byrne Brothers up top and a lack of service to them was a problem throughout the 60 minutes.

When they could get near goal they were drawing fouls and while they barely had any wides they relied solely on frees for scores, with all seven of their final tally coming from placed balls from the boots of the Byrne duo.

To their credit they contained the Martins as best they could in the opening quarter and trailed by just two points at the first water break. However just before this late stoppage on 21 minutes their chances were given a huge blow with the dismissal of Danny Kindlon to a black card.

Mulroy broke free from the shackles of the Mochtas defence and was duly brought down and from here it was sadly one way traffic.

After the water break Kieran Quinn did everything he could to contain the Jocks, throwing pretty much everyone behind the ball in the hopes that they could negate their advantage as much as possible.

Sadly these tactics backfired as the reigning champions blew the men in Blue and Yellow apart in the lead up to half time.

Their dominance came through a series of turnovers from the Mochtas Kickouts as well as an ability to draw frees whenever they ventured forward. Wayne Campbell really came into this game during this period with two super scores teed up around the middle from turnovers.

Elsewhere the points came from Conor Whelan and Mulroy frees as Naomh Mairtin took a deserved 0-8 to 0-2 lead into half time.

Quinn’s troops have been the masters this year when it comes to somehow coming back from the brink of defeat and to their credit they never gave in despite the Everest of a mountain that was put in front of them.

They managed to keep their opponents to just a single score, a Mulroy 45 in the first 10 minutes and cancelled that out with another free from Declan Byrne, won by his Brother Ciaran in a rare good team move for their side.

But overall, the Brothers were just not getting the service, when the duo are kept quiet it is always going to be tough for them to muster much of a challenge. They continued to be deployed deep, Ciaran dropping back at times but they were just too isolated from the game to make an impact.

Without ever having to get out of third gear, Fergal Reel’s troops turned the screw once more to put the contest well and truly behind doubt.

Whelan, John Clutterbuck, Jack Murphy and Mulroy all contributed with scores as they hit 1-5 without reply to create 1-15 to 0-4 14 point gap, the Mulroy penalty on 50 minutes after being brought down by Andrew English seeing many punters head for the exits.

With the game all over bar the pageantry of the Joe Ward Cup being raised, St Mochtas did put some respectability into the contest with a series of three more frees from the Bryne brothers.

The final ended on a sad note as Mick Fanning was given his marching orders for a big hit on Stephen McCooey who left the field in an ambulance before Declan Byrne kicked over a free with the final kick of the game.

The best side in Louth backed up that statement with another county title, while the Mochtas are sure to have learned plenty from their first taste of a Senior Final.

Next up for the Martins is a historic first Leinster campaign, last year’s being cancelled due to the pandemic where they face the Carlow champions at a Louth venue to be determined.