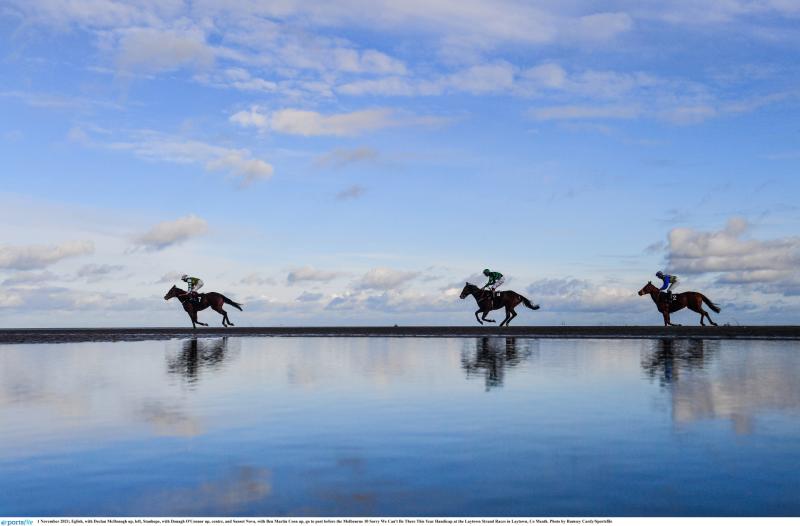 She’s in the news again and might soon pass Jim McCourt, Joe O Cearuill, Rob Kearney, Eve McCrystal, Katie-George Dunlevy and Paddy Keenan in the race for most mentions on this page. But whereas the others – well, some of them – were big winners, Eglish has far more duck eggs than 1s in front of her name whenever she appears on a race card.

This mare, in which I have a very small financial interest – but of late has been causing me to lose interest – completed a north-east treble of a sort on Monday of last week.

Her most recent run was at that most unique of race tracks, Laytown, in a six furlong contest that just had to have the longest title in horse racing history – the Melbourne 10 Sorry We Can’t Be There This Year Handicap.

This was a follow-up to an outing at Dundalk a week earlier and shortly before that a run on the turf at Bellewstown. Third time lucky, perhaps. She hadn’t run well on the Hill at Crockfada, and was then short-headed at Dowdallshill.

Enough to have me and my race-going sidekick, Master Ben, to just look on at Laytown; but, no, the word was that Eglish was a bit of a blot on the handicap, which is as near to someone saying she’s a certainty.

Let me explain as best I can to those who know little about racing, who maybe only see the inside a bookie’s office on the day of the Aintree Grand National, or not at all.

Eglish has two handicap marks, one for what’s known as turf racing, the other for all-weather racing, such as there is at Dundalk.

Her marks dictate what weight she carries in a race. On current form, she is seen as inferior on a turf track, and although Laytown is closer to an all-weather track with its sand and puddles, it is classed as turf. Carrying 10st 6lbs, Eglish, we were told, was ‘well in’.

Time, therefore, to loosen the purse strings yet again. Odds of 3/1 were taken the night before the race, and when she drifted a point the following morning, the Bellurgan bet was hardened. Jockey Declan McDonagh, known as ‘The Enforcer’, would be a plus.

Eglish was out fast from the stalls, but McDonagh soon eased her back. Approaching the business she was in third, perfectly placed to mount a challenge. That she did, but it wasn’t strong enough to improve her position. Third, beaten a half-length and a neck. More money gone – just as well we had filled the Chariot of Ire tank before heading up the coast.

You can see the Cooley and Mourne Mountains from Laytown. No surprise in that, but when I picked out the triangle of trees that form Bellurgan’s Tipping’s Wood I was intrigued.

Go on a straight line from Tipping’s Wood to the top of our road and look out across Dundalk Bay and all you can see is the coastline from Annagassan to Dunany Point. To me, Laytown was hidden behind that, but apparently not.

First meeting at Laytown was held in 1868, but it was even earlier than that when they began racing further down the coast. Blackrock strand’s opening fixture was in 1854, the last in 1903. The records show that there were nine meetings on Termonfeckin strand between 1873 and 1900.

A chance meeting in town the other day and a quick chat had me seeking the aforementioned Jim McCourt’s opinion on the current situation in Oriel Park.

Like many others, this Orielite of long standing wasn’t happy with the way in which this season unfolded; not enough recognition, and maybe none at all, was given to what the club means to the community, he felt.

He doesn’t know who’ll be in charge next season – he’s just hopeful the administration will have a local dimension, which it now will and that the big football decisions are left in the hands of ‘people that know the game’. Inside Track hopes to hear from Jim in the course of the 2022 season.