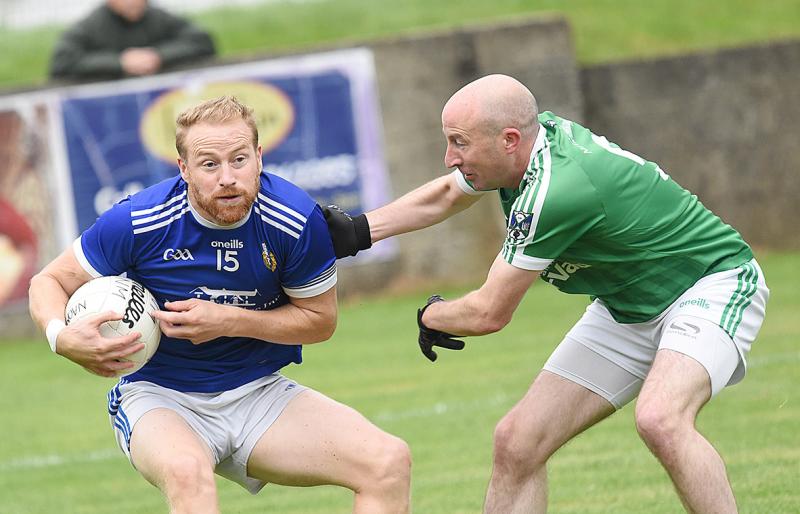 A second half resurgence saw Naomh Mairtin open up their Senior Football Championship defence in Group D with a five-point victory over the Dreadnots in Dunleer.

With talisman Sam Mulroy helping himself to 1-7, the holders did enough to see off the tricky challenge of the Dreadnots, who led by 0-7 to 0-4 at the break. The Martins had another gear or two to reach and they certainly reached it in that second half, with Sam Mulroy scoring 1-4 of their second half tally of 1-7.

This led to the game changing moment of the match, as Mulroy seized on a loose pass from the Dreadnots defence, before firing the ball passed Ciaran Cunningham to level things up at 1-4 to 0-7 minutes after the restart.

The Martins kicked on from that, scoring seven points in a row as Clogherhead failed to register a second half score until stoppage time allowing the Martins to carve out the win.

Naomh Martin comfortably booked their place in the knockout stages of the Senior Football Championship after this comprehensive victory over the Geraldines.

Fergal Reel’s side made good use of a tumultuous wind and led by 1-12 to no score by the first half’s close, Sean Healy was in particularly fine form, kicking two magnificent scores from distance. He finished with a commendable 14 possessions over the hour, with Sam Mulroy touching the size 5 on 15 occasions.

The Louth captain capitalised on a little bit of good fortune as Conor Whelan’s pass was intended for the arriving Evan Whelan, however as usual the county star made the most of the chance to calmly slot passed Gers’ keeper Sean McEneaney to make it 1-10 to no score in first half stoppage time.

Second half sub for the Martins Val Leddy got his name on the scoresheet as the Jocks rang the changes during that second period. However the county champions were in no mood for sentimentality as they rammed in three goals in a row.

The lively Conor Whelan setting up John Clutterbuck for a close range major, before Whelan helped himself to two goals of his own as they ran out emphatic 24 point winners. 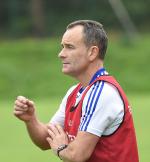 Naomh Mairtin’s quest for a second consecutive Joe Ward Cup still remained firmly intact as they ruthlessly advanced to the semi-finals of this year’s SFC after their victory over St Josephs in a match which was never in doubt.

The Martins pressed up and squeezed the Joes kickout, winning 10 out of 16 in that department, with John Clutterbuck and Sean Healy particularly dominant along with Evan Whelan and Wayne Campbell in the middle of the field.

That fast start was rewarded on the scoreboard, with three Sam Mulroy points (2f) either side of John Clutterbuck and Stephen Campbell efforts putting the Jocks 0-5 to 0-0 ahead at the first water break.

It was then Conor Whelan’s turn to kick three scores of his own, while Mulroy kicked a superb score from distance and JP Rooney helped himself to a point as the Martins led by 0-10 to 0-0 at the break.

Conor Whelan’s goal minutes after the restart increased that lead to 15, before Craig Doherty finally raised a white flag for the Joes on 38 minutes. Two goals from substitute Val Leddy along with a goal from Sam Mulroy saw the Jocks record an easy 22-point win to march on the semi-finals.

Another county man for the royal blues, John Clutterbuck was in stunning form and despite playing right half back, he was everywhere. His early cross field pass to the road end of Dunleer into the arms of Mulroy opened up the Newtown defence.

After the pass Clutterbuck continued his run and Jack Murphy put him in for what looked a certain goal before Blues cornerback Paul Moore was left with no option but to barrel into Clutterbuck for a penalty.

Mulroy blasted to the net and in the next attack Eoghan Callaghan opened up the Blues defence with a driving run. Callaghan could have taken the point, but he kept going until goal was in his range and when it was, he drilled a low shot to the net.

Such was the control and unity that Fergal Reel’s men possessed all over the field and as a collective, the current Joe Ward holders never once looked like being threatened in the semi-final.

Craig Lynch had little to do in the way of making a save and his kick outs contributed to Stephen Campbell getting a score along with five Sam Mulroy efforts. The Blues final quarter tilt never came, instead Ciaran Downey pegged back a couple of frees but it was the Jocks who marched on to the final.