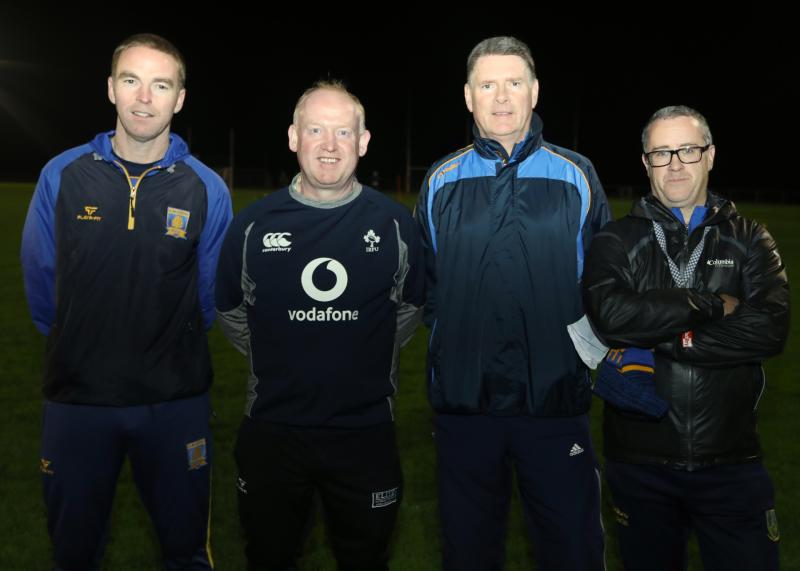 Armagh native Kieran Quinn looked a surprisingly relaxed figure as he readies his St Mochtas troops for another big training session ahead of their date with the Martin’s this Sunday in Ardee (Throw in 2:30PM).

Taking on the reigning county champions, a side that has pretty much steam rolled all in their path since landing the crown last year, he knows it is his biggest challenge to date.  Back to their favoured role as underdogs he is hopeful that they can rise to the challenge.

“That is something that will suit us, we won the Intermediate three years ago and were underdogs then, we’re up in Division One this year pushing teams and are underdogs during most games and that suits us down to the ground” he outlined.

“We are underdogs for a reason, the Martins are really good, we have seen how hard they work so that means we need to try and match them. If we do, we are in with a chance but in all reality that’s a big if.”

While his opponents are the overwhelming favourites, rightly so given the high scores and impressive defensive shape they have brought to the competition so far this year, The Louth Village men do come into the contest in the form of their lives.

They have had to work extremely hard to get where they are today, showing a never say die attitude to overcome setbacks versus St Pats, Mattock Rangers and of course St Marys. They are a team that is never beaten, and this is something Quinn hopes will stand to them in the final.

“There is good belief there in the camp among the guys, they are not panicking when they go behind. One thing about this group is that they are never beaten, they will fight to the end no matter what the score is.

“It has been like that since I joined up with this group four years ago and is one to the things I love about them. They’ll keep going and going, never giving up at any stage and hopefully that’s the way it will be come the final.”

Both sides have shown an ability to notch up a high score when required and with the sides boasting a talented and dangerous attack, many have speculated that the tie could end up being a very open high scoring contest.

That is not what the Armagh native is hoping for, yet he did admit they will be ready to offer it up, if it looks as though that style of game is their best chance of causing an upset.

“It is a hard job keeping the likes of Sam Mulroy and company quiet, I would love it if it was a four all game and we sneaked it at the end, I don’t want a sharp shooting contest.

“We’ll have to look at the videos of their semi-final and see if there are any cracks or anything we can do to win the game because that’s what it’s all about, winning the game.

"If it means we go after them and try and put up scores and leave ourselves vulnerable, then we’ll do that but it is all about trying to win the game and by the best means we can rather than worrying too much about the opposition.”