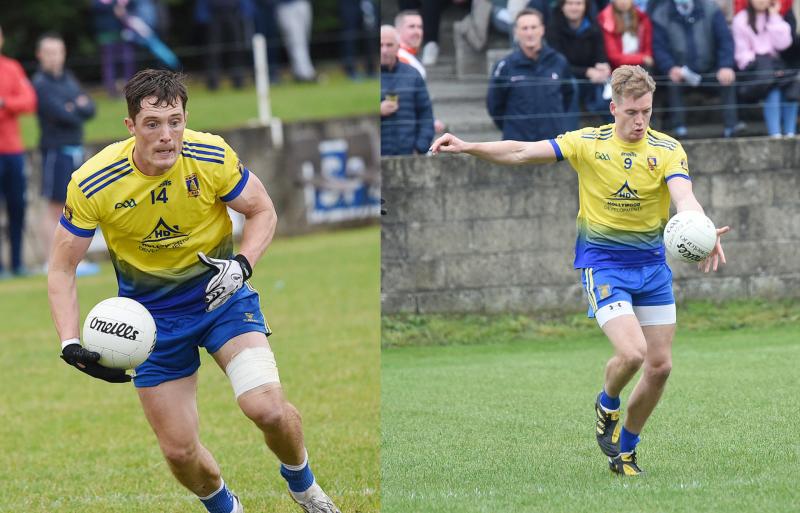 The Byrne Brothers, Declan (right) and Ciaran (left) are confident they can put it up to Naomh Mairtin in the county final. (Pictures: Arthur Kinahan)

It is easy to sense the excitement and anticipation that a first appearance in a county final brings as you make your way through the quaint country setting of Louth village. There is bunting everywhere, cars are painted in Blue and yellow. Sunday’s final is all people are talking about.

It is an historic day for all associated with the St Mochtas club, but despite the pressure that must be building as we creep closer to D-Day this Sunday in Ardee (Throw in 2:30PM), the Byrne Brothers, Declan and Ciaran, are itching to get a crack at the champions Naomh Mairtin.

“It is absolutely massive for this club, one of the main reasons I came home from Australia is to play for this club” stated the younger of the two brothers Ciaran who had a long stint with AFL side Carlton.

“I missed playing for six years, we are just a generation of Byrnes who have donned this Blue and Yellow jersey and I’ve got goosebumps just thinking about Sunday.  I cannot wait to represent the club; my family again and hopefully do our best in the final and try and get that historic win.”

That sentiment is backed up by the evergreen Declan, whose has been a longtime soldier of the Mochtas cause while also notching up over 100 appearances for the Wee County in an impressive career in the Louth jersey.

After so long fighting for days like this, the 31-year-old is just happy to be still involved and is confident they are helping pave the way for the future of the club he so cherishes.

“It means everything to the local community; it has been a long time coming and we have got a bunch of young lads now who are driving things on. I’m just hanging on myself at this stage and trying to lead them in the right direction” he admitted.

“We want this to be the start of things to come, make sure we leave this blue and yellow jersey in a better place and I think we are doing it justice at the minute but overall it is just another game and we want to get over the line. We are not coming out here just to make up the numbers.”

The Mochtas have had to earn their place in the final, with no easy games from start to finish. They lost on the opening day to a sucker punch late goal against local rival St Marys before then overcoming the significant challenges of St Patricks and Mattock Rangers.

Yet it was their upset semi-final victory that got people talking, as they showed grit and determination as they gained revenge on Ardee to book their place in the final. Having to get there the hard way is something Declan expects will help prepare them for the final.

“You can talk about being unfortunate in the first game against the Marys but it was probably inexperience and stupidity on our behalf as we should have never let them in for a goal at that late stage and we know that and have learnt from that.

“We had to dig deep against the Pats, we dug deep against Mattock when we were probably not playing at our best. We followed that up with the win against the Marys and it will stand us in good stead as at this stage we will be battle hardened and that can mean a lot going into the final.”

Both brothers have enjoyed their time in the trenches with the county panel this year working alongside Mickey Harte where they of course played with plenty of the men they will go into battle against in Ardee.

They know they will face a big test when tackling the current champions, but Ciaran is relishing the opportunity for St Mochtas to show what they can do and is hopeful they can bring their A game to Pairc Mhuire.

“We have played the Martins a few times at this stage and obviously you have the likes of Sam Mulroy and other county players like John Clutterbuck and Eoghan Callaghan, they are all top-class players who are starting for the county team just like Decie and myself.

“It is going to be a good battle, there have good players all-round, not just the county players as they have strong consistent club players too who can perform quite well. We are going to be up against it, but it is a battle we are really looking forward to and we are confident we can win.”

Their overall emotions heading into the biggest day in their club’s 87 year history is pride, as they have brought about a day many thought they’d never see come.

All they are worried about now is making sure they do the club and its many servants over the years justice, doing all in their power to bring the Joe Ward Cup to Louth Village for first time.

"That feeling after beating the Marys in the Semi-final was special and something I’ve never felt before and I’ve played in some big games throughout the years" recalled Ciaran.

“To see my Dad at the final whistle crying and in tears; he played football for this club for so many years, was captain in the past as well so to see the likes of him in tears and all the kids running around was special.

“Looking at the Village at the minute with cars painted yellow and blue, the flags being up everywhere, it is more than a football game, it means a lot to the community around this club and hopefully we can do them proud.”