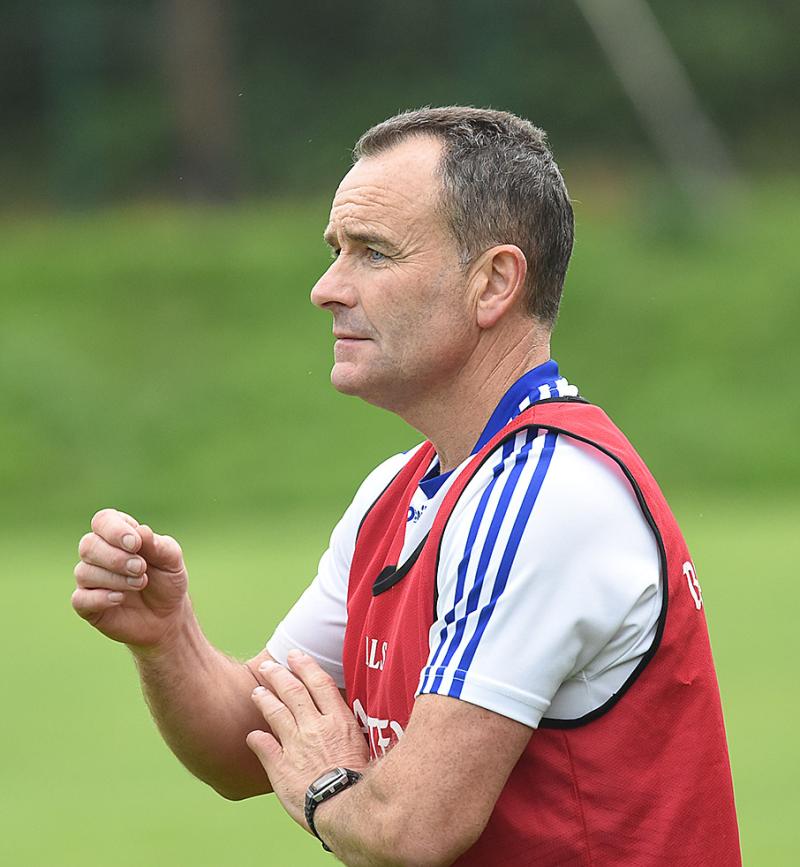 While fans of Naomh Mairtin were delirious to have finally got one over their biggest rivals in recent years, something which is worth celebrating given their high profiles defeats, their manager Fergal Reel saw the contest in a more pragmatic fashion. Just a win.

As he spoke to the Democrat in the lead up to Sunday’s final against St Mochtas, Reel spoke about how at the end of the day that win did nothing more than book their seat in Louth GAA’s showpiece event.

“You don’t get any more for it. You get a place in the final, you don’t get a two or three point start in the final on the back of it and the Mochtas will take fierce confidence too having beaten Ardee having lost to them in the group” stated Reel.

“Any day you beat the Blues, being the most decorated team in Louth football you take great confidence from it, but it wasn’t the competitive game we expected it to be and that is no disrespect to the Blues as we got off to such a good start that it probably killed the pace of the game.

“But we will take loads of confidence from it, you always do when you win notching up big scores, but then people will say you weren’t tested so there is negatives aspects to every game no matter what way you look at.”

The Silverbridge native was full of praise for his opponents St Mochtas, who he was happy to admit have had the much harder run to the final. After some tough contests he expects the Louth Village men to be extremely battle hardened and is expecting a titanic tussle when they do finally clash in Ardee.

“They’ve had a much tougher run to the final which is probably something that will stand to them on Sunday. They’ve beaten Ardee which is something we have failed to do this season. They have been a very tough to beat this year.

“They were in a tough group with Ardee and St Pats, who are in my opinion still a very good outfit and a real threat to anyone as one of the top teams in the county. They came out of that tough group, had another hard assignment against Mattock then defeated St Marys.

“It has been tough going and they are doing well, people talk about them being an experienced team but they are also very organised with good players and an impressive management team and set up, so they are a big threat.”

After impressively accounting for the Dreadnots, the Geraldines, St Josephs and the Blues so far this year, the Monasterboice men are firm favourites to retain the Joe Ward Cup.

The Armagh man said despite their levels of success recently and the way they have been coasting to victories, it is still extremely easy to get these lads motivated for more. He wanted to paint a picture of exactly how much work they do behind the scenes to get to where they are right now.

“People think this is a box ticking exercise but it certainly is not, people outside don’t have a realisation of the work that you don’t see on the field on matchday. We have 35 players here and we have to pick 30 to play an in-house game.

“Some players come in, some come out and the honesty and commitment to sit it out or come in and play a part in those games, they are pushing the JP Rooney’s and the Sam Mulroy’s up to the levels that they are currently achieving which is great.

While Reel knows that his players will be itching to add to their legacy with another title, he feels that legacy has very little bearing on their preparation. One win leads to a craving for two, a second sees calls for three.

He knows just one decision, one bit of bad luck can be a team’s downfall, not matter how high and mighty they might seem, but he will do all in his power to make sure they are prime and ready to deliver the second Senior title their fans and players crave so much.

“It is always about how it goes on the day, you can prepare all you want but you could lose a man god forbid to an injury, there is so many things that could happen and the lads know that.

“You don’t know what’s around the corner, so you can’t really be thinking about legacies, it is on the day, you prepare as well as you can and hope you get that bit of luck, but we’ll be ready to go on Sunday.”