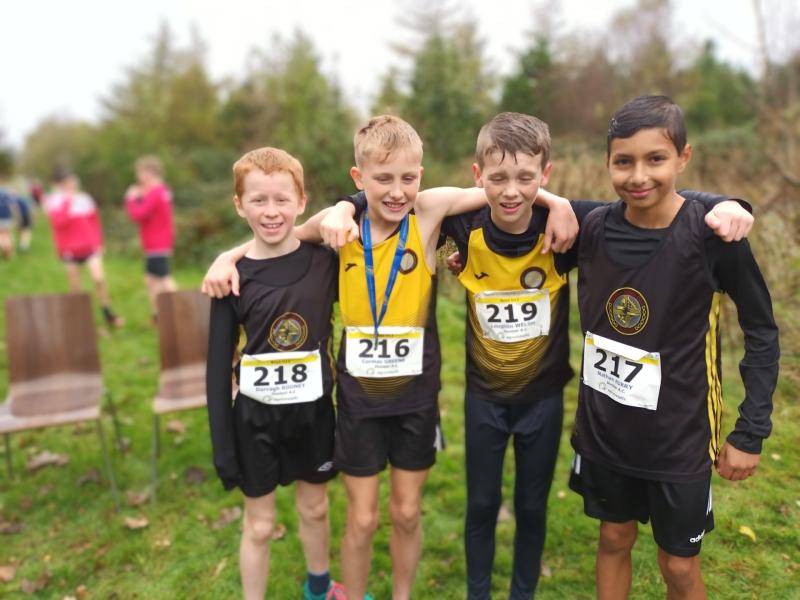 More runners registered to run than in previous years and this real event, as opposed to the many virtual lockdown events, was a pleasure to attend for athletes and supporters from all over the province.

Dunleer AC had a fantastic day and had a winner in the under 10 race in Fiannaith King, under 12 with Cliodhna Reilly and under 18 with Sean Connaughton, as well as other brilliant performances.

The first race of the day was indeed a non-championship under 10 event, hosted by the local Club St Senans and Dunleer's Fiannaith King did not disappoint.

This reigning under 9 and 10 Louth Champion ran easily over the undulating ground and produced a final sprint to edge past the two remaining runners in front to take the victory in fine style. Fiannaith was supported by her Club mate Maya Hurry who also ran very well over the difficult course.

Cliodhna Reilly, the current Louth Champion under 12, was the next to succeed for the Club, producing a confident, controlled run to take the lead with 300m to go and claim the Leinster Championship under 12 title for 2021.

She had a fine squad of Dunleer AC teammates behind her, with Grace McEvoy and Dearbhla Leavy both finishing in the top 12 and earning individual medals, while Aisling Finegan, Sadhbh Greene and Kelly Sheridan all finished in quick succession to ensure the club team gold went to Dunleer.

Cliodhna also led the County team to gold, with Dearbhla, Grace and Aisling all making the Louth squad that represented the Wee County so well in Kilkenny.

The boys under 12 event featured an incredible run from Cormac Greene, the Louth under 12 Champion, running the 2km cross country in seven minutes and seven seconds.

He finished in 2nd place in a field of 96 of the best under 12 runners in Leinster, claiming a well-deserved Leinster silver, while team-mate Darragh Rooney finished 28th, with Nathan Hurry in 41st and Loughlin Welsh 74th to produce a 7th place team finish.

Cormac, Darragh and Nathan were also on the Louth team which finished a fine 4th. The boys under 14 race produced another individual medalist for Dunleer AC with Dáire Mathews finishing in 6th place, supported by Evan Costello in 26th.

Both Dáire and Evan were on the Louth team and secured bronze medals with their county team. Megan McEvoy led the Dunleer AC girls under 14 team home in 24th place, supported by Sally Sheridan in 44th and Leah Rooney in 53rd.

Meanwhile at Under 16 level, the club had two girls participating with Lucy Sheridan doing very well on a long tough course to finish her 4km in 17.20 in 33rd and Erin Finegan close behind in 37th with a time of 17.34.

Matthew Fitzpatrick was the first Dunleer AC boy home in the boys under 16 4km Race with a nice time of 15 minutes to bag 21st place, with Sam O Neill in 43rd in 15.55.

The under 18 races produced top class runs for Sean Connaughton and Maebh Eakin with the boys U18 Leinster title going to Seán and Maebh securing bronze in the girls under 18.