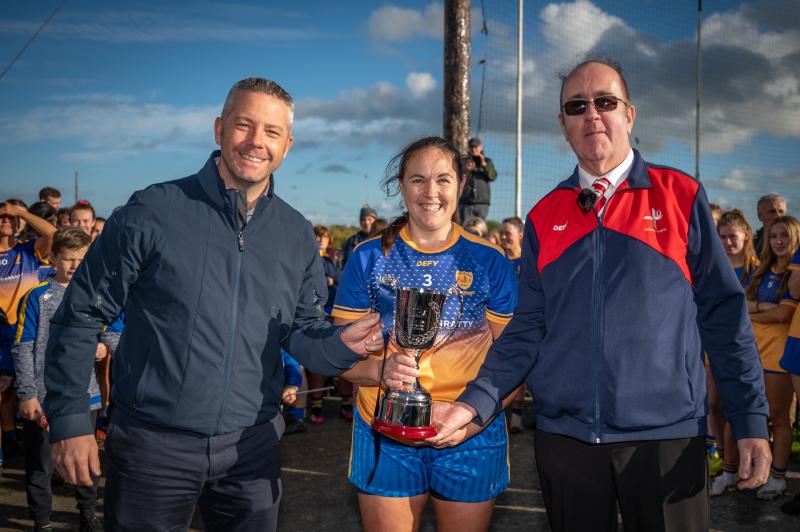 Following on from their Division Two triumph earlier in the year, Kilkerley Emmets will also dine at the Louth Senior Ladies top table for 2022 following this victory over a gallant Gleann Mhairtin side in the second of two finals in Tallanstown on Sunday afternoon.

Kilkerley have key attackers Ciara Lennon and Ciara Sharkey to thank for this success. The two inside forwards will undoubtedly take the plaudits having scored 3-11 of their 3-17 winning tally.

Eager to make the most of that first half wind advantage, Kilkerley came out of the traps and led by 0-8 to 1-1 by the first half water break.

Along with Ciara Lennon, their side featured fellow Louth minor panel members Ella McEnteggart and Enye Kampes. McEnteggart in particular merits huge praise kicking two points and touching the ball 24 times over the hour in a hugely influential performance.

Ella McEnteggart opened the scoring before further points from Ciara Sharkey and Lennon, along with Rachel McNally helped their side to a 0-4 to 0-1 lead after 8 minutes.

Further scores from McEnteggart, Sharkey and Lennon increased that lead, while Fiona O’Neill had to settle for a point after her shot was smartly tipped over the bar by Gleann Mhairtin keeper Rachel Goodwin for 0-8 to 0-1.

Despite being under the cosh, Gleann Mhairtin boasted superb attacking talent themselves in the form of Rachel Leonard. Named on the forty, Leonard played at the edge of the square due to Mary McKeever operating in the sweeper role.

Whenever Gleann Mhairtin kicked inside to Leonard it was red alert. Having earlier opened her side’s account, another delightful supply of ball into her saw Leonard lay the ball off to team captain Sarah Maguire who crashed the ball to the net to bring her side back into the contest at 0-8 to 1-1.

Kilkerley could not say they were not warned as Katie Murphy also came close to bagging a goal in the opening minute. Rebecca and Katie Carolan also continued to carry the fight to Kilkerley from defence.

Marcella Molloy and Rachel McNally traded scores, before a brace of scores for Glean Mhairtin including a stunning effort on the run from Katie Murphy kept just a kick of the ball between the sides at 0-10 to 1-4 approaching half time.

Leonard and Murphy continued to be a menace, and Rachel Leonard set up Katie Murphy to ensure that the gap stayed at three points at half time, with Jade McKeown and Ciara Sharkey after another excellent Goodwin save, raising white flags for Kilkerley.

Kilkerley would have felt that they should have been further ahead, but between missed goal chances and wides, along with the treat of Gleann Mhairtin’s Leonard and Murphy meant that the tie was intriguingly balanced at the break.

However, they stepped things up and outscored their opponents by 3-2 to 0-2 to all but seal their IFC victory as they led by 3-13 to 1-7 by the second half water break. Ciara Sharkey managed to get a flick to the ball before Gleann Maritin’s Rachel Goodwin to give them that six-point lead two minutes after the restart.

Further scores from herself and Ciara Lennon, before Sharkey grabbed her second goal in as many minutes established Kilkerley’s dominance on the score board, with midfielder Rachel McNally accruing 31 possessions over the hour.

Moments after Sharkey’s second major, Ciara Lennon’s shot dribbled over the line for her side’s third goal to all but seal their victory. Rachel Leonard frees and a wonderful score from Mari Clair Fahy kept the scoreline ticking, but there was no doubt about the winners as Kilkerley Emmets sealed a league and championship double.