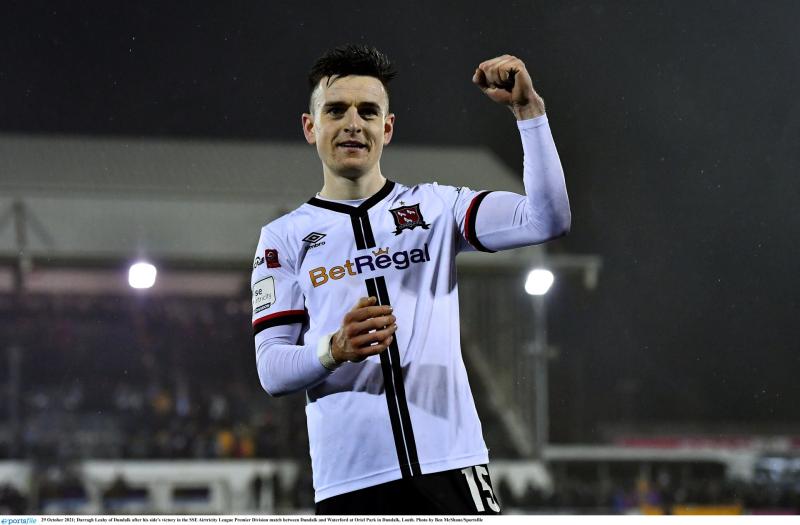 In the midst of growing uncertainty regarding the future of the club, Daniel Kelly’s goal on the stroke of half-time proved to be decisive as The Lilywhites recorded a crucial win.

The result pulled Dundalk four points clear of Finn Harps, who currently occupy the relegation play-off position, and three above Waterford, who remain in eighth place.

The first attempt of the night fell to Dundalk, with Kelly volleying off target after six minutes of play, while at the other end, Junior Quitirna dragged a shot well wide.

Michael Duffy went close for The Lilywhites on 12 minutes when he cut inside John Martin before curling a delightful shot which veered inches wide of Paul Martin’s post.

Junior floated another attempt for Waterford over the top shortly before Sean Murray went close for Dundalk following a mix-up between Kyle Ferguson and Paul Martin.

Vinny Perth’s side had a penalty appeal waved away on 17 minutes when Kelly collided with goalkeeper Paul Martin after getting on the end of a Daniel Cleary ball over the top.

Greg Sloggett headed over from Murray’s corner moments before Jack Stafford fizzed a shot just over in what was arguably Waterford’s most notable effort of the opening half.

Dundalk should have gone ahead on 38 minutes when Duffy broke down the right before switching it to Kelly, who blazed over from close-range when it looked easier to score.

However, Kelly did manage to get himself on the scoresheet in first-half stoppage-time when after Murray’s neat ball over the top, he slotted past the advancing Paul Martin.

Patrick Hoban could and probably should have made it 2-0 right before the break, but he fired just over as the hosts – backed by a vociferous support – finished the half strongly.

After being slipped in by Will Patching’s incisive pass, Hoban looked destined to score four minutes after the restart, but was brilliantly kept out by the feet of Paul Martin.

The Waterford stopper – playing in the absence of veteran Brian Murphy – denied Dundalk’s top goalscorer again with his feet after he headed from a Murray corner.

At the other end, Marc Bircham’s side reminded Dundalk that they were still in the contest, as Anthony Wordsworth dragged a low shot wide of Peter Cherrie’s post.

Paul Martin produced a double-save to deny The Lilywhites a second on 61 minutes – first from Duffy’s volley before making himself big to foil Hoban once more.

Dundalk deputy Cherrie produced a remarkable point-blank save on 72 minutes to prevent Junior, who was played through on goal by Wordsworth, from equalising.

Sami Ben Amar was summoned from the substitutes bench and almost sealed the win for Dundalk with less than ten minutes remaining, as he dinked an attempt inches over.

In the pouring rain of Oriel, the ball broke kindly in the penalty box for Murray, but yet again, the superb Paul Martin was on hand to save and keep his team in the contest. However, Dundalk weathered four minutes of stoppage-time to hold out for the win.