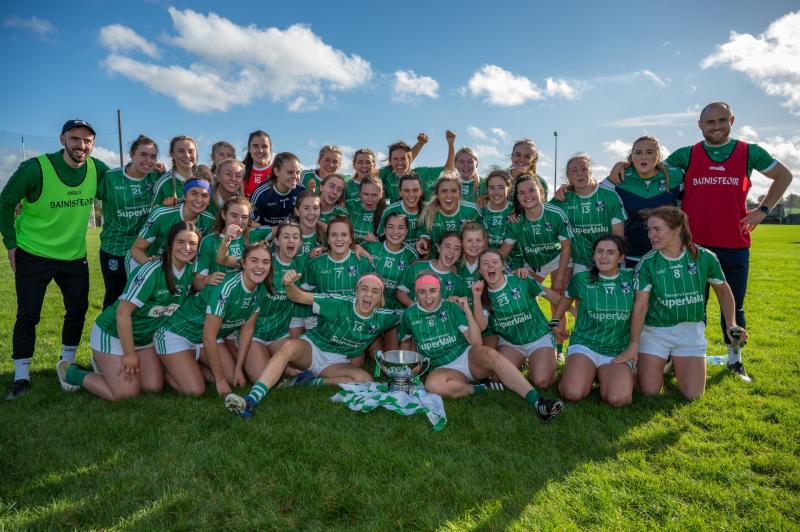 The Geraldines team celebrate with the cup which they have now won three years in a row. (Pic: Warren Matthews)

It takes a certain type of team to win three championships in a row. Things like game management and that ability to get your noses over the line come to mind and the Geraldines have those things in abundance.

The first of two finals in Tallanstown on Sunday may not have been pretty, with a swirling breeze making it difficult for either side to produce meaningful quality in the final and scores were at a premium.

With both sides level on turnovers (28 each over the hour) and both equally wasteful in front of the posts, scores were like gold dust as they battled and scrapped hard throughout.

Geraldines’ Emma Gartlan made clever use of the breeze to guide the ball over the bar with the outside of her boot inside two minutes.

Full forward Abbie O’Connor whose tussle with Fechins full back Rachel Beirth was a joy to watch, laid it off to Gartlan who fed fellow wing forward Zoe McGahan to kick her side’s second score of the contest on 11 minutes.

The Fechins finally got off the mark on 12 minutes through an Ava Briscoe free. Having kicked four into the keeper’s hands in that opening quarter, the Girls from Termonfeckin finally levelled through the energetic Roisin Kavannagh to leave it 0-2 each after 18 minutes.

The Geraldines, with Rebecca Carr operating in that role of third midfielder, managed to get their noses ahead with a free from Carr, an exceptional effort from Sandra Neary and Carr again giving them a 0-5 to 0-2 lead as both sides were guilty of some wasteful play in attack.

The Fechins were struggling to judge that awkward breeze at the Tallanstown club house goals, kicking five wides and five into the keeper’s hands.

You felt that in this game, a goal would feel like a six pointer, and the Fechins almost got off to the perfect start after half time when Hazel Haughney set Rachel Kinch baring down on goal, but her effort was expertly saved by the feet of Gers keeper Grainne Boyle.

It was a real what if moment for the Fechins as Boyle denied Kinch who had previously bagged goals in the quarter final and semi-final for the Hoops. A big moment in the game.

Following that the Geraldines extended their lead through a Rebecca Carr free, before the impressive Sandra Neary set up Emma Gartlan to make it 0-7 to 0-2 in the Haggardstown side’s favour after 39 minutes, with the Fechins having to play that early second half with 14 players, following Sarah Moore’s sin bin just before the break.

Sandra Neary’s influence on proceedings cannot be understated for the Geraldines, as she finished with an incredible 38 possessions in this final as the Gers tried to keep possession and manage the game.

While elsewhere Rebecca Carr’s three points and 32 possessions in that deep lying third midfield role, ultimately earned her the player of the match award.

Once again, both sides continued to find scores hard to come by as the next score would not arrive for another 11 minutes following Gartlan’s point. This score proved the key score as Zoe McGahon fizzed a shot to the top corner in a move involving Gartlan and sub, Victoria Fee.

This gave the Geraldines that commanding seven-point lead heading into the final 10 minutes at 1-7 to 0-2.  Despite being left frustrated from many attacks, the Fechins refused to throw in the towel.

Ceire Nolan kicked one over the bar following a long, lung busting run, one of many made by the county half back to end her side’s wait for a score in the second half. That was quickly followed by a well taken point from Sara Moore and a lovely, clipped effort from Ava Briscoe.

However, it was too little too late as the Geraldines held onto the ball and ultimately held onto their title to lift the Louth Senior Ladies championship for the third year in a row as their dominance continues.