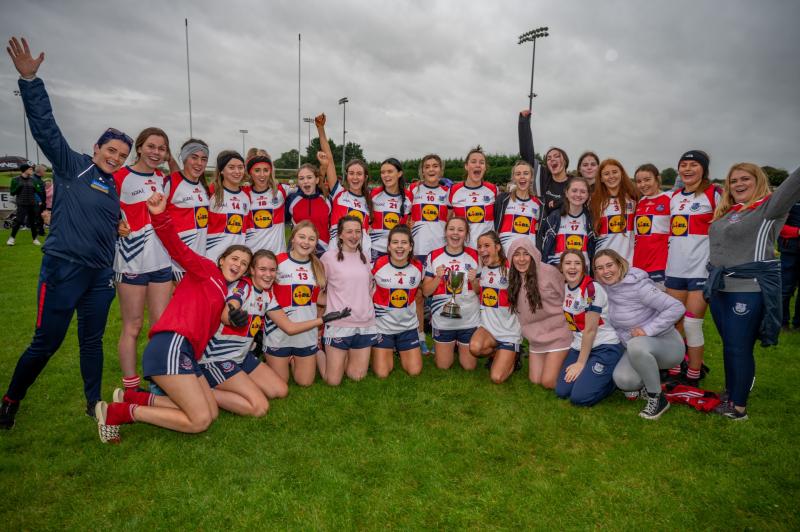 Hunterstown Rovers became the first county championship winners in the Louth LGFA 2021 season after steamrolling their way to the Louth Junior Championship with this emphatic victory over Dundalk Gaels in Haggardstown.

This was the first of five finals played as part of a bumper weekend in both ladies and men’s GAA in the county. The first half saw a Hunterstown side stamp their authority early on, not letting Dundalk Gaels breath, winning 18 of 24 Dundalk Gaels first half kick outs.

Abbie Sheridan, Ruth McElroy and Anna Hickey were first to pretty much every ball, as the kickouts hung in the air due to a tumultuous wind. Hunterstown Rovers had 52 shots at the posts over the hour.

With the first of her 28 touches of the ball in the final, Abbie Sheridan stormed through to set up Mishcha Rooney for her side’s first major of the match.

Ciara Martin (0-3), Theresa Russell (0-2) and Sheridan found the range in wave after wave of Hunterstown attacks as they led by 1-6 to no score by the first half water break. Hunterstown were making very good use of the wind advantage, as they continued to play the ball through the hands.

Credit to Gaels keeper Mulpeter, as she produced an excellent save from a Rooney penalty moments later in one of many saves the custodian made over the hour.

A further goal from Aoibheann Carolan and scores from the likes of Ciara Martin, Órlaith Carolan and the excellent Mishcha Rooney saw Rovers lead by 4-11 to no score at half time.

Second half sub, Emma Gillespie added to an ever-growing lead for Hunterstown with a point, while an Aine Fannin goal meant that all six of the starting Rovers forwards had added their names to that scoresheet.

However, give credit to the Dundalk Gaels who showed the spirit and determination that saw them edge out Dundalk Young Islanders in the semi-final.

Lively full forward Sarah McAleer ghosted in behind the Hunterstown Rovers defence to calmly finish to the net to get the Dundalk side off the mark on the scoreboard, a score which was met with arguably the greatest cheer of the day.

The hardworking Caoimhe Crichton broke lines to drive the ball to the net for the Gaels’ second goal which was again met with another raucous cheer for a vociferously supported Dundalk Gaels.

Gaels captain Ruth Burlingham also deserves a mention for her constant covering of the wide Haggardstown turf, while Sarah Harlin, Laura Connolly and Sadhbh Lambert can hold their heads particularly high as the Gaels’ backs were very much to the wall in this final.

But despite seeing Amber Quaile sent off in the second half, there can be no doubts about the deserving winners here as Mishcha Rooney sealed her hat trick just before the end as Hunterstown Rovers ran out deserving winners of this Junior Football Championship.