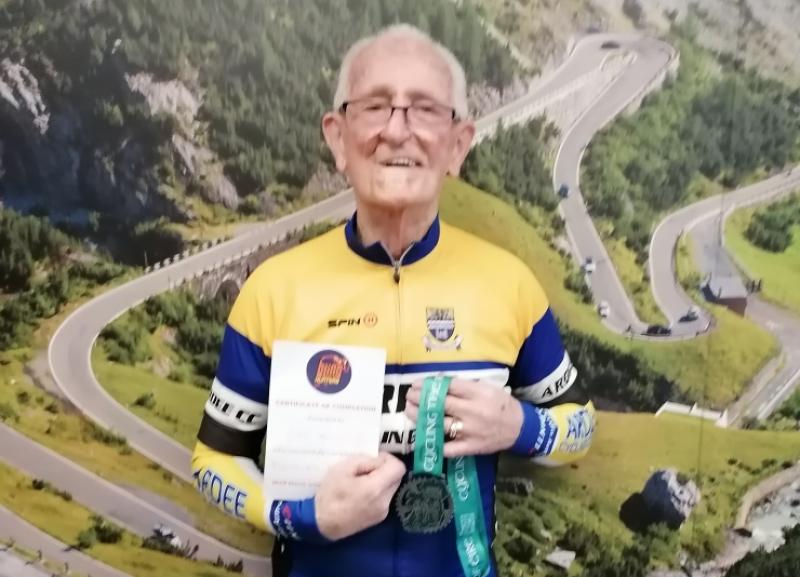 An 80-year-old cyclist in Ardee has been lauded for his completion of the Ring of Eire, a cycle equivalent to 3,171 kilometres, since starting the challenge earlier this year.

Jim Gavin of Ardee Cycle Club cycled the distance from February this year, having been entered into the challenge by a friend of his unbeknownst to him.

“I knew nothing about it until I got this beautiful presentation,” said Jim, speaking to the Democrat.

“It’s the equivalent of doing the circle of Ireland.”

The presentation itself was a surprise to Jim, with him getting dressed up in his cycling gear to head out on a bucket collection, but was shocked to discover that he was receiving an award.

“We were supposed to do a bucket collection and of course that was all a fix,” said Jim.

“I was all dressed up when I went in to do this bucket thing, but that’s when they gave me the presentation.

“You wouldn’t know what they’re up to.”

Jim said that he never expected to receive an award for his cycling, saying that he just loves to do it.

Jim’s friend, Linda Fagan, originally signed him up for the award without his knowledge and kept a record of all his cycles throughout the year.

As to his achievement, Jim said it was no big deal to him and that he just heads out and does his cycling week after week.

“When you’re used to getting out and doing 50, 60 or 100km every couple of weeks, that’s no great feat because I enjoy doing it,” said Jim.

“I think 80 now, to me and you hear it often enough yourself, its only a number to me.”

Jim originally became a member of Ardee Cycling Club seven years ago, after returning home from Spain after 12 years abroad.

Jim was not always a cyclist, saying that he originally got his start as a runner, running in several marathons and other road races while living in Spain.

“When I came home I took up the cycling.”

He was full of praise for Ardee Cycling Club, saying that they have great members who are always up for a chat.