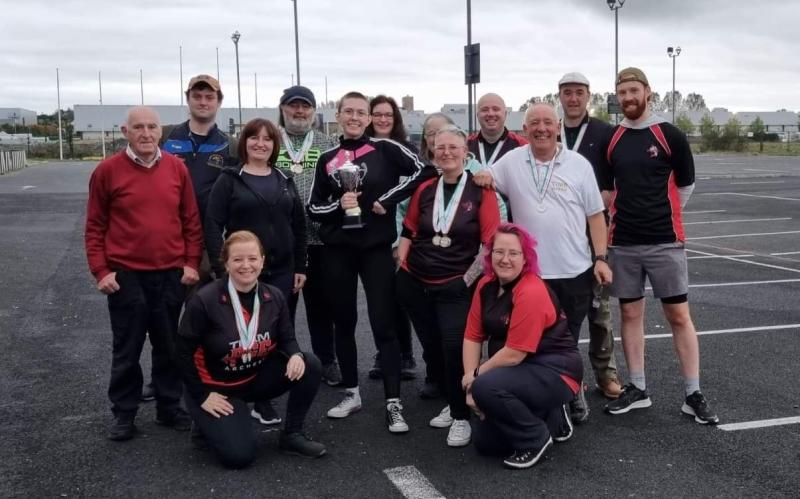 The Irish National Indoor Championships, co-hosted by DKIT and Cuchulainn Archers was the first, much awaited, indoor shoot held since March 2020.

Archers came from all over Ireland to take part in this huge event, held in the spacious DKIT Sports arena, to compete for the much-coveted title of being the National Champion.

“I think that Covid has really hit our sport with many archers not able to practice indoors due to clubs being closed down since the start of the first lockdown” stated Eamonn Rogers, Chairman of Cuchulainn Archers.  “

“That being said, a lot of hard work has obviously continued as we saw at least 4 new Irish records set over the weekend.”

Cora along with fellow DKIT student Magda (Roo) Krock, both recently signed to Cuchulainn from DKIT, enabling them to shoot at the Nationals, with Roo finally taking the Gold Place to Cora's  Silver in what was their first competition after a short time in the sport.

Ann Marie (Smiler) Murray took Gold in Masters Barebow followed this up by grabbing a Bronze medal in the Senior Category. In the Individual Senior Categories, Eamonn Rogers took Bronze in the Male Compound while Shona Judge placed Bronze in Female Compound.

All told a terrific collection of medals to a squad who also had to work on the day setting up, taking down and running the event alongside the DKIT Archery team.

The DKIT students got a great feel for the day and learned much about the set up and running of a National Competition.

Many said it changed their view on archery simply by feeling the need to get involved and share in the remarkable camaraderie that Archers enjoy compared to many other sports, as well as learning to be in competitive archery as opposed to just simply learning a new sport.

Many thanks also to CuCu member Fiachra Judge of "Time Judge"(a wireless timing system) who sponsored the event and to daughter Shona for the excellent photos taken on the day.

Both Cuchulainn Archers and DKIT Archers look forward to working together again next Month as they co-host the Irish Indoor Open, no doubt it will be another well organised and winning event.