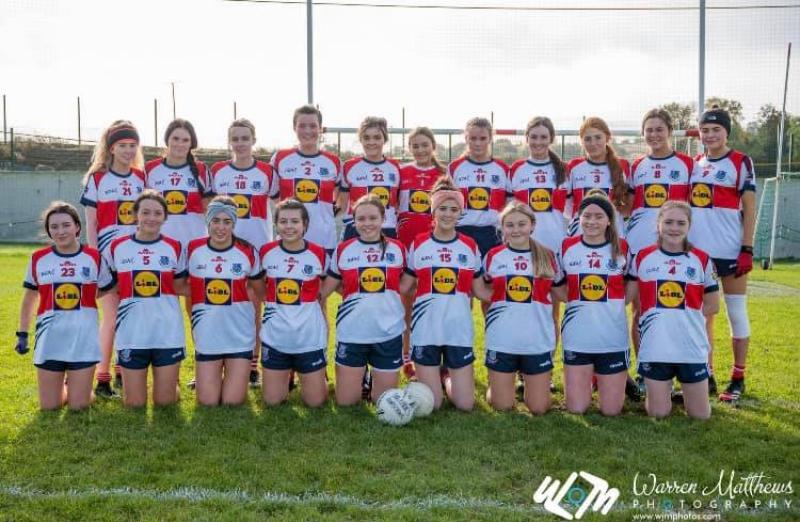 The Hunterstown team before their battle with Cuchulainn Gaels. (Credit: Warren Matthews)

On a bright sunny Sunday morning, Hunterstown Ladies took to the field in the Junior Football Championship against Cuchulainn Gaels. The game was a battle throughout with some great play from both teams.

Mischa Rooney got her name on the score sheet early with a great pass into space which resulted in a goal within in the opening minutes. The home team put pressure on from the start with Aoibheann Carolan winning a high ball on the wing and converting it with ease.

Cuchulainn Gaels didn’t let up with strong pressure coming from their back line, however it was a fight in the middle. Ava McNally worked well, picking out Orlaith Carolan with a well executed play into space that gave Carolan the chance to slip her strike over the keepers fingertips and into the net.

The Gaels were quick to move the ball along the wings and when presented with the chance got two points on the board in quick succession. Dearbhla Rock was outstanding in goals again with several great saves throughout the game.

Rock was quick to clear the ball off the line after a goal chance from the Gaels just before water break. Anna Hickey left the 13-yard line and worked the ball through the middle to find Ciara Martin. With a lovely left foot, Martin brought the score to 3-5 to 0-2 in favour of the Rovers at the first water break.

The Gaels came back strong in the second quarter with great skills on display in their forward line and the Huntertown backs had to put their bodies on the line. Ruth Gillespe and Laura Halpenny were a strong combination to challenge the forwards.

Rock once again had to face down the challenge of a penalty kick however this doesn’t appear to faze her and was she was ready for it. Unfortunately for the Gaels this shot went wide. With half time approaching Kerris McCabe and Mia McCartney were vital in linking some excellent scores again from the very capable forward line.

Emma Gillespe was in the right place at the right time to pop a quick pass and assist Aine Fannin in getting her name on the score board with a lovely shot right in front of the goals just before the half time whistle. At the break it was 5-10 to 0-3 to Hunterstown.

The second have kicked off strong for the Gaels with two goals in the 3rd quarter. Ruth McElroy was fighting hard in the middle of the field and worked well to link up with Theresa Russell in the corner, however with a bit of a fumble in defence the Gaels conceded a penalty which Rooney had no problem converting.

With a quick kick out and fast hands through the Gaels midfield, Samantha McCarren had to put her body on the line in the second half with some big blocks stopping the Gaels from finding the back of the net.

The Gaels began to find their scoring boots, getting three more points, however Ella Duff Fedigan was there to clear several shots with one of those attempts coming from Jennifer Trainor. Trainor played well throughout when running up the wing and found Erica Sheridan who made a quick play to Martin at the far post but unfortunately it was a square ball.

The Home team finished strong with a final Score of 6-12 to 2-06. Hunterstown Ladies go on to face Dundalk Gaels in the Junior Championship Final in two weeks time.