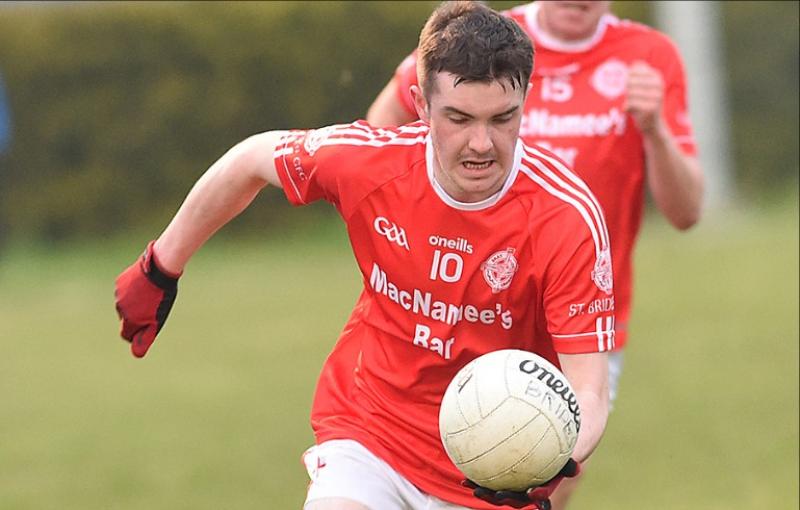 Survival was the aim for both sides in Stabannon on a wet Sunday night as the St Brides overcame O’Connell’s in the last senior group game of the weekend in Group C.

Despite a place in the quarter finals at stake, last year's intermediate champions were relieved to consolidate their status firstly and then look ahead to a quarter final draw against Ardee later.

For the O’Connell’s, the great survivors, they were looking to respond from a heavy opening day defeat to Mattock Rangers. Former Louth manager Wayne Kierans and former player Shane Bannon were drafted in to help out preparations.

The weather conditions didn’t soothe the tension as the rain teemed down on both sets of nervy players all night. The Castlebellingham outfit began the game in commanding fashion, outscoring their opponents 0-4 to 0-1. Cian O’Dwyer, Jack Sadlier, Jackie Agnew and Andrew Keenan all finding the target in a terrific start.

Deja vu was a feeling that swept over Knockbridge supporters as similar to last week at the same venue, they missed frees, gilt edged chances and conceded scores at the back.

Emmet Kirk started the game this weekend and after 12 minutes on the clock he opened his side's account. Then on the stroke of the first half water break Paddy Reilly buried a penalty past Stuart Reynolds, who did get a hand to it.

With that, St Brides took the lead and they would never go behind again in the contest. Kirk landed another free before Jackie Agnew defiantly found the target twice with his weaker left foot to level it at 1-3 to 0-6.

Brides rattled off the last five points of the half, Kirk and Reilly adding to their tallies along with the excellent Bernard Laverty, the midfielder giving a tour de force all night in mid Louth. Half time and the scoreline read 1-8 to 0-6 in the way of Declan McCoy's charges.

With tired legs, the second half became a dour affair with the O’Connell’s only finding the target once in the final quarter from Agnew. Laverty continued to impress however and his side coasted home.

Neil Thornton found the target from the bench and also forced Reynolds into a tremendous stop but Laverty would coolly finish the game out with a wonderfully struck 45’. Their reward is a quarter final pairing with Ardee St Marys next Sunday in Stabannon.