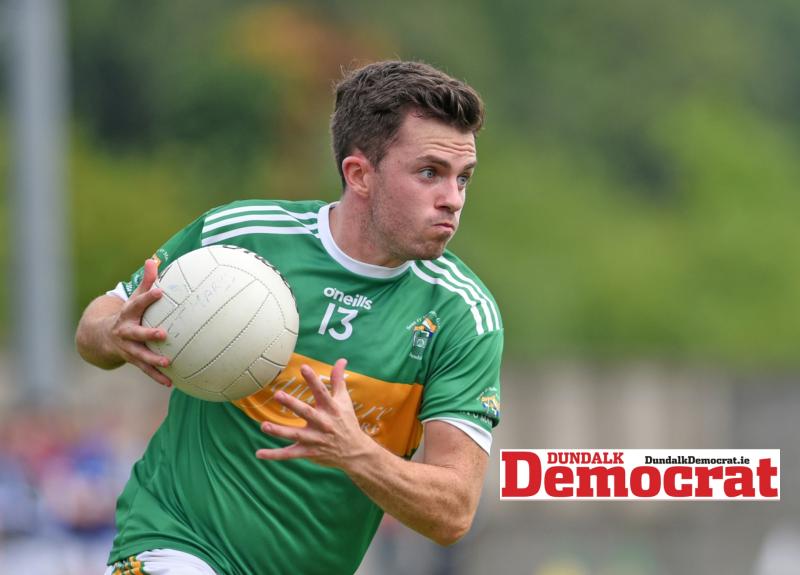 Sean O’Mahonys became the final team to book their place in the Intermediate Quarter finals as they overcame Roche Emmets in a scrappy Group A encounter under the lights in Haggardstown.

Despite showing more of a threat up front, the Point Road men were never able to shake off the challenge from Roche but two late goals from Terry Kelly and Stephen Kilcoyne put the tie beyond doubt in the final 10 minutes.

Despite mostly being a low scoring affair, the opening quarter was an evenly contested period that saw the sides trade scores, a brace from Barry O’Hare cancelled out by efforts from Stephen Kilcoyne (2) and Conor Finnegan as the Seans lead by 0-3 to 0-2 after 18 minutes.

It was a game just for the purists with scores and even chances at a minimum, but under the lights Conor Martin was rare a highlight for the Dundalk side. He was everywhere in the first half, winning breaking ball in midfield while also doing all he could up front to create opportunities for his side.

They were creating plenty of scoring chances but not taking them, with four wides and three shots dropped short in the first half alone. Yet it was even grimmer for the men in Blue.

While very slick on the ball and showing a great ability to pass the ball around their own half along with utilising the pace of runners such as Caoimhin Reilly and Sean Dawe, the problem was in their final ball. When getting into the opposition half they seemed to run out of ideas fast.

O’Hare did end a 20 minute barren spell for his side and he bagged his sides only point from play in the first period just before half time, enough to keep them within touching distance of O’Mahony’s as efforts from Kilcoyne (2), Finnegan and Stephen Fisher had them 0-7 to 0-4 up at half time.

It was Roche who got the first score once more through a fine point from Shane Byrne, but again despite plenty of hard work and graft they continued to lack a final ball and went another 10 minutes without a score.

The Seans continued to slowly build up a cushion over their opponents, two more well worked scores from Finnegan and Kilcoyne seeing them lead by 0-9 to 0-5 at the final water break.

They were cancelled out by two points from Roche before the game was ultimately put to bed with two goals on 51 minutes and 59 respectively.

Kilcoyne soloed down the field at pace off a Roche turnover, showing great patience and finesse on the ball as he beat two defenders before blasting the ball home past Jamie O’Hare.

The second was got by Terry Kelly, a 45 attempt from Finnegan dropped short and after some pinballing around the square it fell to Kelly who took no prisoners from short range to seal an eight point win in the end.

They will need much more this weekend if they are to progress to the Semi-Finals when they face Kilkerley Emmets in Clan Na Gael on Saturday.