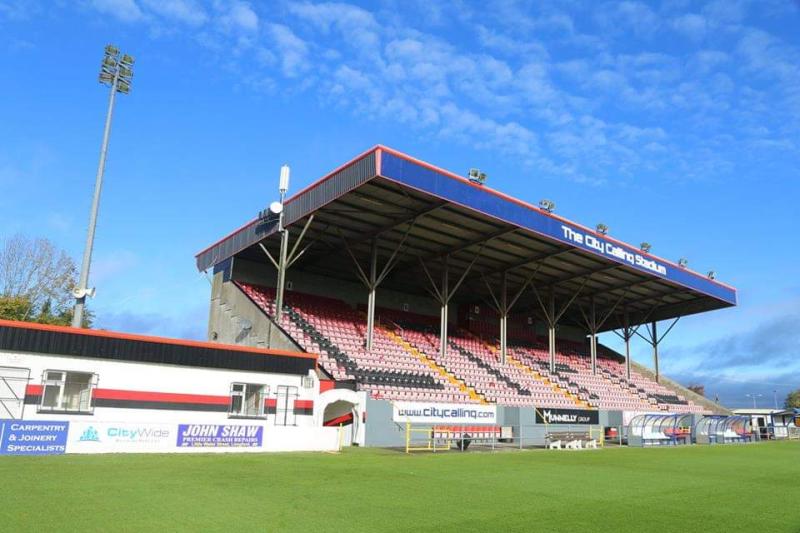 Bishopsgate, the venue for Dundalk's game against Longford Town

Dundalk will be looking to extend their long, unbeaten record against Longford Town when they travel to Bishopsgate in the SSE Airtricity League Premier Division on Saturday night.

The Lilywhites have not been beaten in a competitive fixture by the Midlanders since October 2nd, 2008 when goals from Darren McKenna and Alan Lynch put Longford 2-0 up at Oriel Park before Simon Kelly pulled one back for Dundalk late on. John Gill’s side recovered from the setback to go on and clinch promotion to the top-flight at the end of the campaign.

A familiar face was in the opposition dugout that night. After taking over the reins from Aaron Callaghan on a caretaker basis four weeks earlier, current Dundalk head coach Vinny Perth was in charge of Longford Town at the ripe old age of just 32.

Perth was also heavily involved on the only occasion that Dundalk have tasted defeat in the midlands town. The date was Saturday, October 30th, 1999 - during Dundalk’s maiden season in the First Division - when Longford Town, managed by a youthful Stephen Kenny, recorded a 1-0 win at Strokestown Road.

Terry Eviston’s Dundalk were looking to win their seventh game on the spin but they were undone by a Longford team - that featured Perth in midfield - when a 30-yard screamer from Wesley Byrne left John Connolly with no chance. It was Longford’s third 1-0 win of the campaign over Dundalk following victories at Oriel Park in the league and League Cup.

This is the third time the sides have met this season with both of the previous encounters ending all square. Goals from departed duo Junior Ogedi-Uzokwe and Chris Shields salvaged the Lilywhites a draw at Bishopsgate in May after Longford Town raced into an early two-goal lead.

Dundalk also came from behind in the return game at Oriel Park in June with Shields’ goal cancelling out Aaron McNally’s opener. Patrick Hoban also missed a penalty in what proved to be Perth’s first game back in charge of Dundalk after a 10-month absence.

Both sides go into the game in dire need of three points. Dundalk have won just one of their last seven fixtures, the FAI Cup win over St Mochta’s two weeks ago, while Daire Doyle’s side have just a solitary league win to date, a 2-0 victory at home to Derry City in March.

Wilfried Zahibo, Patrick McEleney, David McMillan, Brian Gartland and Darragh Leahy all miss out with injuries. Michael Duffy is doubtful but Raivis Jurkovskis and Sonni Nattestad are back after missing the 1-1 draw with Waterford due to international duty.

“It’s difficult for clubs like Longford because of the way the full-time element has come in at clubs in the Premier Division but Bishopsgate is a great venue, a brilliant ground, and I’m looking forward to going back there" stated Vinny Perth on the club's website.

“The mood is really good around the training ground, probably as well as it's been since I come back, and we want that to play out on the pitch.”

Kick off at Bishopsgate is 7:30pm with Dundalk fans given an allocation of 250 tickets, which must be purchased online at https://ltfc.ie/awaytickets/ ahead of kick off as they will not be available at the gate. The game will also be streamed via LOITV with games passes costing €5.