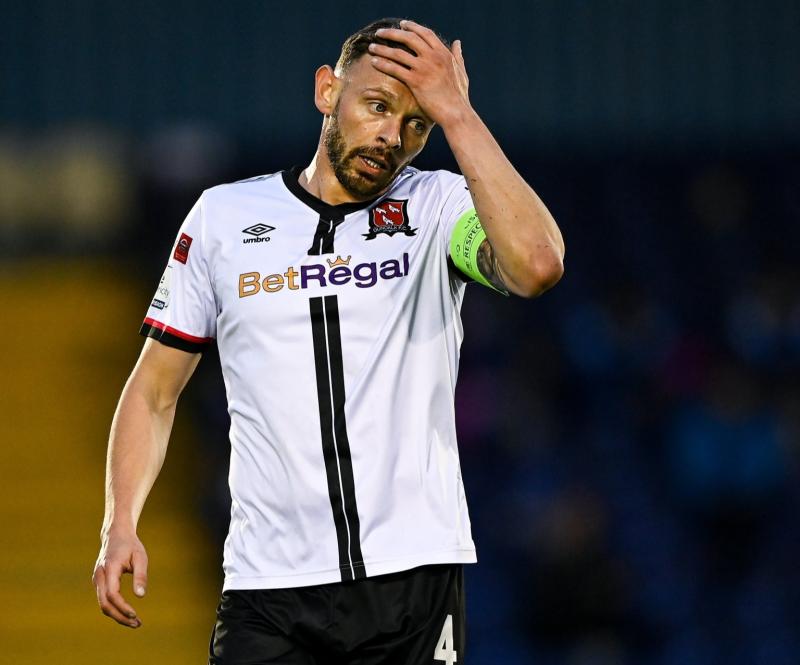 Dundalk FC’s winless run in the SSE Airtricity League continued last Friday night against fellow strugglers Waterford, who held The Lilywhites to a 1-1 draw at the RSC.

Vinny Perth’s side haven’t picked up three points in the league since July, but things were looking good when Sean Murray put them in front after only five minutes of play.

Just four clean sheets from their previous 23 fixtures suggested a second goal would be required if Dundalk were to secure an eighth win, but such comfort never materialised.

Instead, it was the in-form Waterford that levelled with 13 minutes remaining through English midfielder Anthony Wordsworth, whose header rescued a point for The Blues.

The result kept a severely depleted Dundalk in ninth-place with just 12 fixtures remaining – the first of which is a must-win at Longford Town this coming Saturday.

“We are disappointed,” said Dundalk head coach Perth afterwards. “At the same time, it was such a difficult situation for us tonight in terms of bodies and availability of players and injured players actually starting the game.

“I’m gutted for the players. They’ve put in a huge shift tonight. In a game like that, with a half-an-hour to go, 20 minutes to go, you need to freshen up the team. We had four young lads on the bench tonight and it was just probably too big an occasion for them.”

Despite missing eight first-team players, Dundalk went ahead after just five minutes at the RSC when Daniel Kelly weaved some magic down the right before his innocuous cross wasn’t dealt with by the Waterford defence, allowing Murray to finish with ease.

Dundalk were by far the better team in the first half and could have gone further ahead moments later when Will Patching’s cross was headed over the top by Sami Ben Amar.

Jack Stafford’s scuffed attempt was the best Waterford conjured up in the opening half, as Dundalk sought to take full advantage of their dominance and increase their lead.

Sam Stanton’s rasping shot from distance stung the hands of veteran goalkeeper Brian Murphy before – from a Stanton throw-in – Patching volleyed an attempt off target.

The second half was more of an even affair, but Dundalk continued to press, with Kelly’s snapshot veering wide of the mark, and Perth was made to rue those missed chances.

“When things aren’t going your way, they’re not going your way and that’s just the way it is. We accept that it’s difficult to take tonight, but I’m actually so proud of the performance because Sean Murray at half-time on a normal game would have come off. He had a really bad kick into his calf.

“Pat Hoban on a normal game wouldn’t start tonight. He’s been in trouble and he’s put in a heroic performance for the team. He’s really struggling with an ankle injury and we’ve no other fit striker. It’s just bizarre that we’ve nine first-team players not able to train this week.”

Waterford’s first big opportunity came on 54 minutes when Jeremie Milambo’s cross was unconvincingly punched clear by Alessio Abibi and into the path of Phoenix Patterson, who steered his attempt inches wide of the post in what was a real let-off for the visitors.

At the other end, Murray had a dangerous-looking shot deflected off target by Milambo.

Seconds after John Martin’s looping header was easily caught by Abibi, Dundalk should have made the points safe when Ben Amar headed straight at Murphy from Kelly’s cross.

That proved costly, as Waterford found their leveller on 77 minutes when Shane Griffin planted a ball into the box which was headed beyond a static Abibi by Wordsworth.

“They’ve brought on four or five players over 6ft,” said Perth. “That’s difficult and they launched balls into our box. It’s very hard to know if we could have defended it better.

“They had so many big players and it’s going to be difficult down here for most teams if they’re still in the game late on. We probably should have went 2-0 up. We had a couple of good chances.”

Things could have been even worse for Dundalk, though, as Griffin flashed a free-kick inches wide with ten remaining, but the contest was to ultimately finish all square.