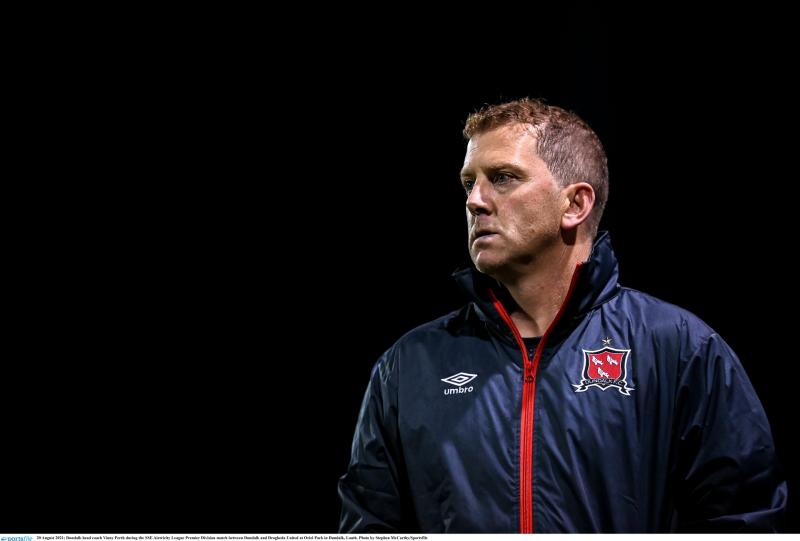 The FAI Intermediate Cup holders are currently top of the Leinster Senior League and knocked out fellow non-league sides Cockhill Celtic and Crumlin United en route to the last 16 of this year’s FAI Cup, where they will face the might of 12-time winners Dundalk.

Two ex-Lilywhites are in the St Mochta’s panel – Cathal O’Connor, who played alongside Perth for Dundalk in 2007, and Michael Daly, who spent the 2009 season at Oriel.

“If you know this non-league team, they’re as good as any First Division team,” warned Perth. “When you see the names on their team sheet and you see what they have about them, you’ll be quite surprised. They would be one of the better First Division teams if they were in the league, so in one sense, you’d probably rather play Rovers next Friday.”

After slipping to ninth in the SSE Airtricity League table last week, winning the FAI Cup represents Dundalk’s best chance of returning to the European stage next season.

However, Perth says returning to Europe isn’t a necessity for the club’s long-term future.

“I don’t think Europe is paramount for the rebuilding of this club. I think it’s a longer-term project than that. It would certainly help and it would give you a boost in terms of signing players and different things, but we’re a long way from that at the moment.

“I don’t think it’s paramount, but I do think it would be a huge help if we could go on a run. We’ve proved at different stages over the last two months that on our day, we’re as good as anybody. I don’t think there’s anything in between anybody. We’ve just lacked consistency and different bits and pieces.”

Dundalk will more than likely be without defender Daniel Cleary on Friday after he hobbled off after just eight minutes of the 2-1 defeat to Drogheda United at the weekend.

“It was a muscle injury,” explained Perth. “It was a dead leg on the same part that he’s been injured with. It doesn’t look great at the moment, but we’ll see how them things go. We’ve had a lot of bad luck in that sense.”

Meanwhile, the Dundalk head coach confirmed that Patrick McEleney will be out of action for at least eight weeks, while there’s no fresh update on David McMillan’s injury.

“There’s no way Patrick will play in the next eight weeks. We don’t know where we stand with David McMillan at this stage because he still hasn’t been able to get scanned at the moment.

“He’s got a scan to say it’s not a break, but we’d nearly rather that was a fracture because we’d know it’s a four to six week injury. We’re waiting to find out on the ligaments and we haven’t found that out for different reasons.”