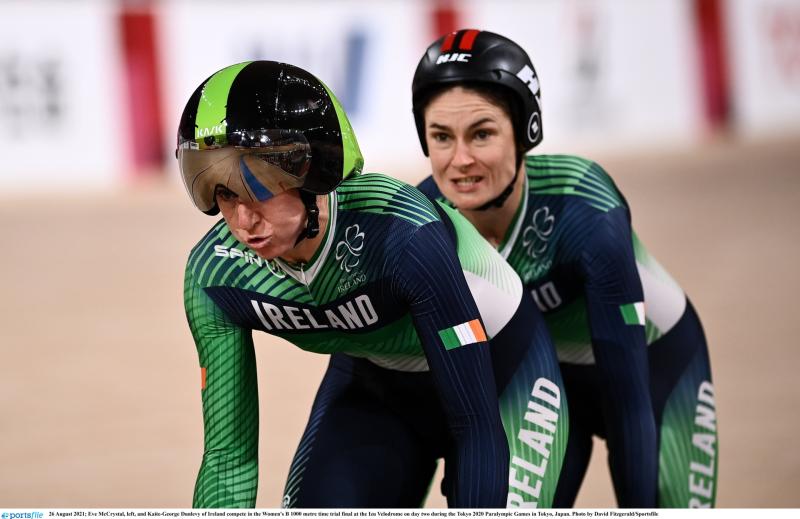 While most people in Louth were happily tucked away in their beds, getting some well-earned rest after another beautiful day of sunshine, The 2020 Paralympics continued in Japan with Dundalk’s own Eve McCrystal competing in the first of her four events in the tandem cycling.

She acts as the sighted pilot for partially blind athlete Katie George Dunleavy, becoming her eyes and making the vital moves while she helps generate the power from the back of the bike.

Their first event, admittedly their weakest discipline was held at 2AM this morning, the 1KM Time Trial at the Azu Velodrome. The event involves riding four laps of the track as fast as you can, a de facto sprint which involves little to no tactics. It is all about speed.

Yet in sprinting terms this is still seen as a long slog, one which takes great strength and is seen as one of the sport’s more brutal races. You need to be incredibly strong out of the gates and then keep your speed up nonstop for roughly 60 to 70 seconds.

The bikes themselves aren’t anything like what you’ll see at home, the girls must pedal throughout as the bikes are designed to almost buck up and down like a mechanical bull if there is nobody pedalling. Again, stressing the huge work these events take. Pure hell for their legs.

Eve and Katie are more endurance based, but that doesn’t mean that they wouldn’t be giving the event their all, everyone wants to start their games on a high. Of the ten pairs competing The Irish team were the eighth team to enter the velodrome.

At time they were hoping to usurp one of the three British pairings that made up the top three positions and from the off they were pushing hard.

They were 1.7 seconds behind after the first lap but were losing time on every lap to the team on top, Aileen McGlynn and Helen Scott. They had come within half a second of the Paralympic record so it was always going to hard to post a time anywhere near them.

A strong final lap saw the duo slot into fourth position, a little over a third of a second off the bronze at this stage of the competition with a time 1:09.232. This was a significant improvement on Rio where they posted a time of 1:12.33.

There was two more teams to go from Belgium and the Netherlands, both of which knocked two of the three British teams out of the medals, the Dutch taking the Gold with a new Paralympic Record time of 1:05.291.

In the end Eve and Katie finished a very respectable sixth, in an event she had admitted in an interview with the Democrat was more of feeler race in their eyes. Their real medal prospects are to come later in the Games on the road.

“The 1km time trial is a great warm up for us in the Velodrome, being among your competitors and the whole atmosphere it creates, it will be a good warm up as it is not our event” claimed McCrystal.

“I’d struggle a lot in the Velodrome with my asthma, there is no point in saying anything different. For me I’d have a huge love/hate relationship with the velodrome, I just have to get out of their in one piece as best I can for the road races.”

Their next event is the 3Km Pursuit Race which is due to take place early on Saturday morning around 2AM Irish time. It is a race they are much more confident in fighting for a medal, but as one of the favourites for the road events it is all about keeping her body in good shape for those events.

“It is a really hard effort, three and a half minutes of as fast as you can go from A to B. I’d be more endurance based, more longer distance so for me to go as fast as I can in a short period of time it just wouldn’t be my forte.”

“I can do it and do it well but then it’s about what condition I’m in after it so we’ll see what happens with it. You never know what might happen, it could go our way, but it will be tough as I can’t breathe in there.”

Saturday will be her last event on the track before traveling to a new location for the Road events, with the Time Trial which they won in Rio fixed for this Tuesday the 31st and the longer Road Race scheduled for Friday the 2nd of September.