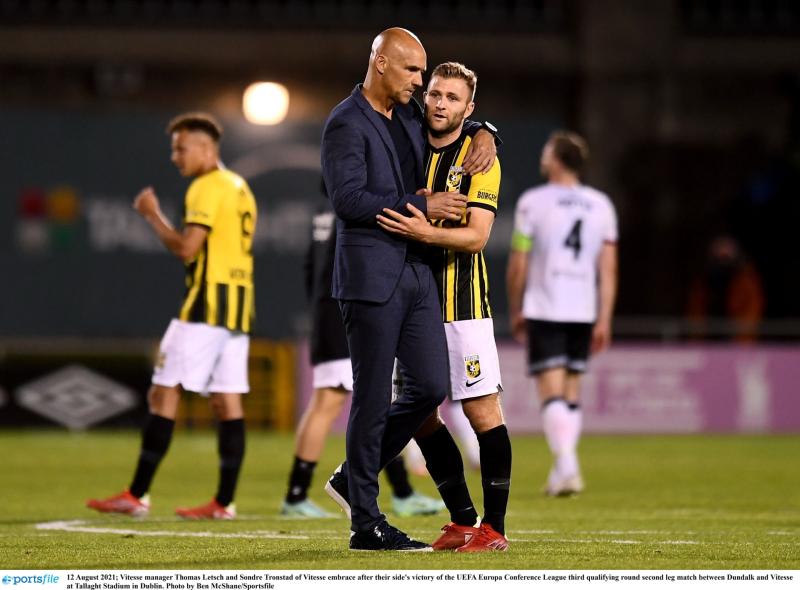 The German – who’s been in charge of the Eredivisie side since last year – saw his team race into a 2-0 lead at half-time, courtesy of goals from Matus Bero and Yann Gboho.

However, Patrick’s Hoban’s penalty on 71 minutes served as a precursor to sustained Dundalk pressure, who in desperate search of an equaliser, lay siege on the Vitesse goal.

“Instead of 52, I'm now 58,” said Letsch afterwards. “It was really long. I watched the time often and we were really lucky. It was a really hard 10 minutes.

“We scored at the right time and it was a big boost for us. We knew exactly that Dundalk would come out of the dressing room and will do everything to go here for the first goal and then for the second one.

“After the first 10 minutes, everything was under control. Then, we got out of our structure like we did in the last game and this is the thing we have to work on. You also could see, we are in the beginning of the season, they are in the middle of the season.

“It was really a nice atmosphere here. It seemed not like 1,500, it seemed like 5,000 and this was good. They pushed the team forward and we needed luck.”

When asked if Dundalk’s attacking approach came as a surprise, Letsch added: “If you see them on video and watch the games in the league, it's totally different. For example, the last game we also watched (the 4-1 home defeat against St Patrick’s Athletic), but this is football.

“You can watch games, analyse games, but what happens on the pitch is totally different. Therefore, on the one hand, I was not surprised because you saw this team play the last few years in Europe and they have this experience.

After overcoming Dundalk 4-3 on aggregate, Vitesse will now face Belgian giants Anderlecht for a place in the group stages of the inaugural Europa Conference League.