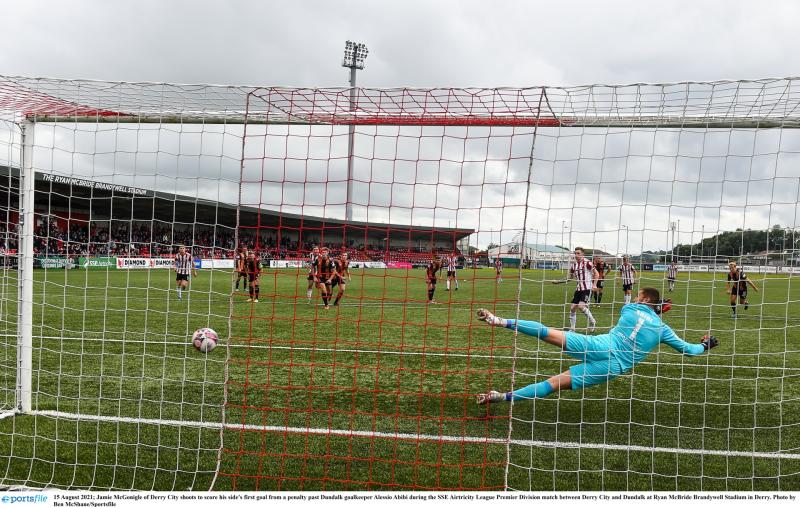 Dundalk FC suffered defeat at the Ryan McBride Brandywell for the first time since 2012 after Derry City recorded a 1-0 win over The Lilywhites in the SSE Airtricity League.

Jamie McGonigle’s penalty on 51 minutes proved to be the decisive goal, as Dundalk suffered a defeat which leaves them two points above the relegation play-off position.

Four points ahead of Dundalk heading into this match, Derry had the game’s first chance when Ronan Boyce’s cross from the right was headed over the top by McGonigle.

The Candystripes were enjoying all of the early pressure and created another opening early on, but Evan McLaughlin’s long-range effort was fired straight at Alessio Abibi.

Starting for Dundalk was Patrick McEleney – who is set to join Derry at the end of the season – and his attempt from distance veered well off target after 25 minutes of play.

Five minutes later, the Derry native had to go off injured following a reckless challenge by Daniel Lafferty, while Daniel Kelly also picked up a knock before leaving the pitch.

Between those substitutions, Lafferty curled a free-kick from a dangerous position up and over the Dundalk wall, but it sailed well off target with Abibi very much untroubled.

After a Sam Stanton delivery wasn’t cleared by Boyce, David McMillan’s acrobatic attempt had to be kept out by Nathan Gartside; seconds before the Dundalk forward stung the hands of the Derry goalkeeper with a powerful shot as the half drew to a close.

In first-half stoppage-time, McGonigle left Stanton for dead out on the left before feeding Joe Thomson, who beautifully turned Raivis Jurkovskis before hitting the post.

Derry took the lead on 51 minutes from the penalty spot after Andy Boyle handled in the box after being put under pressure by McGonigle, who then dispatched to make it 1-0.

Dundalk, visibly tired after their European exploits the previous Thursday, tried to find an equaliser, but Cameron Dummigan’s shot from distance was miles off the target.

Michael Duffy curled an effort which was deflected wide and the ex-Derry man thereafter headed into the grateful arms of Gartside after Patrick Hoban had whipped in a cross.

Dundalk finished the game with ten players after McMillan was stretchered off with five minutes of normal time remaining and they never looked like finding a leveller after that.

Hill Street Views: Opening up is not always easy, but it can help