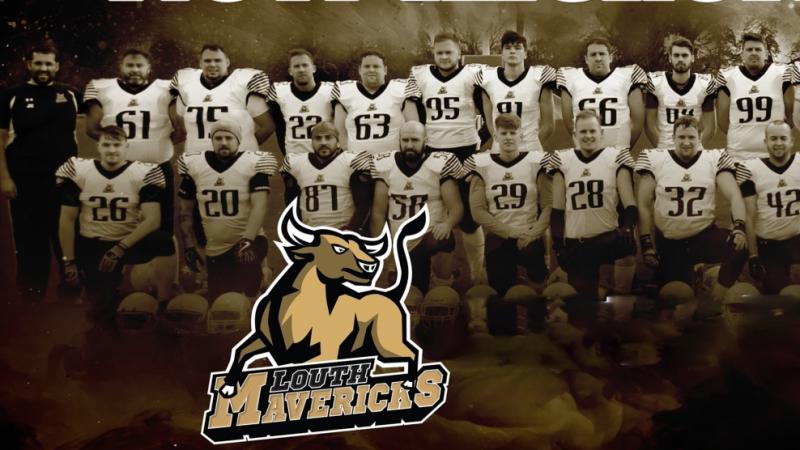 Having started the Shield season slow with two wins and two losses, the Dundalk based Mavericks needed two victories to clinch a playoff spot.

The matchups were unfavorable for the fourth seed Mavs with their first game being scheduled against hot favorites Trinity American Football Club and their second fixture against third seeds the Westmeath Minotaurs.

Despite being the under-dogs against Trinity who also had the home advantage, the Louth Mavericks were up for the battle. Two early interceptions from 17-year-old Larry Dabasinskas left the opposition QB Ben Dowling shell-shocked and unable to find an offensive flow.

Larry had spent the day before at the Irish Wolfhounds training, the sport’s national team having received a recent call-up to try out. He spent the day reading starting Irish QB Ben Dowling’s tendencies which is an important skill for any American Football defensive player and this assisted him greatly in the Shield fixture.

Scoring plays came from the air with Quarterback Aaron Finley connecting with Declan Mulvihill and Nathan Hearty, for two and one touchdowns respectively.

Defensive sacks coming from Meg Eze throughout the game put further pressure on Trinity’s offence with the game being clinched by an interception from Brendan Simms resulting in a shock 18-13 win for the Marvericks.

Unfortunately, the winning momentum couldn’t see the Mavericks through to the next fixture with the Westmeath Minotaurs ultimately coming out with the coveted playoff spot.

The Louth side were in control of the scoreboard for most of the game, leading by 12 points at one stage. The Minotaurs, however, are notoriously good at slowing down offences with their awkward defensive plays.

Their Quarterback Conor Brennan staging a comeback in the fourth quarter of the game, with the playoff spot being clinched by the Minotaurs on a hail-mary pass to their near seven-foot-tall wide receiver Jack Lynch, shattering the Mavericks’ Multi-Shield hopes.

“It was a disappointing finish to a fantastic Shield campaign for the club, however we now look ahead to the AFI Flag League and building the full-contact kitted Senior Men’s American Football team for the Premier One AFI kitted league” stated Mavericks Board member Kelly Dwyer.

“These competitions have always been our priority and the win against Trinity today has gone a long way in boosting the confidence in the team and instilling the belief that the Mavericks can ultimately go the distance and bring the AFI League cup home.”

The club trains weekly at Dundalk IT, their flag team which came so close to Shield glory practicing on Thursdays at 7pm and Sundays at 12pm. Full contact training is due to return soon with their session at the college usually fixed for Sundays at 10am.

If you have gotten the bug watching the NFL or the Super Bowl, the Mavericks are set to run a series of full contact rookie recruitment camps across the county to give prospective Tom Brady’s, Travis Kelce’s or JJ Watt’s the chance to see what its like to play American Football.

The first of these camps headed to St Oliver’s Community College Drogheda this evening, with a second one fixed for next Sunday the 22nd of August from 10 am to 1 pm at the same venue.

"We have all of the equipment; pads and helmets, required so attendees need only bring boots and gum shields” added Dywer.

“There is something for everyone within the club, with senior men’s’ kitted American Football teams and non-contact Flag Football teams available for women, men and those over 16.”

Whether you are fast or slow, short or tall, American Football requires a diverse mix of talents and the club are sure find the position perfect for you. Further information is available from their social media pages or you can contact the club directly at louthmavericks@gmail.com.