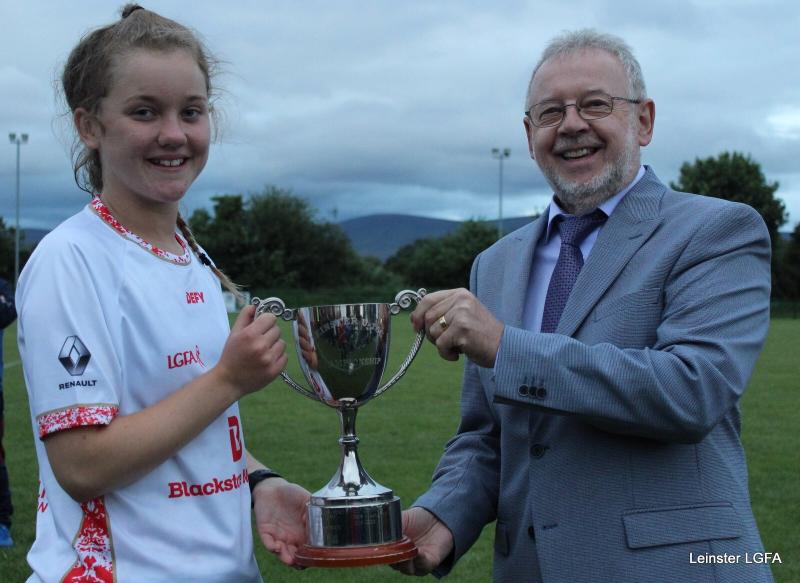 The Louth U16 ladies secured an impressive victory in the Final of the Leinster U16 C Championship. The match took place in Ballymore Eustace GAA, Co Kildare – a neutral venue for the Louth and Kilkenny teams to have their clash.

It was Kilkenny that secured the first score of the evening with a well-taken point, but Louth’s Órlaith Carolan was quick to respond with an on-target strike that put the ball out of reach of Kilkenny’s goalie and into the back of the net for The Wee County's first of six goals on the night.

Kilkenny scored another two points, but a swift second goal from Shauna Lynch put the Girls in Red three points ahead. Despite a goal being scored by Kilkenny, Louth stretched their lead during the first half of the match as Órlaith Carolan, Mischa Rooney and Lucy Watters all rattled the net to build up a nice cushion for their side.

Fantastically assisted by Ava McNally, Lucy White and Izzy Meehan, the Louth forwards hammered eight points over the bar in this first half – 4 by Mischa Rooney (who went on to deservedly win the Player of the Match award), two from the boot of Katelyn Murphy and one apiece by Shauna Lynch and Carolan to go 5-8 to 1-3 in front at half time.

Louth’s defence was very strong throughout the match despite being hugely tested at the start of the second half when Brian Lynch's troops were reduced to 13 players for ten minutes. Kilkenny found their feet and the scores for the Cats started to mount up with 3-4 bagged during the third quarter.

However, Tara Kelly, Hazel Malone and Abigael Martin stood strong in the full back line and together with Amy Everitt, Chloe McCarragher and Hannah Leech the esteemed Louth Captain, the Girls in Red posed a real challenge for Kilkenny. Niamh McGeough, the Louth Goalie, was outstanding during the entire match - making crucial saves to keep her team in the lead.

In the end just six points separated the sides as the Wee County secured the Leinster C Championship Cup with a performance that had Bryan Lynch, along with his mentors Claire Byrne, Darren Clarke, Deirdre Ryan, Sylvia Smyth and Alice Turley, jumping for joy.