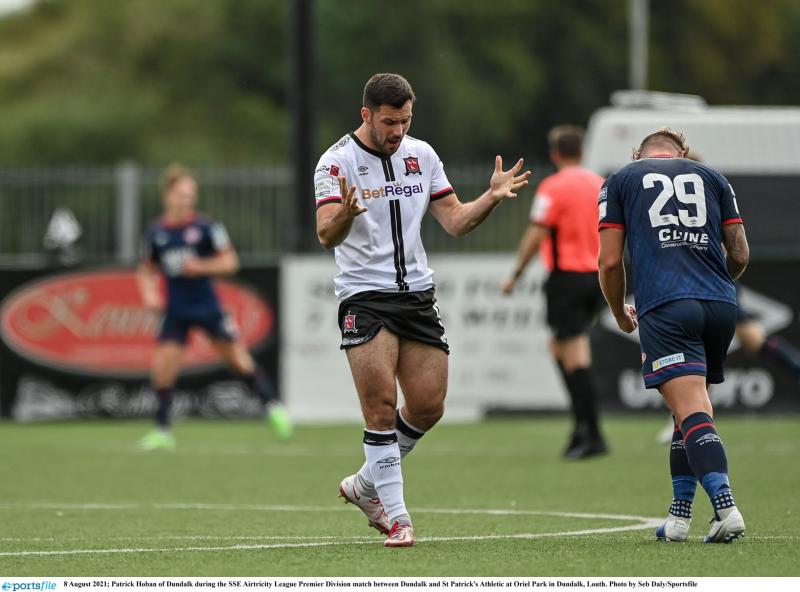 Dundalk suffered defeat for the first time in the SSE Airtricity League at Oriel Park under Vinny Perth on Sunday afternoon after they were thrashed 4-1 by St Patrick’s Athletic.

Pats, who hadn’t won a league game at Oriel since 2012, went ahead through Reading loanee Nahum Melvin-Lambert, but Patrick Hoban equalised for The Lilywhites.

The Saints ran riot after that, with a brace from Mattie Smith and a Chris Forrester penalty adding much gloss to what was a superb day at the office for the Inchicore side.

Despite that bright opening, it was St Pats who went ahead after 12 minutes had elapsed.

In the midst of sustained pressure from the visitors, Dundalk failed to clear their lines before their ex-favourite, John Mountney, took a shot which could only be parried by Alessio Abibi and into the path of Melvin-Lambert, who finished into an empty net.

The Lilywhites equalised on 26 minutes when Patrick McEleney dispossessed Alfie Lewis in his own half before setting the scampering Michael Duffy on his way down the left.

Duffy played it across goal for Hoban, who turned home from close range to make it 1-1.

Dundalk should have gone ahead when Patching’s free was spilled by Jaros, but Darragh Leahy – from four yards out – hit straight at the Pats goalkeeper on the rebound.

Indeed, they were made to pay for that spurned chance, as Pats went back in front four minutes before the break when Ben McCormack’s shot was deflected into the path of the grateful Smith, who made no mistake as Stephen O’Donnell’s side led 2-1 at half-time.

Perth’s side went in desperate search of an equaliser after the teams re-emerged for the second half, and Patching’s free had to be brilliantly tipped over the crossbar by Jaros.

However, disaster struck when Abibi needlessly collided with Pats substitute Billy King in the box to which referee Robert Harvey, without much hesitation, pointed to the spot.

Up stepped Forrester, and he sent the Albanian goalie the wrong way to make it 3-1.

Dundalk almost got themselves back into the contest when after some good work by Duffy down the left flank, Greg Sloggett flashed a shot inches wide of the far post.

Pats put the icing on the cake to seal an impressive win when Sam Stanton sliced an attempted clearance into the path of Smith, who couldn’t believe his luck, as he scored his second and Pats’ fourth to keep up the pressure on league leaders Shamrock Rovers.

After Sean Murray volleyed off target, Hoban crashed an effort off the frame of the woodwork late on after being played through by Wilfried Zahibo in stoppage-time.