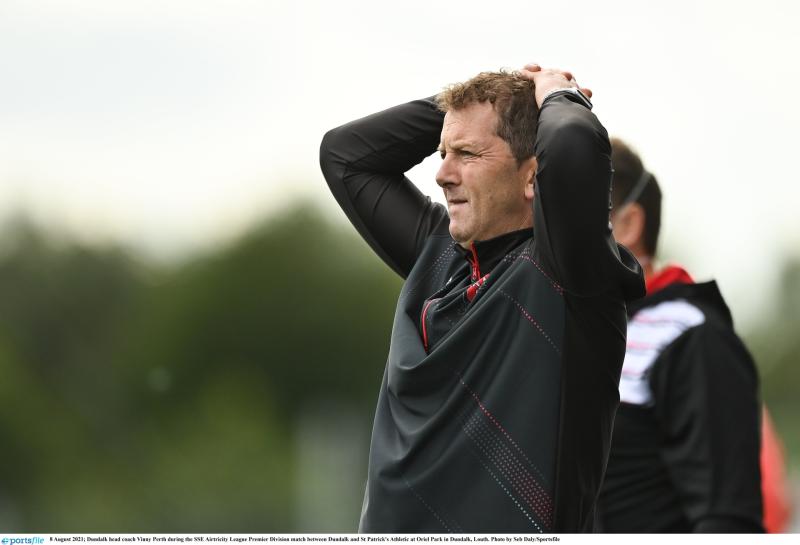 Dundalk FC head coach Vinny Perth says that since returning to Oriel Park in June, he has received nothing but support from the club’s controversial American owners, Peak6.

Perth claimed that he was recently close to bringing in four new players, only for the deals to collapse for a number of reasons, but has kept the door open for new arrivals.

Dundalk were thrashed 4-1 on Sunday afternoon at Oriel by title-chasing St Patrick’s Athletic in the SSE Airtricity League, but remain just four points behind the top four.

“There is this rhetoric around that everything is wrong and it’s clearly not,” said Perth.

“We’ve had a bad day today, but it’s clearly not all wrong. The length and terms of contracts – that’s a separate issue that I’ll resolve in the next week or two in terms of where we’re going.

“Beyond that, the board have completely supported anything I’ve asked for. I wanted to sign four players and the finance was in place to sign them, but the deals fell through for different reasons.

“I think today probably proved that we need a little bit more strength and depth in certain areas. If we’re going to play with a 4-3-3, we probably need a hand in the wide areas for argument sake.”

While the Oriel door has been left open for potential new arrivals, one player definitely departing is Patrick McEleney, who confirmed he will be joining Derry City next year.

However, Perth has been disappointed by the ‘outside noise’ relating to McEleney’s impending departure to Derry, as well as several other club matters in recent weeks.

“Daryl Horgan in ’16 – perfect example. Did he score against Zenit St Petersburg? He was out of contract and he was on his way to another club, but it wasn’t the headline of the day.

“I’m sure some smart people were able to say this was a disgrace because Andy Boyle left in ’16 – these things happen, they’re part of football. It’s so easy to attack our players.

“People said the board stopped me staying over in Limerick, nonsense. I made that decision because I didn’t want to. I got told that we weren’t going to stay up in Dublin and train in Tallaght and we did. There has to be a little bit of balance.

“The world is changing and I accept it, but some of the stuff is nonsense. I accept Patrick McEleney is on the move, but so was Daryl Horgan in Zenit St Petersburg when he scored an amazing goal. It didn’t become a big thing on social media that Daryl was leaving.”

Perth also believes rumours that Peak6 are actively looking to sell Dundalk are unfounded, and believes the US-based consortium will continue to invest into the club.

“You say worries, but what does that mean? Does that mean they are pulling out? I don’t have them fears.

“I do (think they will stay). For someone to report that they’re going to leave, or they’re selling the club – that’s just not factual information.

“We used to sit around the pub, have a drink and chat about rumours and stuff. Now we’re throwing stuff out there that it’s gospel. Even though it’s been unproven, it’s still creating a mindset around the club. I think it’s a bit unfair on our owners in my opinion.”