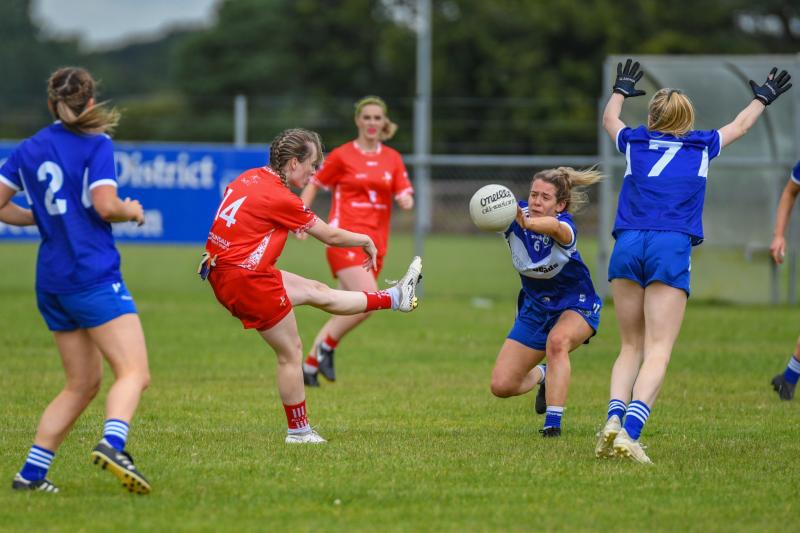 Lauren Boyle tries to get a shot off for Louth during their encounter with Laois in the All Ireland Intermediate Quarter Final played in Kinnegad last weekend. Pic: Warren Matthews

When the Louth ladies reflect on this historic Intermediate All Ireland Quarter-final with Laois, they will know in their hearts that it was quite simply one which got away from them.

In both halves the Wee County came out with purpose hitting their opponents with 1-1 without reply, but sadly they were significantly outgunned around the middle during crucial stages in the contest.

Laois used that dominance to counterattack time after time from Louth’s own kickouts. They hit 2-2 in this fashion in a 10-minute spell before the second half water break to build up a seven point cushion which Louth would never bring down any lower than six.

They threw everything but the kitchen sink at them, kept the O’Moore girls to just a point for the remainder of the contest but despite keeping the ball for prolonged periods they just couldn’t convert enough of their chances meaning their 2021 season came to an earth-shattering halt.

Wayne Freeman’s troops had the wind advantage and that resulted in them going for a very direct kicking game, utilising long and quick passes into their forwards who were more than capable of then taking on their markers with pacey solo runs.

In comparison Laois largely opted to take quick and short kick outs, go through the phases and work the ball patiently down the field. It was something they needed to work extremely hard at as a very well drilled defence had their opposite numbers well marked and space was hard to come by.

The pressure they put on the Laois attack was leading to plenty of unforced errors, backed up by the fact they won 13 frees inside their won half throughout the contest.

The Girls in Red were out of the blocks as early as the second minute, a long and low diagonal ball from Rebecca Carr finding Lauren Boyle who sprinted into space before firing the ball over the bar.

Three minutes later came the tie’s first goal, this time it was Aine Breen with a low ball into the Cooley Kickhams player in the corner, with ease she turned her marker Aimee Kelly inside out and duly rattled the back of the net to open up an early four-point lead.

A minute later Laois got their first score, Mo Nerney was fouled by Eilis Hand as she soled towards goal, Sarah Anne Fitzgerald duly tapped over the simple free. It was a vital score as on their last two ventures forward, huge work and commitment to create opportunities had resulted in two wides.

One of the county’s most well known sporting names is Kate Flood, due to her stint as a professional Aussie Rules star in the past and she was once again getting plenty of service. She was gliding past defenders with ease but sadly her shots at the post at this early period went short and wide.

After a nervy start Laois slowly got themselves back into the game, their huge players starting to get an edge in the aerial battle around midfield. At this stage Louth’s aggressive tackling was helping them to regain possession afterwards but it was an early sign of the dominance yet to come.

The Girls in Blue’s link up play gradually got better and better, another point from Fiona Dooley halving their deficit to two points on 10 minutes, while on the cusp of the water break one of five lost kick outs for Louth resulted in Laois taking the lead for the first time.

Anna Healy intercepted the restart from Una Pearson before finding Fitzgerald in the corner, she fisted it into the air for an inrushing Jane Moore to grab and blast home to put her side 1-2 to 1-1 in front.

After the sos uisce Laois bagged another score and at this stage it had been 13 minutes since The Wee County had made the umpire raise a flag of any colour. They needed a score and quickly.

Niamh Rice was a huge late loss to the team but her replacement Eimear Byrne had a great game, acting as an anchor to many of her teammates attacking moves, her only score of the day came on 23 minutes to break that barren spell when dissecting the posts.

Laois struck back well with three scores in a row, two from Fitzgerald and one from Dooley to regain the lead, but there was plenty of chances for Louth to quickly negate those points with a goal late into injury time.

First up was Denise McKenna, who did well just to keep the ball in play on the endline before duly leaving Aimee Kelly in her dust. From point black range Eimear Barry produced a sublime save to deny her attempt.

Next up was Flood who was played into a one-on-one position following a superb bit of fielding by Byrne but with the goals at her mercy she hit her shot wide.

It was an impressive injury time showing given it was spent with 14 girls as Lauren Boyle was sinbinned late on for a high challenge on Ellen Healy.

Louth bagged a vital free from Flood on the half time whistle to narrow the gap to three points, 1-6 to 1-3. All to play for in the second half in the battle of the Division Three and Four champions.

Freeman’s troops once came out with purpose and soon regained their lead as they hit 1-1 in the first eight minutes of action.

Two minutes in Flood showed her sublime quality, reading the bounce of ball beautifully before darting away from two defenders and at the second time of asking she took no prisoners to leave the game all square with a goal.

Six minutes later she turned provider for Boyle who split the posts and put Louth back in front for the first time in 20 minutes. Sadly, instead of kicking on, the aforementioned dominance from Laois around the middle kicked into gear.

They were hit for 2-2 without reply in a 10 minute window where practically every Louth kick out was intercepted by Laois, almost always leading to scores. The decisive second and third goals came on 41 and 45 minutes respectively from Erone Fitzpatrick and Mo Nerney.

Fitzpatrick’s goal came off an interception as Louth tried to play it out from the back, while Nerney’s goal started from one of many misplaced kickouts intercepted by Laura Nerney before a great team move left Mo Nerney with a simple finish. Louth at this stage were camped inside their own half.

Many teams would’ve backed down, but following a water break The Girls in Red came out swinging. Their urgency and work rate seeing them turnover Laois all over the pitch. This newfound intensity resulted in two points for Flood that narrowed the gap to three.

Then came the game’s most controversial moment on 64 minutes, a quickly taken free from Boyle found her captain Shannen McLaughlin in space. She duly fisted it into the air for the inrushing Flood to bury home. Sadly it was deemed a square ball by referee Kevin Cororan.

Louth gave it everything from here but just could not get the score they needed, as Laois hung on to bag a semi-final against Wexford.