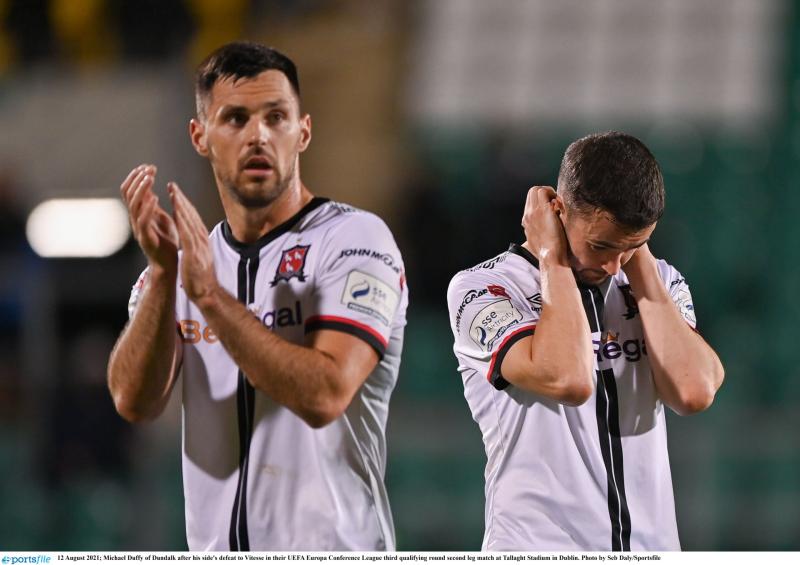 A spirited Dundalk FC went out of the UEFA Europa Conference League on Thursday night after losing 2-1 (4-3 on aggregate) to SBV Vitesse Arnhem at Tallaght Stadium.

Dundalk were outstanding for the first 25 minutes, but found themselves 2-0 down at half-time after Matus Bero and Yann Gboho both netted for the classy Dutch outfit.

Patrick Hoban’s goal from the penalty spot with just under 20 minutes remaining gave The Lilywhites hope, but try as they might, an equaliser just simply didn’t materialise.

Dundalk made three changes from the first leg – which finished 2-2 in Arnhem a week earlier – as Hoban, Cameron Dummigan and Will Patching were handed starting berths.

In what was an explosive start to an enthralling game, The Lilywhites thought they had gone ahead inside 40 seconds when Will Patching fed Michael Duffy and he finished superbly past Markus Schubert, but the goal was unfortunately ruled out for offside.

At the other end, Maximilian Wittek’s inswinging corner from the right wasn’t dealt with convincingly by Alessio Abibi before Hoban cleared off the line from Danilho Doekhi and after Dundalk failed to clear the danger, the Vitesse captain fired well over the crossbar.

Dundalk were putting intense pressure on their much-fancied Dutch counterparts and Duffy’s dangerous-looking cross from the left only just evaded the inrushing Hoban.

Vinny Perth would have been delighted with his side’s application in the early stages and Schubert had to save brilliantly from Hoban’s effort after he had left Alois Oroz for dead.

From the resulting corner by Duffy, Patrick McEleney – scorer of both Dundalk’s goals in the first leg – unleashed a powerful shot which again had to be kept out by the German.

Another Duffy corner was met by the head of Sonni Nattestad, who forced Schubert to tip over the bar, but the Faroe Islands international was penalised for a foul in any case.

In spite of Dundalk’s early dominance, Vitesse took the lead on 28 minutes when a shot from Nikolai Frederiksen took a wicked deflection off Andy Boyle, with the ball falling kindly into the path of Slovakian international Bero, who then tapped into an empty net.

With that goal, the complexion of the game swung in the favour of the visitors, who could have got a second when Million Manhoef’s attempt was blocked on the line by Boyle.

The menacing Manhoef played an incisive pass into the feet of Wittek, but Abibi managed to deny the Vitesse man before Nattestad eventually cleared the danger.

Vitesse inevitably found their second on 38 minutes when Frederiksen slipped Gboho through on goal and he calmly slotted past Abibi to make it 2-0 to the Eredivisie side.

As the first half drew to a close, Oussama Darfalou headed straight at Abibi, while at the other end, Schubert made an absolute mess of a Dummigan cross but recovered well.

Dundalk desperately went in search of a route back into the game and five minutes into the second period, Duffy headed wide at the back post from a decent Patching cross.

Under pressure from Duffy after a botched Doekhi clearance, Schubert had to punch clear of goal, but only as far as Darragh Leahy, who saw his looping header go off target.

Looking to put the game to bed once and for all, Vitesse had chances through Frederiksen – who sliced his shot off target – while Abibi had to block from Manhoef.

The Lilywhites got themselves back into the game on 71 minutes when from Leahy’s cross, Duffy was bundled over in the box by Sondre Tronstad and a penalty was awarded.

Up stepped Hoban, and he confidently dispatched, sending Schubert the wrong way.

Dundalk had several chances after that to equalise and force the game into extra-time, the first of which fell to substitute David McMillan, who fired his long-range shot wide.

The impressive Duffy glided down the left-hand side before cutting inside and unleashing a shot which had to be excellently pushed around the post by Schubert.

From the resulting corner, Duffy floated in a delivery that wasn’t dealt with by the Vitesse defence and Raivis Jurkovskis planted a header straight into Schubert’s arms.

With three minutes remaining, Duffy floated a beautiful set-piece delivery right onto the head of McMillan, but once again, it fell straight into the grateful hands of Schubert.

There was still time for one more chance for Dundalk as Daniel Kelly breezed past the challenge of Tomas Hajek before flashing across goal, with McMillan unable to connect.