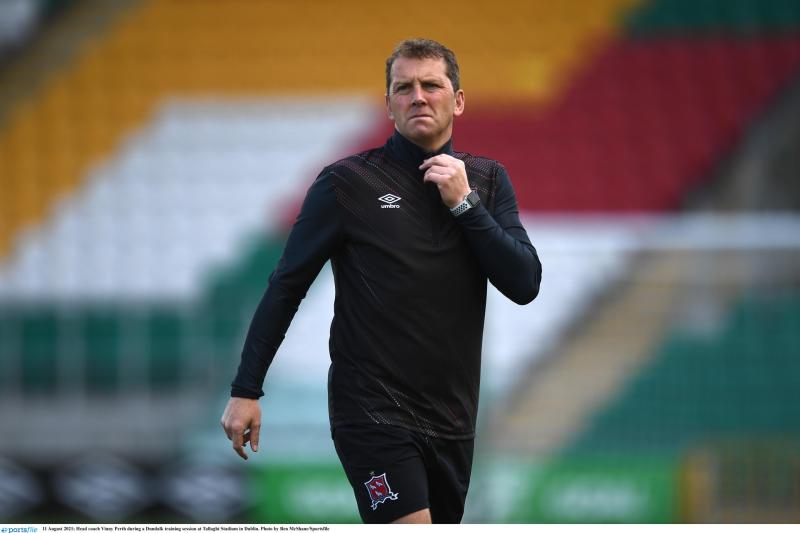 Dundalk FC head coach Vinny Perth says that his team will attack SBV Vitesse when the sides meet each other for the second leg of their Europa Conference League third-qualifying-round-tie this coming Thursday night at Tallaght Stadium (kick-off, 8pm).

The Lilywhites had to weather a storm in the first leg at the GelreDome in Arnhem and found themselves 1-0 behind at the half-time break after Matus Bero put Vitesse in front, but Patrick McEleney’s brace in the second period almost gave Dundalk an historic win.

However, Lois Openda’s 88th-minute goal denied the League of Ireland side, but Perth was pleased with his side’s application against their much-fancied Dutch counterparts.

“You can’t be attack-minded coaching and then rip that up one day and sit in,” he said. “People have said to me that we need to keep the tie alive and I hate that comment. That’s the old League of Ireland way of parking the bus and to be fair, we had to do that at times in the first half.

“I said it to the players before the game that there’s chances against these on the counter-attack. They’re one of the most attacking sides I’ve ever seen. Watching them on video, their style is amazing. They play with a back-three and the one in the middle (Riechedly Bazoer) goes and plays in midfield or wherever he wants.

“At the same time, if we keep a clean sheet, we can go through in the tie. We’ve got to back our forward players to score goals, so for me, that’s the key thing.”

Since his return to the club in June, Perth has brought a real element of stability to Oriel Park, with The Lilywhites losing just two of his 12 games in charge in all competitions.

However, he has attributed the team’s recent upturn of form solely to his playing staff and has cited leadership within the squad as the main reason for Dundalk’s revival.

“The ship hasn’t turned around yet in any way, shape or form, but it’s certainly steadied,” he added. “All I’ve done is create an environment for the players to show how good they are and I think they have capitalised on that.

“We’ve seen real leadership from people like Patrick McEleney for example – not just on his goal there tonight, but before that, he’s been a real leader. There’s also in this new group emergence of leadership – people like Daniel Cleary, Darragh Leahy and Andy Boyle. This is the opportunity to create a new group, a new future. The players have just been absolutely outstanding since I came back.”

Dundalk’s key player in Europe so far this season, Will Patching, missed the 2-2 draw with Vitesse due to a stomach bug, but will be available for the return leg in Tallaght.

Daniel Cleary, who hasn’t kicked a ball since May because of a quadriceps tendon injury, is also thought to be edging closer to a return, but isn’t likely to play against Vitesse.

“Will is fine,” said Perth. “He had a tummy bug and we left him out in the end. I could have brought him on if I wanted to, but it’s just one of them things. We needed real energy and I thought our bench was excellent tonight.”

Thursday night’s match is to be refereed by Alain Durieux (Luxembourg) and will be streamed live via the subscription-based LOI TV platform, with passes costing €10.