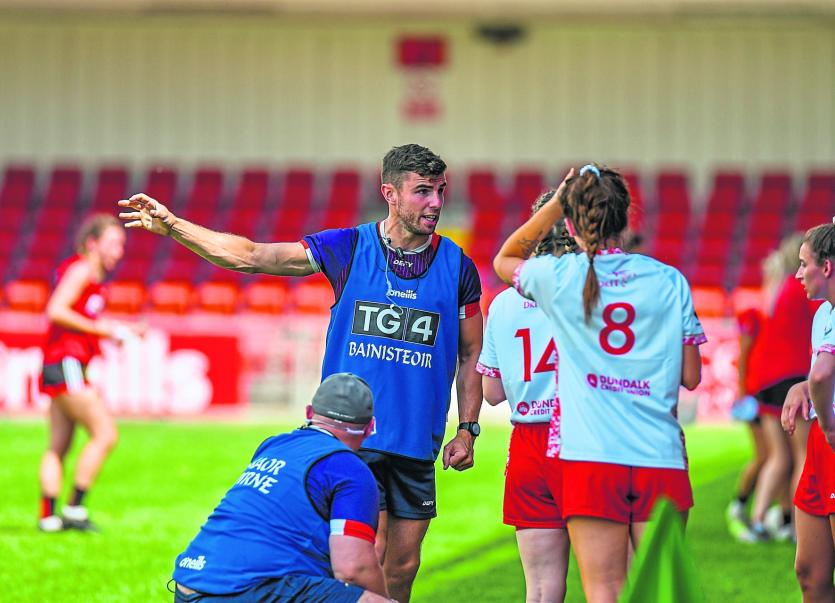 Louth manager Wayne Freeman on the sidelines during their championship opener away to Down. Pic: Warren Mathews

Those who have been watching the Louth ladies throughout 2021 have been treated to high scoring, superb defending and ultimately wins for the Wee County who came into this contest in flying form having won the Division Four Crown.

Unfortunately, it was a different story on a sweltering hot day in Newry, the Wee County kept to just two points from play on a day they registered an uncharacteristically high 10 wides. Seven of those came in a second half they largely dominated.

In a way they did well to stay in the contest, Down hitting 1-2 early on and keeping Wayne Freeman’s troops to just a point before the first water break. Yet they reacted well, took a foothold on the game and ultimately kept the home side scoreless for 20 minutes either side of half time.

Sadly, their attack was far from the well-oiled machine we have become accustomed to in recent games, their wides proving costly as a two point win sealed Down’s place in the Quarter Finals and left Louth in a do or die clash with Offaly on Sunday.

Down had the advent of already playing a championship game, having defeated The faithful County a week earlier and you could sense that sharpness from almost the first attack. Yet it is was a Louth mishap that put them on the back foot from as early as the second minute.

A short kick out from Una Pearson was meant for full back Sarah Quinn but it was intercepted nicely by Aisling Cull. Pearson got her hand onto it to make the save but sadly it still trickled into the back of the net.

Down dominated the possession in the opening quarter, a mix of speedy solo runs and patient build up play proving tough for the Wee County to handle. They were struggling to get near their markers and when they did their tackles lead to fouls, the home side drawing six in the first ten minutes.

Louth were going short with their kick outs as they tried to play the ball up the field, but Down were resilient in defence, camping their opponents in their own half thus isolating the forwards.

With the ball rarely passing midfield, it was impossible for the likes of Kate Flood, Lauren Boyle and Niamh Rice to have any influence on the game, a single miss for Flood the only attempt in the first 13 minutes of action.

Two Natasha Ferris frees coupled with a rare score from play courtesy of Oonagh Lavery had the Ernesiders 1-3 to 0-0 up approaching the water break. With so little possession up top and struggling to get near their markers in defence, it felt like Louth could be down for the count already.

Something needed to change and fast, to their credit the Girls in White (their away strip) battled back from here keeping their hosts scoreless for the remainder of the half.

Either side of water break, Louth bagged frees which were converted by Boyle and Collins, as a direct ball into their corner forward Niamh Rice started drawing in the fouls.

They began putting more pressure onto Down’s kickouts, making them work a lot harder if they wanted to create scorable chances, while their aggression in the tackle was now paying off as Down began dropping the ball or overcarrying it before they ever got the chance to shoot.

Yet despite their newfound dominance, they only scored once more before the break as a second free of the day from Boyle left them trailing by 1-3 to 0-3 at half time. Their hard work and determination bringing them right back into contention.

In an extremely low scoring game, efficiency was going to be key, sadly that part of the game was lacking on a day where the Louth forwards were much better marked and working off a lot less space than they had become accustomed too.

Two of their seven second half wides came within 90 seconds of the restart, a fact that became much more of a killing blow when Down ended their 20 minute barren spell without a score when Coll pointed on 33 minutes.

Yet Louth soldiered on nicely with the next three scores, Collins linking up well with Rice to get their side’s first from play on 37 minutes, which was quickly followed up by a free from Rice a minute later.

At this stage the Girls from the East were completely outperforming their neighbours from the North, the only problem was they couldn’t turn this dominance into enough scores.

On two occasion Louth had scorable frees from close range, both of which were sliced wide, the type of misses that summed up their day.

They were throwing the kitchen sink at them, but their chances weren’t helped by the loss of Denise McKenna to a yellow card on 49 minutes, her ten minutes in the bin meaning she was gone for the vast majority of time left left on the clock.

In the end two more points for Down were enough, but they count themselves lucky not to have met Louth on a day where their forwards were in song, ten wides in the end proving costly.

Their comeback will leave them very confident, as they go into an all or nothing battle with Offaly this weekend, a team they have already beaten in the league.