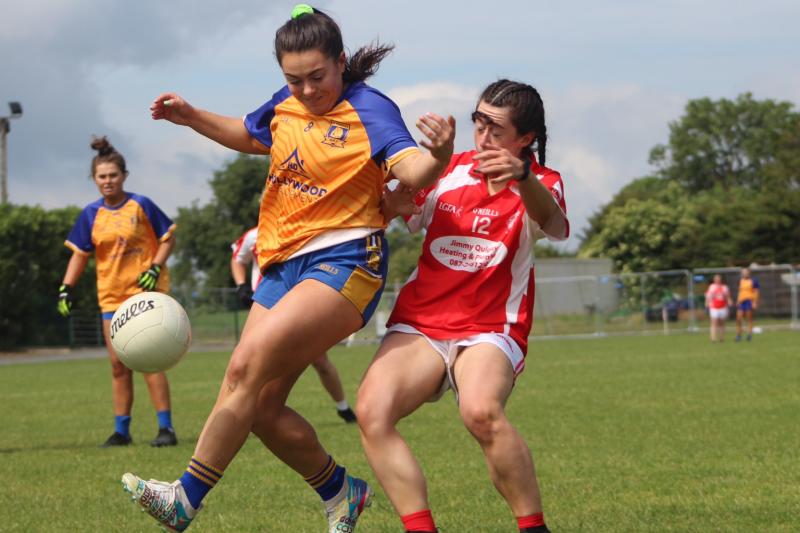 St Brides registered their second win in succession against a weakened Mochtas outfit on Sunday morning in Knockbridge. The strength of the opposition, however, did not detract from the quality of play from the hosts from the outset.

In the first ten minutes, the Brides put 1-4 on the score board without reply. Two points apiece from Emma McArdle and Kodie McEneaney coupled with a clinical finish from Lily Fagan after a fine save by Niamh Kirk in the Mochtas goal put the team in red and white into an almost unassailable lead early on.

A fisted point by McEneaney was the culmination of some tireless team work that started from their own goal line after the Knockbridge outfit snuffed out a Mochtas attack. This was the last score before the water break as both teams spurned chances at scores.

Despite marshalling her defence with the experience people have come to expect, Dearbhla O’Connor and Co could not halt the waves of Brides attacks as Aimee McNally got in on the action with her first point after the water break.

The Mochtas then had a bit of a purple patch with Lauren Keenan driving her team on from midfield, but a couple of wides were the only outcome of this brief period of dominance.

McEneaney added her fourth of the game after a long, rangy run before Laura Kieran registered the visitor’s first point of the game from a free. McEneaney finished the half of as she started it with a point for the Brides to leave the score at the break 1-8 to 0-1.

Changes were made throughout the second half by the Brides, but the points kept coming. Three points from Emma McArdle, one after great interplay with Sarah Fagan, and one more from McEneaney after a trademark run from her own 45, put the game out of sight.

A free from Laura Kieran was followed by two more points from St Brides – a fisted point from Sarah Fagan and a point from play from Emma McArdle.

After the water break the Mochtas saw their second spell of dominance in the game as they outscored their opposition 1-4 to 0-1. Kieran got her third point of the day followed by points from Grace O’Reilly and Christine Carolan.

In reply, former Mochtas player, Gráinne Mackin, scored a point for the Brides. A fantastic run from defence by centre half back, Leah Farrell, ended in Kieran finding the net, before the Mochtas midfielder, Sarah Englishby registered the final point of the day.