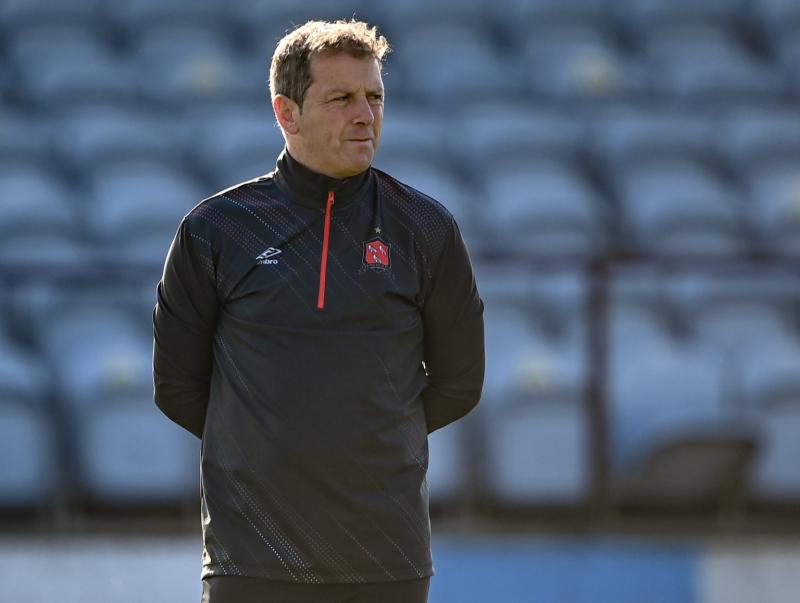 It’s now nine Louth derby wins on the bounce for Dundalk, who recorded a hard-fought 1-0 win over Drogheda United at Head in the Game Park in the SSE Airtricity League.

Michael Duffy’s goal in the first half was all that separated the sides, as The Lilywhites recorded a much-needed fifth win of the season and moved up to seventh in the table.

Drogheda made two changes from their 5-0 humbling at Bohemians on Friday night, with Killian Phillips and Luke Heeney both coming into Tim Clancy’s starting line-up.

For the first time since 2017, Drogheda supporters – albeit only 100 – sampled Premier Division football, and they looked lively in what was an otherwise scrappy opening.

It took 15 minutes for either side to produce anything of note, the game’s first opening falling the way of Dundalk when Patrick McEleney floated a ball into the path of Patrick Hoban, but he couldn’t direct it home as David Odumosu gathered.

Chances were few and far for both sides throughout the first half, but Dundalk went ahead on 35 minutes when Duffy’s initial header from a McEleney cross was saved by Odumosu.

From the resulting rebound, the young Drogheda goalkeeper blocked again from Daniel Kelly, but only as far as Duffy, who fired home despite the best efforts of Daniel O’Reilly.

Despite looking the better side in the early stages, it took 40 minutes for Drogheda to create anything, with former Dundalk favourite Dane Massey heading over from Heeney’s corner, while not long after that, James Brown blazed over before half-time.

The second half was much like the first, with both teams huffing and puffing, but neither goalkeeper was really worked in what was an overall entertaining if not eventful game.

McEleney did fire an effort over the top after being cleverly played through by Duffy, who minutes later, curled a free-kick attempt over the wall, but Odumosu easily saved.