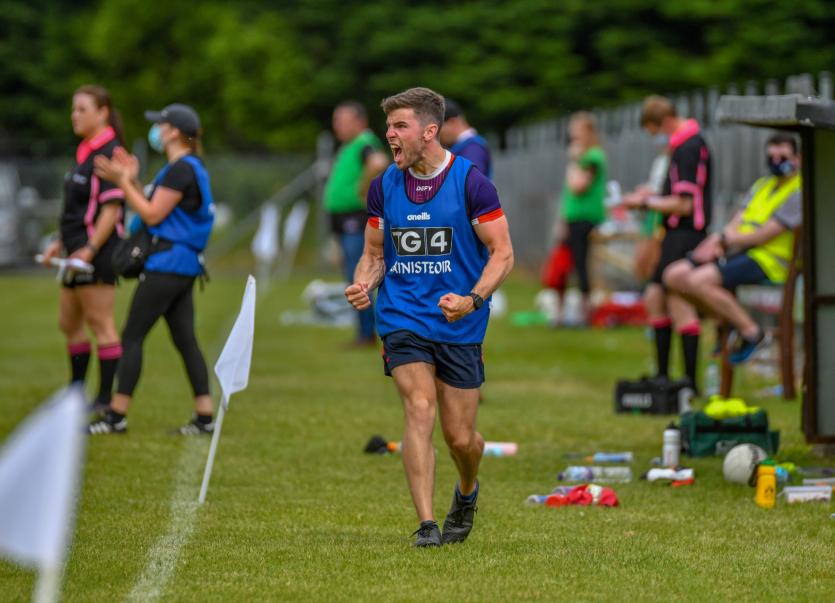 Another date with Leitrim is now on the horizon after a glistening performance in the Kildare sunshine booked Louth’s spot in the Lidl Division Four National League Final.

Just a solitary point of their final total of 3-10 was got from placed balls, the Wee County showing an ability to turn the screw at vital times to earn a nine-point win in the end. Offaly supplied gallant opposition, but whenever under pressure Louth quickly pegged them back in fine style.

Wayne Freeman’s side played a very direct game, kicking it long into the forwards and got off to the perfect start on three minutes when a Lauren Boyle shot dropped into the back of the Offaly net, before one apiece from Denise McKenna and Niamh Rice had them up by 1-2 to 0-0 on 10 minutes.

Offaly relied on turnovers to create their chances, defending in packs in the hope of drawing mistakes from Louth, before slowly building the ball up the field. Unfortunately, their final ball was letting them down and they tended to lose the ball before getting their shots off.

The girls in Red were not at their clinical best early on, with Shannen McLaughlin, Boyle and Aine Breen missing opportunities to increase their lead, while also allowing their opponents to pick up the ball more often.

Offaly displayed a fine running game at times, Mairead Daly and Grainne Egan the main protagonists for the Faithful County and it was these two cunning attackers that combined for their sides first goal on 13 minutes.

Daly soloed her way past four Louth defenders, before duly teeing up Egan who took no prisoners when blasting it into the net, while to rub salt into the Louth wounds Eilis Hand was sinbinned for fouling Daly in the build up to the goal.

With a numerical advantage, Gary Daly’s troops would have hoped to push on from here, after a slow start they trailed by just two points at the water break, 1-3 to 1-1 but that was not what materialised.

Four of the next five scores went the way of the Girls in red, as Rice, Boyle (2), and McKenna all pointed from play as Louth took advantage of some poor kick outs from Sinead Byrne who struggled to find a teammate in the second quarter.

When she did find the hands of an Offaly player their forwards were not making it count, Aoife Carey, Roisin Egan and Chloe Sheridan all missing the target, after long build up play through short, accurate kick passes had got them well within scoring range.

In the end they only managed to score once more in the half after their earlier goal, a free from Grainne Egan on 30 minutes leaving them trailing by 1-7 to 1-2 at half time.

The Faithful girls needed to dig deep if they were to play their way back into the contest and hit back with 1-1 in the space of 60 seconds five minutes after the restart, a quickly taken free from Grainne Egan played in Daly who from close range rattled it over the bar.

A poor kick out from Una Pearson would allow Grainne Egan a chance at the goals, firing home her side’s second goal of the evening to leave them just a point behind.

It was another chance for Offaly to push on, however once more they were quickly pegged back by Louth who responded immediately through former Aussie Rules star Kate Flood, who got her hand onto a shot that dropped short from Rice to reinstate their lead.

From there was only going to be one winner, The Wee County turning the screw with some superb attacking prowess that saw them outscore their opponent’s 1-3 to 0-1 in the final fifteen minutes with Flood really showing her quality.

She hit 1-2 of this, her evening topped with a sublime goal in injury time, Laura Collins finding her in space before she calmly hit the back of the net with the side of her boot to rubberstamp Louth’s place in the Division Four Final next week.

It was a fine attacking performance, but with seven wides and a few efforts coming up short, Freeman will have plenty to work on ahead of a shot at revenge against Leitrim who to date are the only side to have defeated Louth. Those misses against a strong Western outfit could be costly.