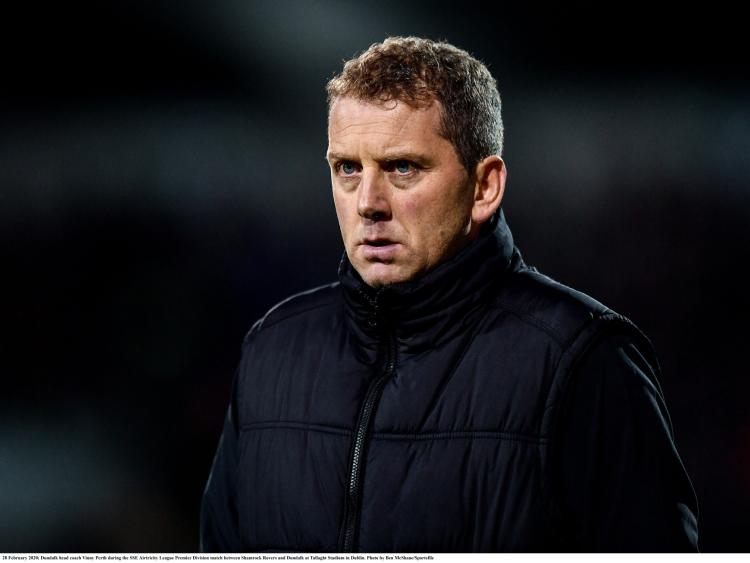 A disappointed Vinny Perth vowed that his Dundalk FC team will “bounce back” from their 3-2 defeat to Shamrock Rovers. (Pic: Sportsfile)

A disappointed Vinny Perth vowed that his Dundalk FC team will “bounce back” from their 3-2 defeat to Shamrock Rovers, when they come up against Finn Harps in Ballybofey on Friday night.

Having fallen behind to Dylan Watts’ opener, Dundalk went 2-1 ahead thanks to Jordan Flores’ acrobatic volley, which defied the laws of physics, in addition to Patrick Hoban’s calm finish.

However, Rovers restored their advantage and emerged victorious in what was a truly pulsating encounter, courtesy of goals from the international duo of Roberto Lopes and Jack Byrne.

“I’m disappointed we’ve come out the wrong side of a really tough game, but full credit to them, they pushed us hard,” Perth told The Democrat following the top- of-the-table clash in Tallaght.

“Ultimately, it’s gone against us and sometimes that happens, but we’ve done enough not to lose that game. We learn from it and we move on.”

Dundalk, who lost a league fixture from a winning position for the first time since 2017, will be eager to get back to winning ways at Finn Park, a ground in which The Lilywhites are unbeaten in 13 years.

“It will be a tough game, a difficult venue, but we’ve got to look after ourselves. We’ve always been good at bouncing back, so we’ve got to try and bounce back next week and take it (their defeat to Rovers) on the chin,” continued Perth.

“We said before the game that we’re better than where we were last year no matter what happens and that’s still the case, but we’ve got to get back on the bike as quickly as possible.”

Electrifying matches played in modern, all-seater stadiums like Tallaght is something that Perth would ideally like to see right across the board in the League of Ireland and he cited the work that has already been carried out by local authorities in different parts of the country.

“This is what you want, you see the job the council do with these stadiums. I’ve seen a picture of Tolka Park today and it looks outstanding, the council are running their pitch as well, so we need to improve our stadiums.

“Some of the goals were outstanding – Pat’s goal was brilliant, Jordan’s goal and obviously the one that won the game was a great goal.”

On a more positive note for Dundalk, Georgie Kelly made his first appearance of the season off the bench, having recovered from a back injury.

This coming Friday could also see the long-awaited debut of Serbian winger Stefan Colovic, who was an unused substitute against Rovers before featuring in a behind-closed-doors frien- dly against Shelbourne at Oriel Park a day later.