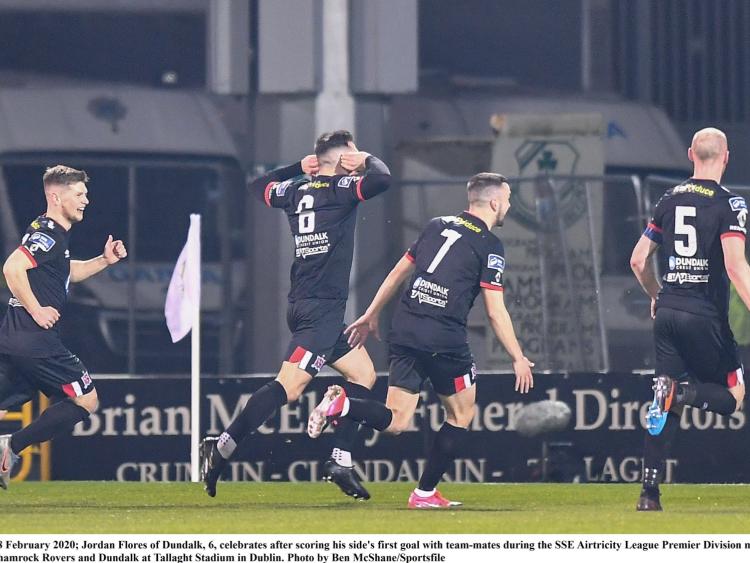 Cammy Smith, Michael Duffy and Chris Shields give chase to a jubilant Jordan Flores after his goal for Dundalk FC in Friday night's defeat by Shamrock Rovers. (Pic: Sportsfile)

The RTÉ pundit took to Twitter to voice his approval, while a host of other high-profile footballers, including Peter Crouch and Jonathan Walters, also commended the left-footed strike at Tallaght Stadium.

Goal of the century, best I’ve ever seen. https://t.co/wyIEAWpXZb

Meanwhile, FIFA tweeted: “A potential candidate for the #Puskas Award? Take a bow, Jordan Flores. Will we see this stunner nominated at #TheBest?”

Furthermore, Spanish sports paper AS called on Flores to be named as the winner of the 2020 FIFA Puskás Award.

Sky’s Charlie Nicholas and particularly Paul Merson were highly complimentary of Flores’ second rocket of the week, following his wonderful finish against Cork City last Monday, with the latter saying: “That’s one of the best goals I’ve seen.”

Sky Sports News called it a “wonder-volley” and featured it on their weekend bulletins. “It’s the kind of volley Zinedine Zidane would have been proud of,” they said of the goal.

France Football Magazine described it as one of the ‘Goals of the Year’, while BBC and ESPN have screened the strike, which has now been viewed millions of times via RTÉ social media platforms alone.