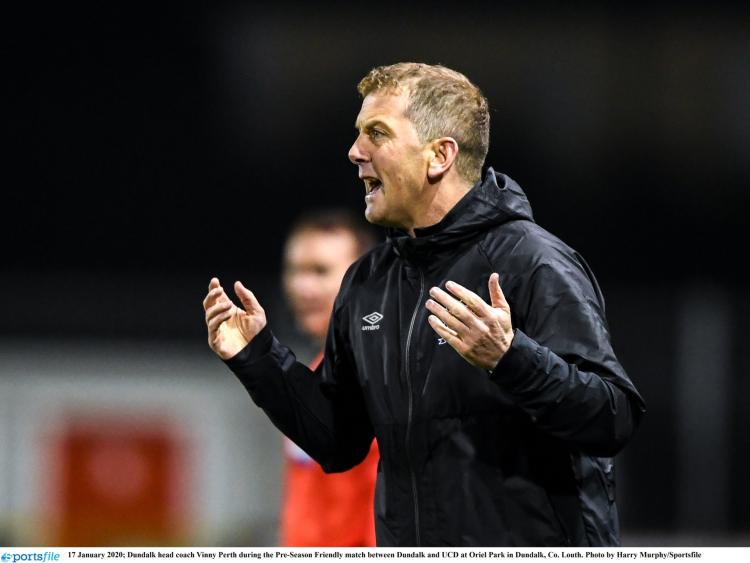 Dundalk FC manager Vinny Perth says he went on a “personal crusade” to play friendlies against both CFR Cluj and CSKA Moscow as part of the club’s week-long training camp in Spain. (Pic: Sportsfile)

Dundalk FC manager Vinny Perth says he went on a “personal crusade” to play friendlies against both CFR Cluj and CSKA Moscow as part of the club’s week-long training camp in Spain.

On Wednesday, The Lilywhites will face Romanian champions Cluj, who are themselves preparing for a Europa League last 32 tie with Sevilla in February. Then, on Friday, in Oviedo, another test against Russian side CSKA, who played in the group stages of this season’s competition, takes place.

“They’re massive tests. We’re really, really pinned to our collar to compete with them, especially in pre-season,” Perth told The Democrat in the aftermath of Friday’s 7-1 win over UCD at Oriel Park.

“I went on a personal crusade just to play them because I really wanted to test our players. I believe it’s a great test ahead of the first game of the season.

“It’s a bit like UCD tonight, I think they will learn a huge amount from that and I think it helps them. We find teams aren’t mad about playing us at times because they fear that type of result, but I think it’s good.

“We’ll go over there and we’ll look forward to it. Everything we do at the moment is geared towards being ready for the first game of the season against Derry, but also, the more we practice playing against European teams, when it comes in the summer, we’ll be ready.”

Perth confirmed that American midfielder Taner Dogan will continue his trial period with the club in Spain after the 21-year-old, Harvard University student played the best part of 30 minutes against The Students.

However, it is unlikely that Gabriel Sava, who also played half-an-hour on Friday, will be re-joining the club, as it is understood that he is only training with the squad with a view to finding a new club.

“He’s someone that we have a connection with within the club and he’s looking at us as much as we’re looking at him and we’ll see where that one goes, but there’s nothing other than the fact he’s here at the moment.”

Dundalk’s three new signings – Greg Sloggett, Will Patching and Darragh Leahy – also got valuable minutes under their belts against UCD and Perth appeared happy with their respective performances.

Patching finished superbly in the first half, while Leahy came on in the second period, chipping in with both an assist and a goal for good measure, much to the delight of the Dundalk head coach.

“Greg Sloggett is someone I hold in the highest regard. He’s got to learn our system a little bit and he’s got to learn a few things and again, the same with Darragh Leahy and Will Patching, the way he took his goal was brilliant, but very few players over the years come into our club and hit the ground running.