Dundalk FC to pack a power punch? These days should not be taken for granted - second leg overview 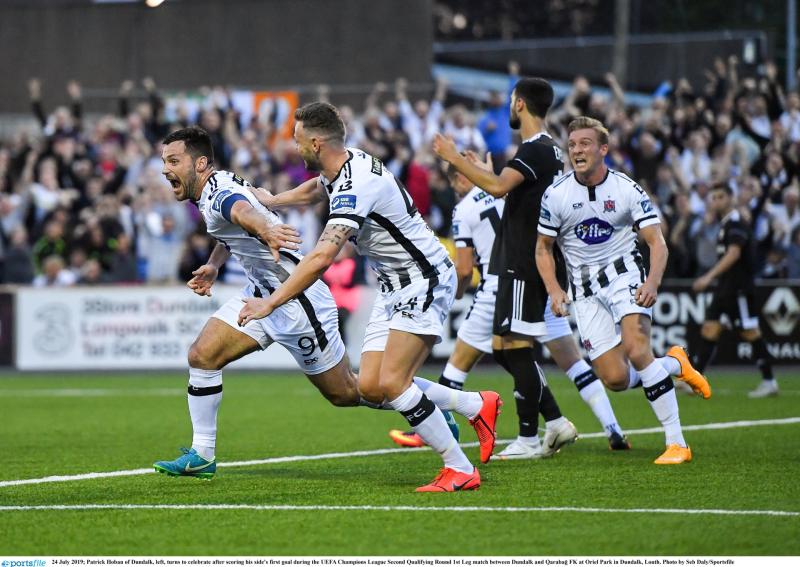 If it was a boxing match, it would have been stopped long before Patrick Hoban’s 78th minute hook brought Dundalk off the ropes. But the Irish champions need much more to land a knockout blow on what Vinny Perth believes is a club just below the class of Europe’s heavyweights.

In the end, Dundalk should have come from behind to win the first round of this bout – of that, there is no doubt – after another special European night at Oriel Park.

For almost 40 years, Tommy McConville’s miss against Celtic has been talked about. That, of course, cost Dundalk a place in the European Cup quarter-finals.

These are different days in footballing landscape, but Dane Massey’s injury-time miscue against Qarabag will long be remembered if The Lilywhites lose narrowly in Azerbaijan on Wednesday.

Jamie McGrath and Michael Duffy were also guilty – either side of Massey – of spurning late opportunities to snatch victory, as Dundalk, from nowhere, came out swinging. 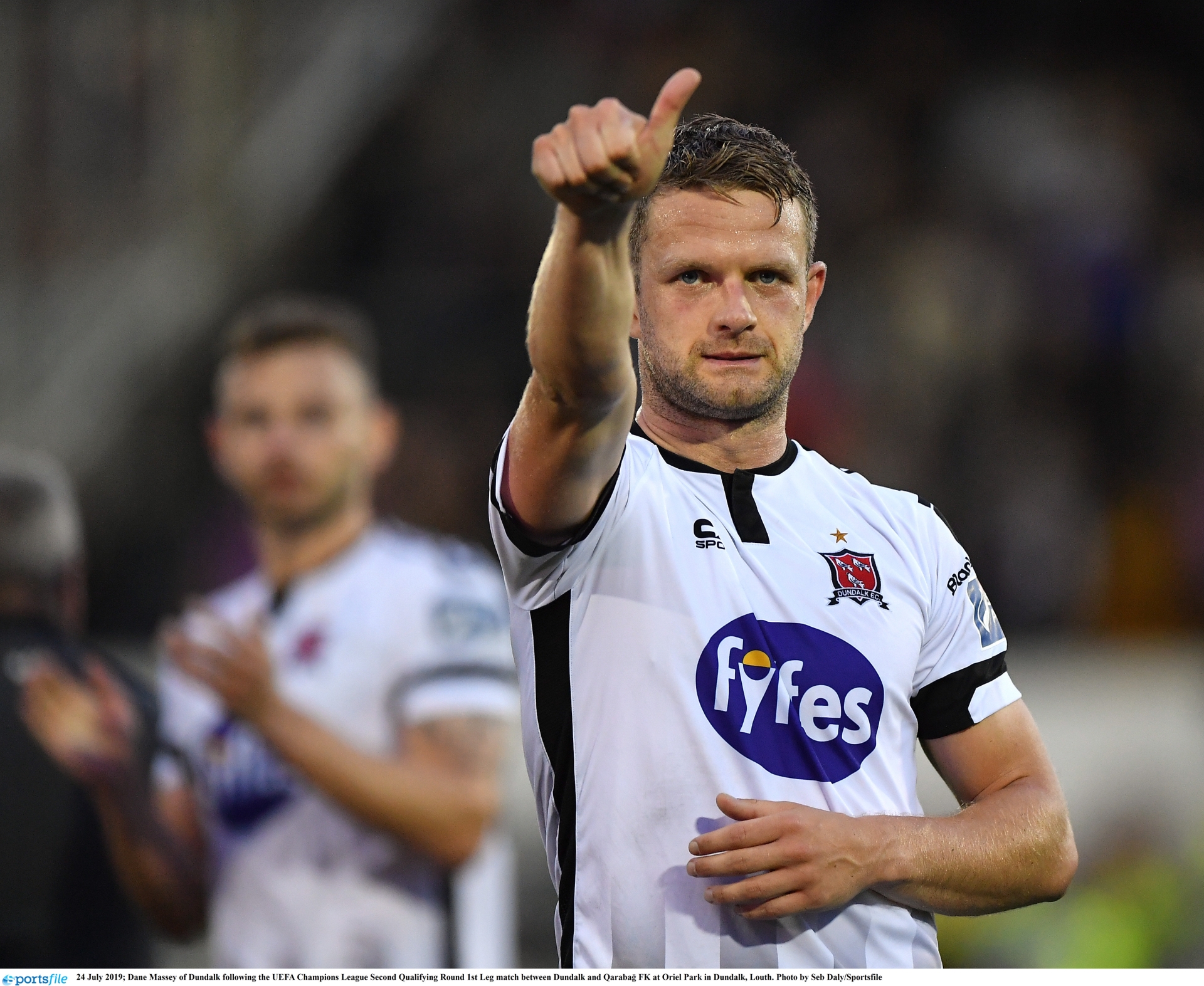 However, it should not be forgotten what went in the 77 minutes before Hoban’s header turned the tide. Qarabag – an early goal to the good – appeared a different class to Dundalk for most of the match, and may find another gear for the decider in Baku. Only time will tell.

Dundalk, though, had made their pre-match objective clear – to keep the tie alive – and they remain very much in contention for a place in the UEFA Champions League third qualifying round. A win would bag an additional €500,000 and, at worst, guarantee a Europa League play-off place.

“We were unlucky not to win the game and we’re actually disappointed we haven’t won,” Vinny Perth stated after the first leg.

“But we’re still in the tie. We go to Qarabag with a real chance and a real belief that we can do something.”

“That’s difficult – we’re operating against a club that are just below the really highest level of European football. We’re going to have to dig in.”

Dig in, they did already. Mahir Emreli’s fourth minute header put Dundalk on the back foot, and when Qarabag threatened to make it 2-0 moments later, it appeared a long night was on the cards.

However, with Chris Shields instrumental, they staged a stunning fightback, and the experienced midfielder says they have to be happy with their response.

“We could have easily been a few down at half-time,” Shields admitted. “To claw ourselves back into the game with a strong second half performance, all in all, we’re still in the tie, which was the main aim.

“The early goal completely takes your game-plan out the window. Qarabag are experienced European players, they’ve been there before and they know how to control a game. So, it took us until half-time to get in and sort ourselves out. Thankfully, we did that.”

Shields has been there through it all with this great Dundalk team, and he will be a key player in the return leg if they are to continue along the Champions League path.

He, like everyone, knows they should be taking a lead on the adventure to Azerbaijan. But he knows, too, that they are the moments which can make the difference at this elite level.

“We were unlucky not to win it, but they are the fine margins in Europe,” the 28-year-old said. “To be fair, had you given us 1-1 given the first half display, we would have snapped the hand off you.”

PREVIEW | Good news folks - #DundalkFC winger Michael Duffy made it onto the flight today. Before we boarded, he looked ahead a big European trip and Wednesday's @ChampionsLeague qualifier with Qarabag. #QARDUN #DundalkInEurope

Qarabag have mixed it with Atlético Madrid, Roma, Chelsea, Arsenal, Tottenham Hotspur, Celtic and many others in continental competition in recent years. For the team, and management staff, to be so disappointed to only draw with them is a sign of the times that Dundalk FC finds itself in.

These days should not be taken for granted.

Growing up in the nineties and noughties, the halcyon days of the 70s and 80s – and all those high-profile European ties – were ones that the younger generation could only dream about. Indeed, the 1979/80 European Cup run produced the 2015 documentary ‘Once in a Lifetime’.

But this really is. This is the golden era. Between 1963 and 2010, Dundalk played 44 European games. Wednesday night in Baku will be their 28th since 2014, and they will make it at least 30 before the summer is out.

The draw against Qarabag also meant more than just levelling this latest tie. It means Dundalk are now unbeaten in their last seven European outings at Oriel Park, since 2015, and within one of the club record.

That eight-game sequence was between 1976 and 1981, when Dundalk matched Celtic, Tottenham, PSV Eindhoven, Porto, and beat some lesser lights.

The ‘home’ leg of their next tie must be played in Tallaght. It’s a reminder, not that any is needed, of how Oriel Park has not moved with time. What a pity it is that this Dundalk team must wait another 12 months to equal that proud, long-standing record.

However, that said, a new stadium would certainly not have the charm that Oriel holds. There is no doubting the role that the old ground played in stifling Qarabag in the final 15 minutes. It rocked and Dundalk responded. That was not lost on Perth, either.

“I thought the crowd played a massive part,” he acknowledged. “It was a very special night in Oriel. The last 5-10 minutes were outstanding and it really gave us a huge lift.

“I’ve been here 6-7 years and this was one of the more memorable nights I have. Obviously, we’ve won leagues and trophies here, but there was something different in the last 10 minutes. The players responded to what the fans gave them.”

It shook Qarabag, too, with the much-fancied Azerbaijani champions begging for the bell in the closing stages.

“They know we’re better than what we showed in the first half. They saw the real us in the second half, and we will certainly be going over there looking to get a win.”

For all its faults, there is something extremely special about Oriel and, whatever the outcome, it has helped to shape another huge European night for these players, who continue to punch above their weight.

Roll on Round Two!